By Edward W. May
You must leap in fancy, leagues and leagues over strange lands and stran­ger seas, into the proper territory of that marvel-maker Kipling, whose tales and verse you love so well. You must set your steps straight on the road from Man­dalay and keep a staunch stride until you find yourself in the heart of Rangoon. Here halt, and gaze in reverential awe upon the Golden Pagoda. The Buddhist shrine means little to your first glance, as St. Peter's at Rome would mean little to a servant of Buddha. Try to feel that in the Golden Pagoda you are considering the St. Peter's of the faithful worshipper of Buddha.
Not many paces to one side a pavilion of rich and curious architecture lifts itself slowly toward the sky. In the sun the gold crest of the pavilion shines dazzlingly and with its brilliant flare gives a wel­come to the far-off ships bearing down the river Irrawaddy. On the ship's deck are strangers bound to visit this rare domain. Inside this gorgeous pavilion is hung the big bell of Burma, the biggest bell, doubtless, in all the broad world. From top to bottom and all around the exterior surface the bell is graven with signs and letters of the people. Inside the dome ten of the tallest and stoutest giants of a football eleven may stand comfortably and with full breathing space. The tallest of these, and he of most extensive, reach, may stretch forth his right arm till his muscles twinge and the blood in his finger-tips prick his skin, and he will barely touch the sharp rim of the big bell. There is no clapper to the bell. From the outside swings a tremendous bronze beam, falling with rhythmic beat on the heart of the bell and sending forth shuddering a message of faith to just and unjust, to pious and impious. For many miles the melody vibrates on the clear air. No bell is so rare in sound, none so rich in memory; and each succes­sive tone stirs the store of recollection in the minds of the worshipful. 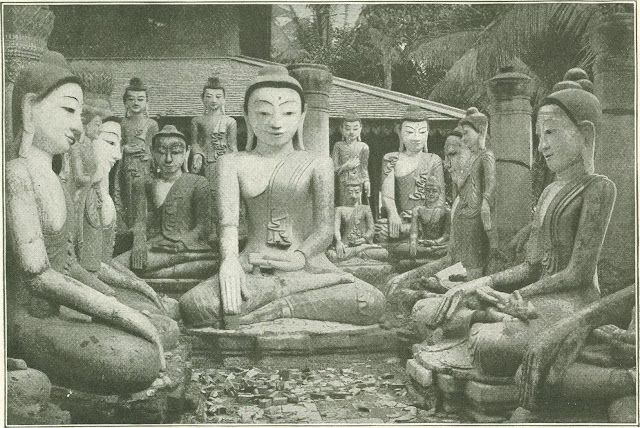 Scattered about the lower shrines are statues of the last Buddha

Email ThisBlogThis!Share to TwitterShare to FacebookShare to Pinterest
Labels: Burma