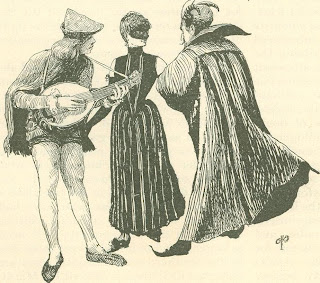 Sixty odd years ago, after a short but merry life in France, a number of gay  young Creole gen­tlemen half-intoxicated with Parisian pleasures re­turned to the province of Louisiana, resolved to impart at least a semblance of French frivolity to pretty Spanish New Orleans. They had gone abroad, as the scions of all fine families were accustomed to, for the acquisition of European culture and learning. It would scarcely seem, however, from the determined spirit of jollity with which they re-crossed the ocean, that their deep­est impressions were received from lec­ture halls or academy; rather the boule­vards on fête days, when the people en masse went forth to recreate in the sun­shine, and honor meanwhile some con­venient saint or hero. The task they had set themselves was easy enough of accomplishment, for from the earliest days Mardi-Gras in this sleepy Gulf-town had been held an occasion for feast­ing and high revelry. The first colonists from France and Spain had introduced the Carnival customs, familiarizing the  public with the unlicensed fun attendant on that season. To the very questionable propriety at that time of certain brilliant balls on Orleans and St. Louis streets, must be accredited the shade of doubt cast over Shrove Tuesday indulgences. Then, too, numerous street brawls fol­lowed Mardi-Gras maskings. Under their dominos, political and social ene­mies often sought opportunities for aveng­ing themselves, and rarely did the holiday end without one or more fatal encounters. Having no acknowledged leader, and each masker being on the look-out for adventures grave or gay, the results were so serious that the city became aroused to the necessity for a new order of affairs.
The love of more wholesome revelry was ripe, only needing one potent touch to stir the entire community into anima­tion. This was demonstrated by the cordial response accorded the suggestion made by these young sprigs of Southern aristocracy. Immediately upon their re­turn from the Continent, with high-spi­rited Mandeville Marigny at their head, they organized the first grand Carnival procession ever seen in this country. And very splendid, showy pageants they were, unique conception carried out with extreme lavishness of color and richness of design. Unqualified success crowned their first efforts, and who will wonder now that with the sanction of half a cen­tury resting on its observance, this insti­tution has grown to be an inalienable part of the city's life and rights?
Year after year New Orleans has en­tered upon her dark Lenten penance with the maddest, merriest, and most sumptuous fete known to either conti­nent. Jovial Shrove Tuesday is the brill­iant threshold through which her peo­ple pass into a long season of humility. For one day, at least, the city lives up with all her might to the cheer­ful adage of "eat, drink, and be merry, for to-morrow we die," and not till the Carnival moon droops low before the light of a pale Lenten dawn is any cognizance taken of remorse to come. 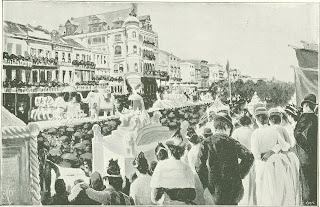 This very intensity of purpose and ab­sorption in the feast, is the true reason of New Orleans' supreme success in her Car­nival. Elsewhere, the public argues of benefits to accrue, and makes vigorous efforts to assume the gay abandon sup­posed to be part of the program. Un­der colder skies they masquerade with eye and sober faces, yawn dismally un­der their dominos, and in the end achieve hopeless failures. None who have had the good fortune to celebrate Shrove Tuesday in the Crescent City will need to be reminded of how different is the fete by the Southern coast. Saints' days are respected. Christmas is revered, but Mardi- Gras stands far and away the first feast in the calendar. A week in advance old and young are assimilating the spirit of misrule animating the town. The social pulse that has quickened as the winter waned, fairly leaps then with a glad, un­reasoning joy; the Carnival dominates everything. The half-mystery envelop­ing Rex, his court and "krewe," only adds a keener zest to sparkling curiosity, ready at any moment to be fanned into a zealous flame among his faithful sub­jects. Every season the same pretty fool­ing interests and amuses the people. Long in advance of his arrival, heralds proclaim the king's coming, and the so­berest sense finds it difficult to combat a latent childishness that is touched and tickled in each heart by this sort of thing.
It happens, sometimes, that aliens laugh in their sleeves over New Orleans' rapturous enthusiasm, and the lavish ex­penditure she makes of her wealth at Mardi-Gras. They say the quaint old town is but a sham, a poor wench, after all, patching broken roads in secret, strewing roses over her ragged outskirts, screening tumble-down dwellings behind abundant vine-draperies, that once in a year she may sup with royalty, take a king for her mate, and ask the great world in to famous routs and revels. It is the veriest churl, however, who could lack sympathy with the spirit of mimicry, masking, and fun that possesses the pop­ulace. Every pickaninny in the streets wears his false-face with the grace of a jolly knave. His stout legs thrust in harlequin small-clothes, a pinked jacket to his back, and lance of rush or cane, the ragamuffin makes himself one of his majesty's court, whistles shrilly with the band, and finds no obstacle to joining himself with royalty for one long day of delight. 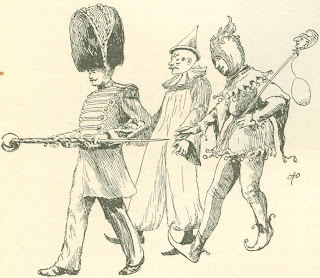 If the Carnival puts money in her purse, surely the city wins shekels from the strangers in a goodly fashion. Before visitors are invited to enter, nature is busy with manifold gracious preparations against their coming. Every olive-bush in the land blooms suddenly with myriads of ivory stars, shedding forth tremulous floods of rich perfume; gardens are lit with multitudes of gold and crimson rose-cups, while the oaks, young and old, are marshaled, every one, to hasten on their fringed robes of spring verdure. A million snowy censers spring from the dark-leaved orange trees that burst into a fury of blossoms, loading the balmy air with a fraught of delicious incense. All that an equable climate and soft temperature can do is accomplished in those days of a late Louisiana winter. The blue, wind-swept arch over­head, dyed a deeper azure, is flecked with feathery clouds, strewn artistically across the wide expanse. Who cares under such conditions to quarrel with surface-drainage, or find fault with local color, in the way of varie­gated street smells? On every corner a picturesque old negress is busy tying up big nosegays of lilies, orange blossoms and magnolia fus­cati, that one may lay across one's lips while passing the worst places.
War and pestilence dis­figure the years when the city has forgotten to reverence Mardi-Gras and its mystical sovereign. As season succeeds season, the public has marveled, laughed over, and wildly applauded long lines of brilliant Carnival floats, picturing to them the heavens above, the earth beneath, and inhabitants of waters under the earth. Gods, demons, giants and fairies, history, romance and nature, even the human passions themselves have served to furnish tableaux in countless forms and colors. Long glittering trains are lit with blazing torches, accompanied by the blare of bands and the shouts of an enraptured multitude. 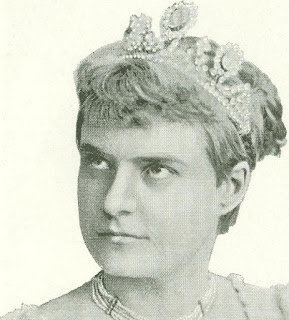 It would seem that with such constant demands, fine illustrative subjects would finally become exhausted. But wit and trained talent are brought to bear evolv­ing each year a mine of pictorial wealth. From three to five mystic orders are en­gaged annually for months in advance preparing for their parades. The "Comus Krewe," supposed to be almost exclu­sively composed of older men from the Pickwick Club, appeared for the last time in 1884, after twenty-seven years of un­qualified success in their annual celebra­tions. A genuine sensation was created by the first illuminated scenic procession that moved upon vans or cars by night. After passing through the principal streets they gave a series of striking tableaux, and concluded the evening with a splen­did ball in one of the old theaters. This was before the war, in 1856, and although political disturbances and fever epidemics twice forced the Myths to remain in ob­scurity, Comus kept faith with the city until finally swallowed up in impene­trable seclusion. The reign of the glorious god of mirth was a triumph from both an artistic and social point of view. His pageants were superb creations, illustrating Lalla Rookh, Spenser's Faerie Queen, Homer's Iliad, and like ambitious subjects. From the ball decorations of the French Opera House to the steel-plate engravings on cards, whereby the invita­tions are sent, every detail was costly and correct. His taste was faultless, and the season's beauty asked no higher distinction than to find favor in the eyes of Comus and his courtly re­tainers. Some stately cor­respondence is extant between Comus and the Duchess of the Silver Whistle, no other than Miss Cora Slocum, at pres­ent the Countess de Brazza. And Mr. John A. Morris's beautiful daughter, the morning after her reign as Carnival Queen, in 1882, wrote:
"Though bereft of all my dignities, and this morning only a simple republican, I cannot refrain from sending to Comus my acknowledgment and appreciation of the distinguished manner in which he received me as Queen last' night.
"The reception gracious, nay, cordial, the exquisite offering of flowers which greeted me, were, indeed, sufficient to have won my heart; but Comus, always princely, was not content With this, but on his own arm took me upon the floor among his guests, thus adding the high­est compliment which he could possibly offer.
"With thanks, many times repeated, I remain,
"Most cordially,
"FRANCES ISABEL MORRIS." 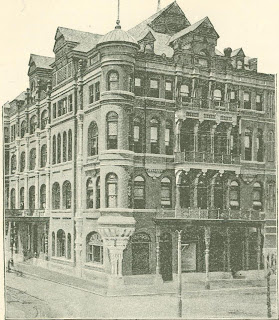 In 1872 a new order known as the Knights of Momus came into existence. Its first parades were held on the last day of each year, but in 1876 the date of the Momus processions was changed to Car­nival-week. Fourteen times has the gallant deity and his band of devoted knights visited the Crescent City, pic­turing from year to year "A Dream of Fair Women," "The Moors of Spain," "The Romayana," and "Legendary Lore." Last winter, after lying dormant for several seasons, Momus emerged to present Rodman Drake's exquisite poem "The Culprit Fay." It was impracti­cable to give the charming story in a street pageant, but in pantomime and a series of gorgeous tableaux the erring fairy's fate was illustrated on the stage of the Grand Opera House. Until twelve o'clock an audience, comprising the wealth, beauty and fashion of the town, sat enjoying the rich scenic effects pro­duced, when, at the hour of midnight, the Lord of Raillery stepped down, and amidst a bevy of fair women chose his Queen. Momus has selected the Thursday before Mardi-Gras for his annual appearance, and is making extended preparations now for a grand pantomime and ball at this approaching Carnival.
The Twelfth Night Revelers," with their secret association, pictorial proces­sions and masked balls, are usually in­cluded in the Carnival attractions, al­though they have always celebrated a fixed festival twelve days after Christ­mas, while Mardi-Gras is a movable feast depending on a certain new moon. The Revelers have either ceased to exist, or fallen into a deep sleep, nothing having been known of the scarlet dominos for a number of years. 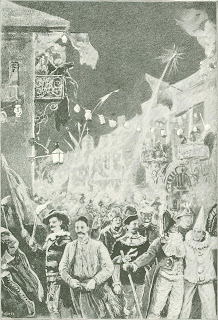