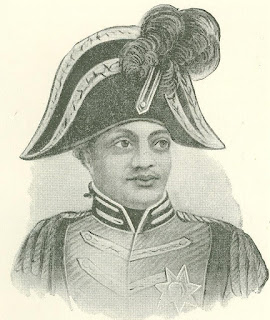 One of the most remarkable men dur­ing the days of travail and suffering of poor, bloodstained Hayti was Henri Christophe.
He was born a slave in the island of Grenada, in 1769, was sold to a dealer in Cape Haytien at an early age and was for some time a waiter in a café. As he matured, he became remarkable no less for his size and herculean strength than for his savage and indomitable spirit.
There is nothing on record as to when he became a soldier, but he must have served with the black deliverer Toussaint L'Ouverture, as he was a general and gov­ernor of the Cape in 1801, and had then been welded into the "man of blood and iron" he was ever afterwards.
During his youth, the terrible cruelty practiced on the slaves by their French masters had caused them to unfurl the black flag of servile insurrection, and a war was begun that spared neither age nor sex.
On the one hand, the planters pursued runaways with bloodhounds imported from Cuba, which devoured them alive, or lashed them to death; and the French troops under Rochambeau and Leclerc, tiring of slaying by bullets, loaded hulks with prisoners and towed them out of the harbors to sink them with their living freight. On the other hand, the slaves, even under such comparatively humane leaders as Toussaint, took no prisoners, but after he was kidnapped, under pecu­liarly revolting circumstances, and was succeeded by the "butcher" Dessalines, the country was inundated with blood.


The blacks, half savage and wholly brutal, tortured all who fell into their hands. Neither age nor sex was respected. 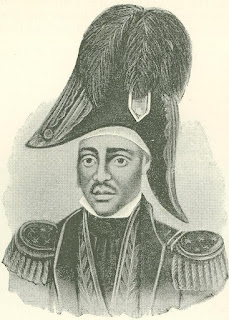 Some were burned alive, others were lashed between two planks and were slowly sawn asunder, to the horrible accompaniment of the tortured one's frenzied shrieks, or, if females, done to death by even more revolting means. At last Dessalines, maddened at the wholesale massacre by the French of all their prisoners at Port au Prince, ordered all the whites in his lines to be slain. So well was the order obeyed that at St. Marc alone no less than 800 perished.
Unhappy Hayti! once called "le para­dis des Francais," it was now one vast charnel house. It is a matter of record that in a frantic effort to retain their rich­est colony 50,000 soldiers and sailors were sent out from France in the years 1802 and 1803, and they tell with considerable mi­nuteness how no less than 35,000 of them perished by war or sickness in nine months, 23,000 civilians of various ranks being slain at the same time.
During these inhuman scenes Chris­tophe's ability, as well as his native sav­agery, won him a conspicuous place, so that when the “butcher " Dessalines was killed by a faction of his own troops Christophe succeeded him as president of the republic; and, what was of more con­sequence, secured the immense treasure Dessalines had "looted" from the French, estimated at $30,000,000.
As the government was a military des­potism, pure and simple, it was not long before the country was split up into three portions, Petion ruling the south, at Port au Prince, as a president, while Chris­tophe made himself king of the, north, at Cape Haytien which had been the very centre of French ostentation and power, and where today, despite the ravages of earthquakes and the no less destructive hands of the blacks, one is astonished at the extent and magnificence of the ruins. At the same time he created a large nobil­ity, many of the titles smacking strongly of opera bouffe, the "Prince de Lem­onade," "Duke de Marmalade," etc. though in reality they were the names of important provinces. 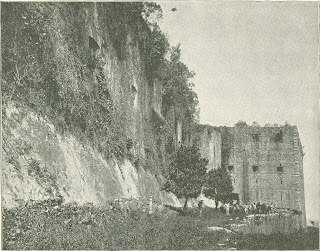 During nearly all of Christophe's reign there was the peace of the lion and the lamb between the blacks and the French. There were simply none of the latter left to fight; but the natives did their best to keep up the excitement by bloody feuds among themselves. Then, as now, the blacks were arrayed against the  “men of color," as the mixed breeds were called, but the iron hand of the king pressed with such merciless severity on all alike that the disturbances were soon suppressed and the northern part of the island at­tained a growth and prosperity never reached under any other ruler.
With the possession of almost incalcu­lable wealth came ambition to figure as one of the great monarchs of the world, and this ambition is said to have been fostered by an unfortunate Frenchwoman who had fallen into his hands soon after Dessalines's death. Her great beauty made him an easy conquest, and he spared her life by giving her a worse fate. She was a woman of ability, and soon ac­quired unbounded control over his rude and superstitious nature.
Directly inland from the Cape lies the extensive and fertile plain of Millot, embraced in the protecting arms of the mountains towering above it. Under the French taste great wealth had made of it one of the fairest spots on earth. Here, prompted by his unhap­py mistress, he determined to build a palace to rival Versailles in beauty and extent. He first turned the vale into an exquisite park, destroying all the houses that had once sheltered so many proud and ostentatious planters. Then, securing the services of some of the first architects of Europe by his lavish remu­neration, he laid the foundations of the most elaborate and costly buildings ever erected in the New World.
Having at his command all the peas­antry, backed by a numerous army, the walls rose like magic, and in an incred­ibly short space of time "Sans Souci," as he called his palace, invited him to for­get his cares and be happy with a pomp and barbaric magnificence hardly ever equalled.
The architecture, while imposing, was not in good taste, and the lofty and spa­cious rooms, with floors and side panels of polished ma­hogany, or beautifully inlaid with the most expensive Flor­entine mosaics, were spoiled by the superabundance of ornamentation. The throne room, rivaling in its propor­tions the state apartments at Versailles, was a mass of gilt and gold, fairly dazzling to the eye. On the apartments of the queen and the prin­cesses money was lavished without stint, and their baths, which can still be seen, are marvels of the purest white marble. 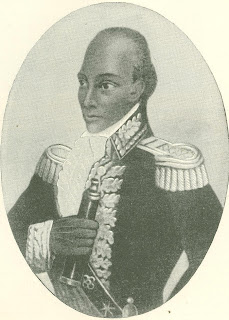 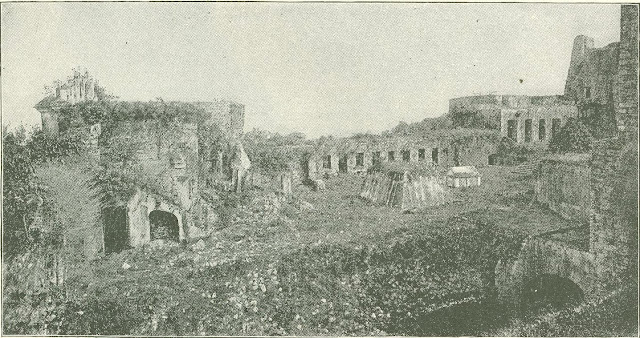