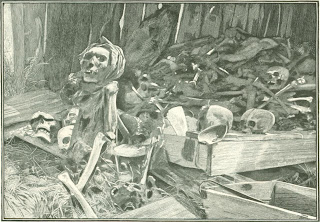 Some of the little islands in the Colum­bia River have ghastly associations. The traveler, intent upon the mountains, will scarcely notice the low, sage-covered stretches of land which every few miles dot the stream, ignorant of the fact that some of them are devoted to one of the strangest practices of the aborigines. The Indians of that region have from time im­memorial brought the bodies of their dead, carefully prepared for preservation, to these islands, where in huts prepared for them they were left to await the summons to the happy hunting-grounds. The in­trusion of the whites has nearly stopped this custom, on account of their molesting and mutilating the dead.
There were two of the Mimaluse (death islands) near the town where I was staying, and in consequence I paid a visit to one of these, choosing that which best showed the devastation that is overtaking them all.
The ruin has not been wrought by the settlers, but the tourists seem unable to visit these places, sacred to the red man, without carrying off some souvenir of the trip, and they are sure to walk away with skulls and bones, or sometimes a whole skeleton if a particularly perfect one is seen.
But no such unhallowed desires filled the hearts of our party as we put off from the shore one beautiful March morning. An Indian guide stood sponsor to the guard upon the island for our good behavior—for the red man has taken this method of pro­tecting the bones of his forefathers, after having appealed to the best instincts of his white brethren, which did no good, and to his government, which did but little more. The burial islands are well patrolled in the daytime, but the Indian has too wholesome a fear of the spirit world to allow himself to stay in such a city of the dead after nightfall - when, of course, vigilance is most needed.
We could see, on approaching the island, a very modern-looking tombstone, but that had nothing to do with the Indians. It marks the grave of a white man whose whim it was to he buried there.
The island is small and could be thoroughly explored in a couple of hours. It is of lava formation, the rock being plentifully covered with fine white sand, and on the high ground, where the death huts are, the coarse grass grows high and thick.
The little shanties for storing the bodies are of rough, unpainted boards, and so near the color of the sagebrush as to be quite unnoticed from the river.
Before being brought to Mimaluse the dead are tightly wound with many band­ages, but whether the material be fine muslin or a gaudy patchwork quilt, it is done with loving care, and to this is due in large part the excellent preservation of the bodies. An outside wrapping of rope completes the burial costume. 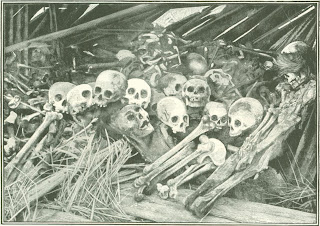 The face has a mere cloth covering, which in time becomes a veritable mask. I looked through a large crack in one of the boxes in which a number of bodies were stored, directly upon the face of the topmost one, and could scarcely believe it embalm them; there is no secret process, as some have thought. The balmy breezes from the ocean perform the work thoroughly and well. This disposition of the dead was orderly and respectful until the white man came. The redskins, with simple rites, laid the forms of their loved ones in their resting-places in the boxes within the death huts of the Mimaluse. By their side were placed the implements they used in life - pots, pans, spoons, etc., all strung together. Sometimes there were articles of value, quaint carvings and arrow-points, covered with a cloth, so perfect was the outline.
Some of the huts were in complete ruin—the boxes broken, and the place one mass of bodies, most of them pulled apart and the bones scattered about. I found a little hand, beautifully formed, some dis­tance from one of the houses, and farther on a foot that evidently belonged to the same body. Both were covered with skin which was as light and dry as parchment. The preservation of the bodies was remark­able, although the Indians do nothing to and it was the worth of these that started the desecration of the islands and turned them into gruesome spots, revolting to one accustomed to well-kept cemeteries.
A year or two after my visit the waters of the Columbia rose to an unusual height, and I afterward learned that the island I had explored had been entirely submerged, and that the receding flood had left little upon it: huts, bodies, bones, the cause of so much heartburning and contro­versy, had gone where they would never be disturbed.
Originally published in Cosmopolitan Magazine, January 1899.
----------------------------------------------------------------------------------------------------