Doctor Koch and His Lymph Kochine Physio­logical Society of Berlin 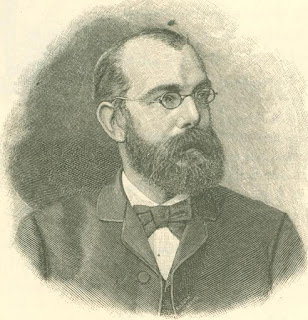 There are few events in the history of medicine which have excited such worldwide interest and profound admira­tion as the recent discovery of Professor Robert Koch of Berlin. He is the man of the day. One that lives in Berlin is apt to think that there is but one living man and one live topic worth talking about—these are Koch and Kochine. Before Doctor Koch read his remarkable paper in 1882 (he was then thirty-eight years of age), on the bac­illary cause of consump­tion, before the Physio­logical Society of Berlin, no one had heard of him Yet Koch was for many years before this an ardent student of the micro­scope, and al­though the world knew little of the coming man his numerous friends prog­nosticated a grand future for him. The paper above mentioned de­monstrated to the public that in Koch we possessed an indefatigable worker, a thorough scientist and an insatiable investigator. The com­munication caused universal sensation. The cause of an ever-present plague that destroys human life to such an extent that fourteen per cent. of all deaths are due to it was incontrovertibly proven by Professor Koch's paper to be the growth and multi­plication of germs or bacilli which, either by their own influence or by means of chemical substances they produce, act de­structively on lung tissue and any other tissue that affords a soil for their growth.
At this day there is scarcely an earnest, scientific physician who does not recog­nize the bacillus as the cause of lung con­sumption. Shortly after this communica­tion Koch was rewarded by an appointment at the Berlin Hygienic Institute and a pro­fessorship at the university, ample oppor­tunity being thus afforded him for further researches in the line of investigation which he had followed. A few years ago Koch was sent to India by the government to investigate the cause of Asiatic cholera, and succeeded in discovering the microbe which is at the bottom of the disease. The next step to­ward progress was, of course, to prevent or cure these con­tagious dis­eases; and Koch has de­voted his clos­est attention to this subject for some years. On November 14th he announced, in his famous publication, that a cure for consumption had at last been found, and this it is which bestirs the world at the present time.
Koch is a man of small stature but good development, with sharply cut features and a face that beams with intelligence. He is a typical German. He cannot now take his glass of beer in the company of congenial comrades at his usual resort on account of the crowds who wish to see him, but formerly he was often seen to enjoy himself, like most of his colleagues, by chatting over the beer table. There is a frankness and a friendliness in the conver­sation of Professor Koch which cannot but make a favorable impression, and a simplicity which is found predominant in nearly all great men. In spite of the great number of people who seek an interview with Professor Koch, he does not deny him­self to anybody, and everyone carries away a pleasant recollection of the scientist.
If the document of November 14th, in which Koch announced the cure of con­sumption, had not been written by a man whose thorough­ness and reliability were accepted facts, it would hardly have been noticed. But coming, as it did, from the infallible Koch, the publica­tion fairly bewildered the medical profes­sion, and moved thousands of consumptives to migrate to Berlin in the hope of restoration of health. Money came pouring in from emperor, government and citi­zens for promoting the extensive study of the discovery; hospitals are being erected, with a special view to the observation of tuberculosis in all its phases, and German enthusiasm knows no bounds.
We shall see in the course of this article that the discoverer himself permitted his enthusiasm to get the better of his logic, and that today, after several months' ex­tensive experimentation on human beings in many public institutions, the prospect­ive cure of consumption, even in the first stage, is far from being certain. But it is true that most wonderful improvement has occurred in many instances, and that the future may record complete cures.
The medical colleges, hospitals and hotels of Berlin present a picture which probably has never been seen before. In some hotels there are so many consump­tives undergoing treatment that one is reminded of a hospital. The corridors and reading rooms resound mournfully with the cough of hollow chests, and many doctors are present to discuss the situation. The undertaker completes the picture. For it is not uncommon to see funerals at the hotels since the poor creatures who have been "given up" by their doctors at home began their pilgrim­age to Berlin. There is hardly a civilized language which one does not hear in this motley assemblage. Frenchmen, Italians and Spaniards manage to understand one another and travel together in hunting for lymph. The dark-visaged Turk, Rouma­nian and Hungarian are found in another corner; the tall and slim-figured American is forever busy, and gets more information in one day than the lazy Orientals in a week.
At the Hygienic Institute, where Koch's laboratory is situated, the applications for instruction are so numerous that no chance for new students will exist for some time. The hospitals are overcrowd­ed and patients generally have to wait for vacant beds. The visiting physicians are surrounded by eager medical followers, and they are indeed happy when the day's work is done. The universities are crowd­ed to overflowing not only in Berlin but in smaller German cities, and even Vienna gets her share of increased attendance. 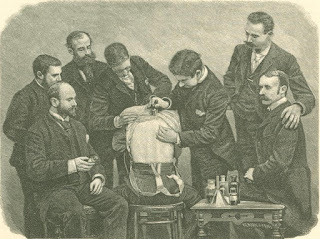