A brief study of the art and the personality of the famous Parisian actress, with portraits of her as she appears in some of her best characters. 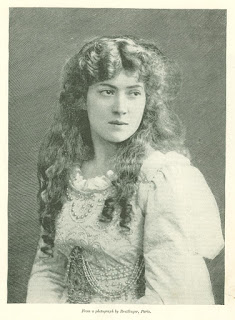 Madame Jane Hading - who isn't Jane Hading at all, but of that anon - is an accident; a happy, in many respects a delightful accident - still an acci­dent. Here it might be well, perhaps, to pause and remark that there are not a very great many actors and actresses whose suc­cess has not been due to fortuitousness; or, to speak more exactly, whose opportunity to display ability was not accidental. "Ostler Joe's" felicitous drawing room debut gave the stage Mrs. Potter. The un­expected badness of a Delesparre years ago, in Dublin, when Helen Barry was reveal­ing judicious Boucicaultean teaching as Armande in "Led Astray," led to Kyrle Bellew's trial rehearsal in the part.


Was Hading a conservatoire pupil? Surely not, My first recollection of her is that some leading woman in a play running at one of the principal theaters of Paris was taken ill, and Jane Hading, who was either "supering," or playing an unimportant part, came forward to substitute for the in­disposed "lead" at a few hours' notice. How did she know the words?


Here I'm reduced to gossip, and the “gyp” of that hour was that the manager was particularly interested in and benevolent towards the long, lithe girl who was soon to win fame as Jane Hading. She must have satisfied requirements on this occasion, for my next reminiscence is that the manager in ques­tion - Victor Koning, of the Renaissance ­abandoned benevolence for responsibility and acquisitiveness, This latter quality displayed itself not only in marrying a charming woman, but in controlling the immediate earnings of a promising actress, and the subsequent money value of a new star. I hope I am not doing this gentleman scant justice in these remarks, but in those days we had a definite impression that the marriage was distinctly worldly on both sides. 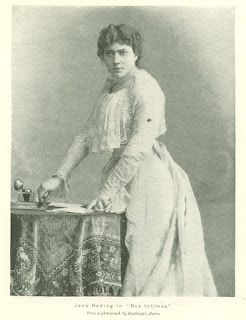 Jane Hading's charm, it is said by her fellow countrymen and women, is her lack of Frenchiness, An inspection of the illustrations accompanying this article at once reveals the fact that the charac­teristics of French features are conspicuous by their absence, As an experiment, the pictures were shown to a number of people, and the question asked, "What should you take to be the nationality of this lardy?" Of those who did not recognize her identity, the major­ity said "English," a few "Amer­ican," one “Russian." In the early days of her career there were numerous on dits announcing that she was English, The name she bore - whether hers by right or by selection - gave color to this, As to its origin, a good guess would probably be that the Parisian manager, already mentioned, said unto his shrewd self, "Here's a tall, beautiful woman who can act. The English craze is just setting in here, An English name and a few judicious paragraphs will set tongues wagging," And the tongues did wag.

The face of this actress is worth attentive study. Not so beautiful as Mary Anderson's in feature, perhaps, but with a style of love­liness more useful on the stage, for it is desperately hard to get expression into perfect features. They are despair­ingly immobile; emotion finds little or no anchorage upon them; whereas on irregular physiognomies there seems to be holding ground for such immediate revelations of the thoughts that speech is accessory rather than necessary. Jane Hading's eyes are almost marvelous. No mere picture, however carefully selected, can do justice to the "windows of her soul." She is tall, thin, and graceful in her stage movements. She weighs what women of her age ought to weigh, and not what too many successful stars are injudicious enough to permit themselves to weigh. 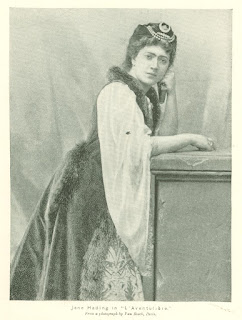 Of her acting it would be quite possible to write nothing but agreeable phrases, but to do so would hardly enable the reader to evaluate her position among her contemporaries. She can play quite well, for in­stance, a part in which Mme. Bernhardt has failed - that is, in the opinion of the author of the play and of the Paris critics. Yet, to be perfectly frank, Mme. Hading does not advantageously compare with her older compeers. The real rivals for the position of prcmiere artiste dramatique de nos jours are Duse and Bernhardt. Had­ing is merely among the prominent second­ary stars, and her best work is when she depicts the French gentlewoman of private life, the young lady who at the instigation of her parents has made a marriage de con­venance, and, overtaken by the tender pas­sion too late, successfully combats its dangerous workings.

One of her most interesting assumptions is that of Clorinde in Augier's "Aventuriere." The part is an odd one. Clor­inde is the sister of a rascally brother, and pretends to be a highly born dame who has been in grief and trouble, and to fall in love with a rich. and richly sympathetic, old nobleman. The marriage is stopped by the old gentleman's son, who returns from foreign lands in the nick of time, and Clorinde, falling genuinely in love, for the first time in her life, with the son, Fabrice, retires in a reformatory frame of mind to a convent. 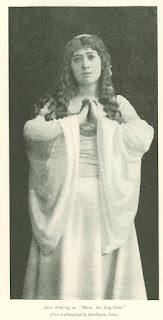 The difficulties of such a role are evident. Clorilnde is used to low life, but must be perfect enough in her presentation of a grande dame almost to deceive the entire entourage of the old nobleman's house­hold; yet the audience must be enabled to trace the real woman who is pretending.  This severely difficult feat Hading accom­plishes with easy success. Mme. Plessy, who originated the character, never de­ceived the eye. Mme. Bernhardt, all through her performance, sounded a note that was stridently cocottish, and entirely defeated Augier's scheme of construction. It led to her demission at the Francais.

To sum up, Hading is a very agreeable actress and a very beautiful woman, but her superiority to some American players is not distinctly apparent to the present writer. If the possibility of true greatness is denied her, she will never be without great charm - which in these days is much.