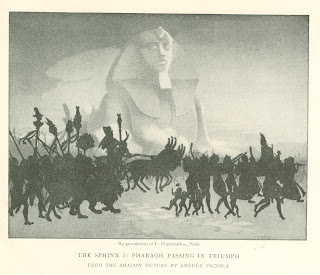 A clever woman, recently desiring to express her acute disgust at the in­consistencies of our latter-day civiliza­tion, spoke contemptuously of "this so called twentieth century of ours." And per­haps we are justi­fied in the infer­ence that she did not think that this century was very much better than any other century. Now, we must admit that the world did not turn over a new leaf with the end of the year 1900 and that the seasons still fol­low each other with monotonous regu­larity. Yet there are improvements here and there to be noted by the observant; and the more observant we are, the more likely are we to discover that many of the things we proudly vaunt as new are closely akin to other things familiar to our fore­bears. In fact, it is one of the character­istics of this so-called twentieth century to seize on an old device and to utilize it afresh in a most unexpected manner.
What is so up-to-date, for example, as the cinematograph or kinetoscope which projects our moving pictures? And what is so out of date as that discarded toy the zoetrope? And yet the scientific princi­ple underlying the biograph is the identical one upon which the zoetrope was also based.
We have all seen performers cast the shadows of their hands upon an illumi­nated screen to imitate the heads of men and of beasts. And on rainy evenings in country houses some of us have moved in front of a lamp and thrown our own pro­files upon a suspended sheet. This latter device was ingeniously employed by Mr. Barrie with humorous effect in the final act of the "Professor's Love-Story," when one of the characters sees the black pro­files of other characters projected sharply on the drawn shade of the window before which he stands. 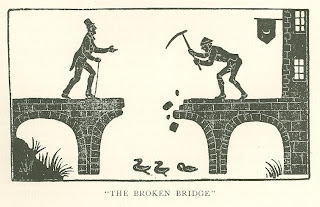 And in the toy shops the parents of in­genious children can find a box containing directions and materials. for a more elabo­rate exhibition of shadow pantomimes, whereby little plays can be performed by cardboard figures set before a lamp and behind translucent paper. Nothing could be simpler or seemingly more juvenile, and yet in the years that immediately preceded this so-called nineteenth century of ours, this childish toy was taken over and im­proved by a group of progressive French artists, who raised it almost to the level of a fine art. In France the primitive entertainment was entitled Chinese shad­ows, ombres chinoises; and it was Caran d'Ache who transformed them into French shadows, ombres francaises.
In France these "Chinese shadows" have been popular for now more than a hun­dred years, since it was in the eighteenth century that the performer who took the name of Seraphin established his little theater and won the favor of the younger members of the royal family by his pre­sentation of the alluring spectacle, the rudimentary little piece, still popular with children and still known by its original title, "The Broken Bridge."
It may not be fanciful to infer that the immediate suggestion for this spectacle was derived from the contemporary vogue of the silhouette itself, this portrait in flat black taking the name from a Frenchman who was minister of finance in 1759. At all events, it was in 1770 that Seraphin began to amuse the children of Paris, and it was more than a century thereafter that Lemercier de Neuville elaborated his ingeniously articulated pupazzi noirs. It was a little later still that Caran d'Ache delighted the more sophisticated children of a larger growth who were wont to as­semble at the Chat Noir with the striking series of military silhouettes resuscitating the mighty Napoleonic epic. And it was at the Chat Noir again that Riviere re­vealed the further possibilities latent in shadow pantomime and to be developed by the aid of colored backgrounds supplied by a magic lantern. Restricted as the sphere of the shadow pantomime may seem to be, the native artistic impulse of the French has been rarely better disclosed than by their surprising elaboration of a form of amusement seemingly fitted only to charm the infant mind into an entertainment sat­isfactory to the richly developed esthetic sense of mature Parisian playgoers. Just as the rustic revels of remote villagers con­tained the germ out of which the Greeks were able to develop their austere and ele­vating tragedy, and just as the modern drama was evolved in the course of centuries out of the medieval mysteries, one source of which we may discover in the infant Christ in the cradle still displayed at Christmas-tide in Christian churches throughout the world, so the simple Chi­nese shadows of Seraphin supplied the root on which Parisian artists were able to graft their ingenious improvements.
The little spectacle proffered originally by Seraphin was frankly infantile in its appeal, and "The Broken Bridge" is as plainly adjusted to the simple likings of the child as is the lamentable tragedy of Punch and Judy or the puppet show in which Polichinelle exhibits his hump and his terpsichorean agility. The two arms of the broken bridge arch over a little stream, but fail to meet in the center. A flock of ducks crosses leisurely from one bank to the other. A laborer appears on the right hand fragment of the bridge and begins to swing his pick to loosen stones at the end, and these fragments are then seen to fall into the water. The figure of the workman is articulated - or at least one arm is - on a separate piece and moves on a pivot, so that a hidden string can raise the pick and let it fall. The laborer sings at his work, and in France he indulges in the traditional lyric about the Bridge of Avignon, where everybody dances in a cir­cle. Then a traveler appears on the left­ hand end of the bridge. He hails the la­borer, who is hard of hearing, but who finally asks him what he wants. The trav­eler explains that he wishes to cross, and asks how he can do this. The laborer keeps on picking away, and sings that "the ducks and the geese they all swim over." The irritated traveler then asks how far it is across, and the laborer again sings, this time to the effect that "when you're in the middle you're half-way over." Then the traveler inquires how deep the stream may be, and he gets the exasperating response, still sung, that if he will only throw in a stone, he'll soon find the bot­tom. This dialogue bears an obvious re­semblance to that traditionally associated with the tune of the "Arkansaw Trav­eler." 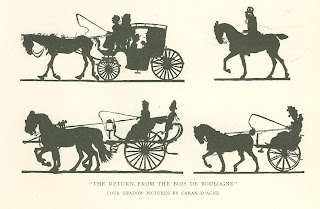 Then a boatman appears, rowing his lit­tle skiff, his backbone pivoted so that his body can move to and fro. The traveler makes a bargain with him, and is taken across after many misadventures, one of them with a crocodile, which opens its jaws and threatens to engulf the boat, this amphibious beast having been a recent ad­dition to the original playlet, and proba­bly borrowed from the green monster not long ago added to the group of Punch­ and Judy figures. The exciting conclu­sion of this entrancing spectacle displays a most moral application of the principle of poetic justice. The ill-natured laborer advances too far out on his edge of the broken bridge and detaches a large frag­ment. As this tumbles into the water, he loses his footing and falls forward himself, only to be instantly devoured by the croco­dile, which disappears with his unexpected prey, whereupon the placid ducks and geese again swim over, and the curtain falls.
There are a score of other little plays like "The Broken Bridge" adroitly ad­justed to the caliber of the juvenile mind. In an English collection may be found a piece representing a succession of appalling episodes supposed to take place in a haunted house; and in a French manual for the use of youthful amateurs may be discovered a rudimentary version of Moli­ere's "Imaginary Invalid" to be performed by silhouettes with articulated limbs. Here again we perceive the inaccuracy of the term "shadow pantomime," since most of the figures are not articulated, and, being motionless, are deprived of the freedom of gesture which is the essen­tial element of true pantomime. More­over, they are all made to take part in various dialogues, and this again is a nega­tion of the fundamental principle of pan­tomime, which ought to be wordless. Here the French term "Chinese shadows" is more exact and less limiting than the English "shadow pantomime." It is per­haps a pity that the old fashioned term "gallanty-show" has not won a wider ac­ceptance in English.


The little pieces due to Seraphin and his humble followers in France and Eng­land, devised to amuse children only, were simple enough in plot, and yet they were sufficient to suggest to admirers of this unpretending form of theatrical art plays of a more imposing proportion. M. Paul Eudel, the art critic, has published an am­ply illustrated volume in which he col­lected the fairy pieces and the more spectacular melodramas composed by his grandfather in the first quarter of the nineteenth century, in the dark days that preceded Waterloo. And in the third quarter of the nineteenth century, in the dark days that preceded Sedan, M. Le­mercier de Neuville, relinquishing for a while the Punch-and-Judy puppets which he called pupazzi and which he had ex­hibited in a succession of gentle caricatures of Parisian personalities with a mildly Aristophanic flavor of contemporary sa­tire, turned to the familiar Chinese shad­ows of his childhood and devised what he called his pupazzi noirs, animated shad­ows. He has issued also a collection of these little pieces with a full explanation of the method of performance, and with half a hundred illustrations, revealing all the secrets of manoeuvering the little fig­ures. Indeed, Lemercier de Neuville's manual is the most ample which has yet appeared; and it is the most interesting in that he was at once his own playwright, his own designer of figures, and his own performer.
As the grandfather of M. Eudel had been more ambitious than Seraphin, so Lemercier de Neuville was more ambi­tious than the elder Eudel. And yet his procedure was precisely that of his prede­cessors, and he did not in any way modify the principles of the art. All he did was to elaborate the performance by the use of more scenery, of more spectacular ef­fects, and of more numerous characters. He introduced a company of Spanish dancers, for example; and he did not hesitate to throw on his screen the sable and ser­rated profile of a long line of ballet-dan­cers.. He followed Eudel in arranging a procession of animals, rivaling a circus­ parade, many of them being articulated so that they could make the appropriate movements of their jaws and their paws. And he paid special attention to his sil­houette caricatures of contemporary celeb­rities, Zola for one and Sarah Bernhardt for another.