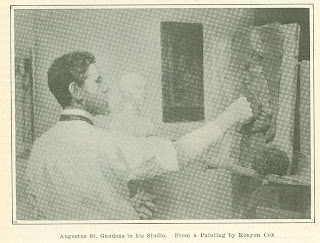 The words  "relative values" have a specific meaning not widely understood outside of the artist's world, but they also have a general mean­ing that the public might be expected to apply to such an incident as the removal of a couple of trees from the vicinity of the Sherman monument by Augustus St. Gaudens, unveiled on Memorial Day at the Plaza entrance to Central Park. Someone once recalled to a young man desirous of hurrying his education un­duly that when nature wished to make a cabbage she took a few months; when she wished to make an oak she needed a hundred years. The relative value of the trees sacrificed to the statue is about that of the cabbage to the oak in this case. In two thousand years the world has had myriads of noble trees and how many truly great equestrian statues? In our periodic returnings to nature let us not forget that sentimentality is not ap­preciative; that "nature is great and her science marvelous; but it is man who knows it." The tree represents a type form evolved to a comparatively stable perfection long ago, while the statue rep­resents in the highest way the possibili­ties of the development forever of that creative ability having at its basis the very same faculty of appreciation that prompts those who cry out at the destruc­tion of the trees. Art taught us our love of trees. That we should immoderately worship them is to be deprecated when it interferes with the perfect enjoyment of such a momentous happening as the completion and erection of this work of the greatest sculptor whom we can call American.
Augustus St. Gaudens must rank, of course, with the French school, in that arbitrary division of workers according to their conformity to this or that tradi­tion. Yet this is an age and land of quick and strong influences, and in spite of French inheritance and training, the sculptor who has produced the "Sher­man," the "Shaw Memorial" in Boston, and the "Lincoln" in Chicago, has as­similated so much that is distinctively American that more than any native-born worker he has expressed' for us the true color of our national mind.
Though born in Dublin, of French-Irish parentage, St. Gaudens was brought here when only three months old. As a New York City boy, leaving school at thirteen to work daily for a cameo cutter, while studying drawing in Cooper Institute at night, he lived until nearly twenty. Then six years in Paris under Touffroy, and in Rome with Mercie and other young French artists, taught him the mechanics of his art and gave him the modern sculptor's share in the beauty of the past. Among his earliest pro­ductions was the "Hia­watha," done in Rome and bought by Governor Morgan, who became one of his patrons. Return­ing to America, St. Gau­dens showed the. closeness of touch with his time always characteristic of the truly great artist by a keen understanding of the business side of art today. He made many friends and impressed upon them the worthiness of his talent, yet nothing ever induced him to hurry through with his numerous commissions, and his greatest works have been years under his hands. 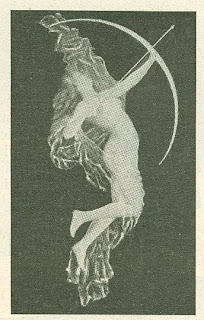 He was again in Paris in 1878, and he finished there the noble "Farragut" in Madison Square, with its beautiful pedes­tal, and the statue of Governor Randall for Sailors' Snug Harbor. From the time of the Exposition of 1880 in Paris, when he served on the Fine Arts Com­mittee, until 1897, St. Gaudens worked under New York influences, and as in­structor of the modeling classes of the Art Students' League, shared his knowl­edge with the younger men who are now giving us hopes of a strong school of decorative sculpture. His "Puritan" for Springfield; his reliefs of Dr. Mc­Cosh for Princeton, and of Dr. Bellows for the Unitarian Church of All Souls, New York; the Garfield monument in Philadelphia; the "Logan" for Chicago, and the magnificent "Lincoln" for the same city, as well as the incomparable "Shaw Memorial," and many minor busts and reliefs, were done in this time. He went again to Paris in 1897, and the great "Sherman" was there com­pleted and shown in plaster at the Ex­position of 1900. Of the most importance among the commissions still un­executed are the two groups that are to stand before the Boston Public Library, representing "Law" with "Power" and "Religion," and "La­bor" with "Science" and "Art "- the kind of per­sonifications that are so wearisome when con­ceived by the mediocre man, but which, produced by this man, now in his fifty-sixth year, are cer­tain to be epoch making in sculpture.


St. Gaudens is a learned and cautious artist, never has hasty or self satisfied without  many times repeated effort. Taste­ that quality supremely French, yet slow­ly coming to be American, too - is his. To speak of his excellence as a crafts­man would be to waste space. It is an age of excellent craftsmanship in the fine arts, and the man of sincerity can scarce­ly miss learning the science of his art well. One cannot say of St. Gaudens as of Rodin, that "technically he can do anything he chooses." Perhaps he can, but he lives very closely within the sculptor's traditions of what is fit for sculptural representation. In what he has done he is satisfyingly competent in all the more purely surface requirements as well as in management of masses, and of interestingly contrasted contours of broadly handled surfaces, as in his horses, with quite detailed treatment of textures and draperies, as in the figures of  "Sherman" and the "Victory." As with most moderns, his technic in marble is not essentially distinct from his bronze working method. But his bronzes have less suggestion of the clay modeled origin than is usual. He has as much of quality as any French sculptor pro­ducing similar works, and much more of expression; and more than this, he has gone beyond all the Frenchmen of his school in spontaneity and freedom from the too hampering effects of style as understood by the French Insti­tute sculptors.
In the larger works, with all the power of rising to grandeur enough for his subjects, St. Gaudens yet keeps the charm that is often the one lack in sculpture of the grand style. His people are human and lovable through both their nobility and their American approachable­ness. Even the figure in Rock Creek Cemetery, Washington, called some­times "Grief," has so little of the repellant quality of sorrow as to be also some­times called "The Peace of God." His few female figures are all womanly and of a type spare in figure in contrast to the pseudo classic. With them, as with his heroes, one feels the touch of an austerity of temperament not found in contemporary French art. It harks back to Italy of the Earlier Renaissance - or is it American of the nineteenth century? That the "Diana" of the Madison Square Tower is his only nude is often deplored. But what is there in the modern Amer­ican civilization that admits of repre­sentation in the nude at all measureable in importance as a subject with such na­tional themes as St. Gaudens's various Civil War memorials have presented? All his figures show mastery of the nude. He has not caviled at our clothes or our prejudices. He has been of us, and he even indulgently resigned himself to bear the silliness of those who could not appreciate his first design for the Columbian medal. He would wish us other­wise than we are in matters artistic, but he knows we can't be made so in a day, and he meets us on ground where we can be at home and gives us splen­did things we can like in spite of our little knowledge.
In his delicate low-reliefs, St. Gaudens's quality of charm comes most into promi­nence, and here he has a certain won­derful power of choice and a rare definiteness of mass handled in that most difficult of arts depending upon certain illu­sions not definable at all. His low­-reliefs of the Butler and Schiff chil­dren, of Miss Violet Sargent, and, above all, those of Bastien-Lepage and Robert Louis Stevenson, are rivaled only by those portraits by David d'Angers in modern art. In them there is utmost refinement of simply ar­ranged detail.
In all his works St. Gaudens attains largeness, not by elimination of the non-essential only, but by. personal absorption in and possession by his subject, and the total ab­sence of that French cleverness that cannot help making a play for attention. He has the delicacy in ex­pression of Prax­iteles, and a comparison of the "Sherman" with Fremiet's "Louis d'Orleans" and "Torch-Bearer"­ the only rivals it has in late art - will show how su­perior in signifi­cance the new group is.
Because of the mind, large enough to be satisfied and hopeful with the contemporary, be­hind the trained hand, that could give us our beloved ungainly Lincoln as the true hero of the democracy, St. Gaudens rep­resents sculpture at its height today for us Americans.
Originally published in the Independent Magazine.  June 16,1903.