Sanford B. Dole - President of Hawaii 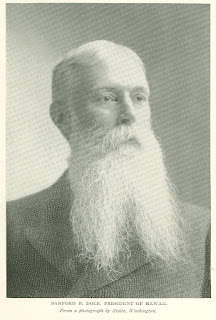 Rulers sometimes meet as host and guest, but it is seldom that the official head of a government goes abroad upon a business errand. President Dole's visit to the United States is an incident of a sort that is rare in diplomatic annals, and one that shows the supreme impor­tance to Hawaii of the mission on which he came. Still more unique is the fact that what is understood to be his purpose is to terminate the existence of his own government, and surrender the independ­ence of his diminutive country. If he succeeds, he will go down in history as the first and last President of Hawaii. 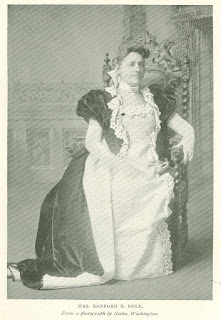 But if his rule in the Pacific island group should be ended thus, Mr. Dole might find before him the ampler possi­bilities of a career in American politics. Whatever form of representation Hawaii might have at Washington, he would very probably be chosen for the post. He would be a striking and interesting figure at the Capitol. He is fully six feet tall, with a silvery beard which is more patri­archal and impressive than that of Senator Peffer. His features are of strong but kindly mold, his utterances direct, digni­fied, and courteous.


Mr. Dole's father was a New Bedford man, who went to Hawaii as a missionary in 1840. The son was born in the islands, but was educated at a Massachusetts college, and admitted to the bar of the Bay State. Going back to Honolulu, he was appointed judge of the Hawaiian supreme court by the late King Kala­kaua, and this position he held up to the time of the revolution of five years ago. He was not one of the active promoters of that much discussed upheaval, and his selection as president - which was brought about by proclamation, without any form of election - was due to the fact that he was recognized as a "safe man" - a man of character and known ability, not an extremist, but one who commanded the respect of all parties.
Mr. Dole was married twenty five years ago to Miss Annie P. Cate, of Castine, Maine. Mrs. Dole's social duties in Hawaii are similar - though of course upon a smaller scale - to those of our own "first lady." She is also actively inter­ested in educational and philanthropic work.
Originally published in Munsey's Magazine.  April of 1898.
----------------------------------------------------------------------------------------------------