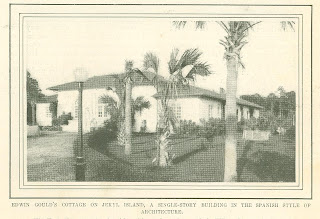 In his search for a secluded spot wherein to rest his tired nerves and to escape from the strenuous American life, the modern millionaire travels the world over. But the cable and the tele­graph wire have made the playgrounds of Europe mere suburbs of New York. Aix-les-Bains and Homburg, Carlsbad and the Alpine villages, once havens of health, arc now bustling with business and social distractions. The American resorts, from Bar Harbor in the north down through the checkered list of Newport, Saratoga, Lakewood, Atlantic City, Old Point Comfort, St. Augus­tine, and Palm Beach in the south have developed the same nervous atmos­phere. No wonder the overwrought captain of industry is willing to give a fortune for a single night's peace and quiet.
There is just one spot in the United States that affords the seclusion from public gaze, the surcease from business, the freedom from social demands, and the complete relaxation from nervous tension that the millionaire seeks, in combination with the perfection of physical comfort that he cannot do without. One hundred leading Amer­ican capitalists have taken possession of it, and have founded there a club, the richest, the most exclusive, the most inaccessible of all - a veritable re­treat for all multimillionaires.
JEKYL ISLAND, GEORGIA
All along the Atlantic coast, from Cape Hatteras to Key West, there is a fringe of islands, long and narrow, originally mere sand-bars piled up by the sea, but now covered with tall pine forests and the rich vegetation of the South. Some of them are uninhabited; some are the haunts of fishermen and petty smugglers; some are highly culti­vated, and produce the fine Sea Island cotton; some form petty sovereignties, like Cumberland Island, the home of the Carnegie family; but one stands out unique - Jekyl Island, the winter resort of the country's financial kings. It is a strip of land fifteen miles long and scarcely one mile wide. On one side the rollers from the broadest stretch of the Atlantic wash its low, sandy beach; from the other side there is an outlook across lagoons, inlets, creeks, and miles of semi-tropical swamp to the mainland. The nearest town is Brunswick, Georgia, ten miles away. 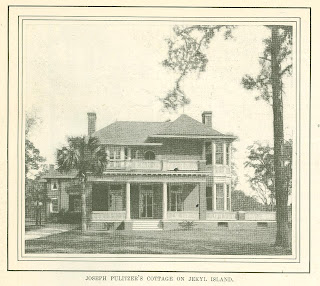 The island is the property of the Jekyl Island Club, which is nominally a sporting association. The constitution of the club says: "Its purpose shall be to own and maintain a hunting, fishing, yachting, and general sporting resort, and to promote social intercourse among its members and their families." Its State charter gives the club the right to maintain ~ a race­course, to erect hotels, to build and operate railways, to install a telegraph and telephone system of its own, and to do all manner of things that business men might covet in Wall Street. But in reality scarcely one of these charter rights is exercised. The deer jump across the most frequented roads fear­less of a hunter's gun. The game­keeper's preserves furnish such quanti­ties of birds that shooting them is too easy for sport. The hard, white sand beach is the only race track. Some strap rails laid along the dock for the baggage truck form the only tramway. The world of industry and commerce, of railroads and factories, of trusts, mergers, and monopolies, is something wholly apart from this island paradise.
FROM FROZEN NORTH TO SUNNY SOUTH
When the snow lies deep in northern cities, the Florida Limited leaves New York on its daily run to the land of sunshine and warmth. Just before it reaches the Florida line, a stop is made at a little wayside station in Georgia. The passengers see the name on the wooden station - Jesup. A luxurious private car is detached, and at the end of a humble local train it disappears into the swamps. That car is conveying a weary millionaire to Jekyl Island. It jolts along through the forest for an hour, and finally stops at Brunswick, a dry spot in a great region of coast swamps.
The millionaire steps from his car, twenty-four hours away from New York: A sailor in smart yachting uni­form salutes him. Servants attend to his luggage. He steps aboard a trim little steamer, and it darts away to­ward the island, whose tree-tops can be dimly seen out seaward, across the miles of intervening marshes. He has left the strenuous world behind him. He is going to get his sleep and rest. He can find it at Jekyl, in the comfort­able hut not luxurious club house; or perhaps he owns one of the cottages that lie scattered about the island. He hears nothing from the outer world; he scarcely more than glances at the newspapers. There is a telegraph cable to the mainland, perhaps because some of the Gould's, who control the Western ­Union company, have a cottage here, but the operator has the lightest task of any employee in the whole system.
A WINTER PARADISE 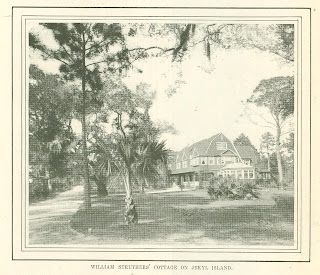