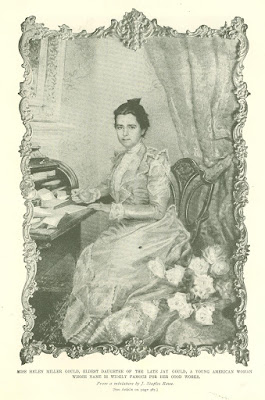 Every great event in the life of a nation is counted upon to bring forth a fresh gallery of heroes to relieve the pent up enthusiasms of the people. The war in Cuba and its melancholy aftermath in camp and hospital brought, among others, Miss Helen Gould, en­tirely against her own seeking, into the lime light of publicity. As soon as the chronicle of her good deeds became known, preparations for her apotheosis were begun. The American may pride himself on his reserve, but he has almost a virginal sensitiveness to gentleness, charity, and kindness. When once, through any cause, his outward armor of repression is removed, it is not diffi­cult to touch his heart, and to touch it deeply.
Helen Gould endeared herself to the American - and perhaps all the more quickly because he had been accustomed to look for only negative virtues, at best, from the Gould name - by the splendid promptness of her giving. Doubtless there were others who gave as freely as she, and many who, proportionately to their means, gave as much; but their benefactions did not seem the same. We have a way of distinguishing between that which is given with the hand and that which is given with the heart. The giving is more likely to be appreciated than the given.
In the moil and labor of Wall Street, Jay Gould battled for millions. He raided and crushed those weaker than he, and fought doggedly with those stronger. He employed every artifice of the cruel code of finance. He re­ceived many hard knocks, more than his share, perhaps, and he took them like a man, and won; but he gave blows as hard as any that he received to many who did not win. Naturally, he left many sore heads. His methods were denounced, his name bore a burden of contumely, and honor was not attrib­uted to him.