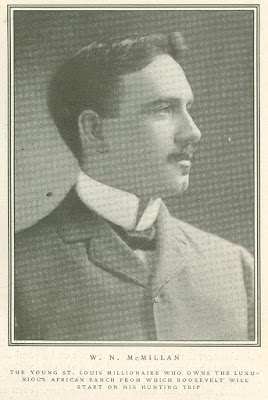 Ju-Ja Ranch, where Mr. Roosevelt will stay for several weeks discussing with Mr. McMillan the final plans for his plunge into the wilderness, is twenty-three miles from Nairobi, the seat of government in British East Africa. The ranch is a domain of twenty thousand acres, covering a tract seven miles long that ends in a sharp angle at the con­fluence of the Athi and Tana rivers. Immediately north of Ju-Ja, in majestic view from the veranda, Mount Kenia pushes its snow-cap nineteen thousand feet high across the exact line of the equator. Between the ranch and Mount Kenia lie the swells of the big game wilderness, which runs on in a northwesterly direction toward the great volcanic escarp­ment that shields Victoria Nyanza.
J u- J ah House is one story high and of great ex­tent, surrounded on all sides by a veranda. Hall­ways running across the house from every side give entrance to the rooms, which open through French windows upon the veranda. At the northwest corner, looking out upon the plains and the mountains is a kiosk where midday refreshment and afternoon tea are served. Each guest has his own Somali servant who responds to his call and attends to his needs.
Conveniences abound which might well make one forget that he is next door to the wilderness. There is a telephone service connecting the house with every part of the farm. Electric lights are furnished from a power plant operated by turbine on the river, and there are storage batteries for a resource in case the dynamo "goes dead." An artificial ice plant cools the atmosphere of the house and supplies plenty of ice for beverages. Pianos, talking machines, and the magazines are at hand. 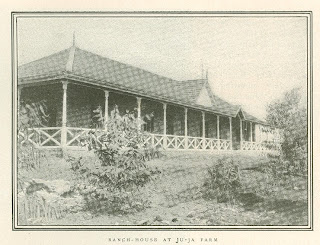 Open house hospitality is the custom of a new country. At Ju-Ja hunting parties help themselves, if they arrive in the absence of the master. The house is like a hotel on the road to the great northern game fields, and the great sportsmen of the world are pretty sure to drift in their sooner or later.
The temperature at this altitude of fifty-­four hundred feet is agreeable throughout the year. Torrential rains for six weeks in the spring leave the air damp, but at other seasons the heat is dry like that of Colorado, though not so wearing on the nerves. White men wear a pith helmet and covering for the neck as a protection against the sun. The native carriers go bare-headed and smear their skin with a preparation of red earth and castor oil.
The gardens at Ju-J a are wonderful. Acres of them cover the hillsides that drop away to the river boundaries of the farm. Flowers that in this country blossom at different seasons bloom all together in the violet sunshine. The pansy, a spring flower in temperate climes, grows beside the fall chrysanthemum. Peas, potatoes, lettuce, and beets mature week after week the whole year round, according to the time of planting.
The government is deeply interested in McMillan's experiments in the domestication of native animals. No other individual is so well equipped to attempt the work on a scale that will yield immediate results. When he first bought Ju-Ja, McMillan intended to raise ostriches, but the colonial government has since then prohibited the capture of the ostrich for breeding. The result of this restriction, which is severely criticized by the settlers, is that the birds lay their eggs anywhere on the open veldt, where they are eagerly sought by other game. This is the reason given by the settlers for the failure of the ostrich to multiply, as against the claim of the colonial office that confine­ment threatens them with extinction. The birds run wild, but when rounded up, driven into the corral, fed, and then liberated, they return for food and become easily domesti­cated.
McMillan's most important experiment in breeding is the removal of the hump from the native cattle by interbreeding them with Durham bulls imported from England. The second generation of calves show a perceptibly decreased hump, besides a noticeable improvement in the quality of the meat, which of course is the objective point. The meat of the native beeves is stringy and too tough for eating and for shipment to the Indian and other South African ports. But "McMillan's experiment" is very annoying to British epicures, who value the fatty hump as a delicacy for the table. Pigs are being imported by this enterpris­ing American, and the breeding of swine under the equator has a very promising outlook. The mule is another factor in breeding, since its importation from the United States during the Boer War. McMillan's success with the mule is making an industry. The whites in the Nairobi district keep a great many fine horses; but horses are restricted to the high lands, away from the river bottoms, where the sting of the tsetse fly is fatal. 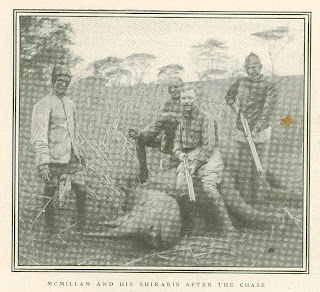 McMillan does very little hunting now, and that only when organizing hunting parties for the entertainment of his guests, as he is now doing for Mr. Roosevelt. Mrs. McMillan, who also has killed her lion, comes with Mr. McMillan from India, to spend two months at the farm, including the period of Mr. Roosevelt's visit. His coming has been talked about for the past year at Nairobi, indicating the length of the correspondence between him and Mr. McMillan before the hunting plan was made public.
McMillan will meet the Roosevelt party at Mombasa and ride two hundred miles up the Uganda Railway to Muchakos, where the ex­-President will leave the railway and travel twenty miles to pay a fortnight's visit to Sir Alfred Pease, an old friend who has hunted with him in America. Lieutenant Colonel James Hayes Sadler, Governor of British East Africa, and Lieutenant Governor Jackson, who is in charge of the Hunting Department, will meet Mr. Roosevelt at the Pease Farm. There Mr. Roosevelt will be formally notified that the government confers upon him an unlimited privilege to shoot within its African jurisdiction. Mr. Roosevelt will then move to Ju-Ja Farm.
For a distance of one mile on either side the tracks along the line of the railway all game is protected. Winston Churchill, who was in British East Africa last spring, rode on the pilot of the engine to observe the game. The rail­way leads through a zoological paradise. Churchill saw six lions from the train. Mr. Prynne, from whom the facts used in this article were obtained, saw four on the same journey. A male and female, pacing side by side, were not three hundred yards from the passengers. The pair merely turned their heads to look at the train. At another point in the panorama he saw a female lion stretching like a cat on the red veldt near the train, and again a male on its haunches in bold relief on an ant-hill. Bands of antelope of all species, the kongoni, water buck, reed buck, wildebeeste, hartebeeste, impala, orax, and countless others, together with thousands of zebras passed in review. Ostriches and hyenas were common sights from the car window.
All these animals seem to know that they are immune from danger in this protected belt. Outside this narrow zone animal traits have changed with the ap­pearance of the white man. Some of the more timid have retreated entirely. The bolder game give little heed to the natives, who they know have no guns, but they flee before a white man on foot or mounted. A buckboard is not avoided as long as it is moving. They have learned that the gun cannot be aimed with accuracy from a jolting vehicle on an African road. The instant the buckboard stops, however, every beast within range will scamper for cover. If the hunter can drop from the rear of the moving buck­board, he may get a quick shot. 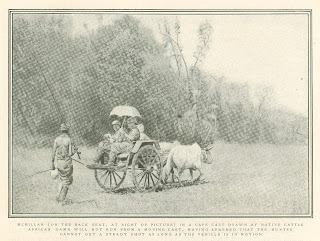