By Alice B. Carroll.

Mrs. Reginald De Koven, who came into notice by the pub­lication of "A Sawdust Doll," is an interesting type of the modern society woman as she becomes possible through culture, wealth, refined environment, and, beyond all else, through that cer­tain restless introspective qual­ity characteristic of these latter days, which forces womankind, even the most listless, to seek emancipa­tion and individual expression of some kind.
Although Mrs. De Koven had established an en­viable reputation as a literary and dramatic critic in the leading New York and Chicago dailies, and had won the respect of every true lov­er of literature by her brilliant translation of Pierre Loti's" Pe­cheur d'Islond," her first venture as a novelist was made, a little over a year ago, in "A Sawdust Doll."
It was widely announced as a society novel dealing with the doings of the Four Hundred, and the author was also duly announced to be one of this select circle. As a matter of fact, Mrs. De Koven is from Chicago, a Western woman, the brilliant daughter of a brilliant self made man, and inherits those qualities.
The book, therefore, gives the im­pressions of a keen "onlooker" of the conservative set rather than an emancipated select one. It had an enor­mous circulation, running through four editions within a short time. It was widely read, criti­cized, condemned, and praised. Men pronounced it dull and morbid; women cried over it and advised their friends to read it. It is, on the whole, a clever book, pessimistic and introspective in quality, and, for that reason, more apt to appeal to women than men. The style is direct, many of the situations picturesque, and, beyond all else, the book is tinged with the subtle charm and weakness of a woman's novel in which the person­ality of the writer predominates to the extent almost of a journal in­ time. "A Saw­dust Doll" de­servedly lifted Mrs. De Koven from the rank of a clever newspaper writer and made her one of that little coterie which until then had counted only Mrs. Cruger ("Julian Gordon") and Mrs. Burton Har­rison. These three women - wealthy, young, and attractive - have voluntari­ly chosen a life of intellectual labor, and have set an example of serious, digni­fied work in a world given over to friv­olity and aimlessness. 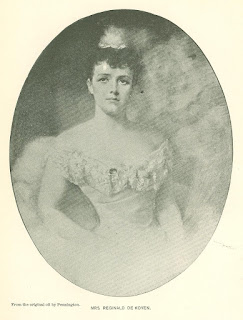 Anna Farwell De Koven is one of the three daughters of ex-Senator and Congressman Farwell, a Chicago millionaire, who for twenty-five years was one of the leaders in Illinois politics. Her mother was a woman of culture and refinement, who devoted herself to the education of her clever young daughters. Mrs. De Koven, without doubt, de­scribes herself when in "A Sawdust Doll" she says of Helen: "From her father she had inherited a pliable and vigorous intelligence, and a tempera­ment whose influence upon others was electric. From her mother she had in­herited an ineradicable Puritanism." Further on Mrs. De Koven writes: "She (Helen) had been carefully taught by a succession of governesses whose ministrations were succeeded by private instructors of the neighboring academy. Her clear and vigorous mind responded with enthusiasm to the intellectual training she received."
The Farwell homestead was in the immediate neighborhood of Lakeside University. From her childhood, there­fore, Anna Farwell felt the influence of its high standard, and no sooner had she reached an age of judgment than she entered the college as a student. She was counted among the most brilliant of its students; she took a full Greek and Latin course, and was finally selected at the commencement exercises to be the valedictorian of her class.
Young, charming, and clever, she made something of a sensation during her first season in Washington, where her father's official position gave her an entree into the brilliant social coterie that distinguished the administration of Arthur.
A short time afterward Miss Farwell went abroad, and, with the instinct of the born writer, gave her impressions in a series of letters sufficiently clever to be readily accepted by the dailies of Chicago. After this her name became identified with a number of sketches, storiettes, and poems, all showing ability above the ordinary. The charming poem, "Dancing in the Barn," called forth a personal letter of congratula­tion from Eugene Field. Miss Farwell made rapid strides in her literary ca­reer, and accepted and filled with credit the position of literary editor on the Chicago Evening Post.
Her marriage to Reginald de Koven, the composer, brought her to New York, where she soon claimed a place in the best artistic and social circles of the city. Her beautiful home in Irving Place is one of the few rendezvous where the best elements of artistic bohemianism and social conservatism meet and enjoy free intercourse and exchange of opinion.
In spite of the many new demands made upon her, Mrs. De Koven con­tinued to occupy herself actively with literary matters. She wrote literary and dramatic criticism for a leading New York daily; her short stories, which dealt in a piquant way of fash­ionable life, found ready acceptance in our best magazines; and she made a distinct impression, as a translator of high order, upon the publication of "The Fisherman of Iceland." The preface of the book, written by Mrs. De Koven, is conceded to be a model of English style.
Prior to her recent trip abroad, Mrs. De Koven placed "A Comic Mask," her second novel, in. the hands of her pub­lishers. Of this new book she Rays: "I know that is a better book than my last. It is written with more knowl­edge, and I know I had a better mes­sage to give."
In describing her appearance and personality, one can do no better than to quote her own description of Helen Rivington: "Her face was small and pale, her features firmly cut and deli­cate. The expression of her mouth in repose was sad even to sternness, but her eyes rarely lost their mysterious look of vague abstraction."
Originally published in Metropolitan Magazine.  August 1898.
----------------------------------------------------------------------------------------------------