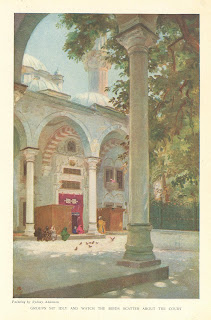 When you have gone as far as the steamboat will take you, up the Golden Horn, beyond the farthest walls of ancient Byzantium, you set foot on the sacred soil of Eyoub Sultan. For the last mile or more, over the steamer's bow, the Mosque of Eyoub, a simple dome between two graceful minarets, has appeared rising amid a group of cypress-trees against a hill. Little domes seem to have drawn close to the parent mosque. They cover the tombs of illustrious dead. Closely gath­ered streets of red-roofed, faded wooden houses press in close protection about the mosque's silent groves: Through these groves run out narrow, stone - paved streets between stone walls. Within the old wrought-iron grilles that guard open­ings in these walls one sees groups of carved marble tombs. At intervals domed sepulchers mark the resting place of saints. So in Eyoub one reaches the mosque. past the wooden abodes of the living, through the cold stone streets of the dead.
From the village street two gateways give admission through high surrounding walls to the outer court. There thou­sands of pigeons live in the shadow of an enormous plane-tree that spreads its wide, protecting arms to shade the sacred court. Almost five hundred years have passed since the Sultan Mohammed II. set in the ground the sapling that has become an arboreal giant whose trunk is the girth of a group of thirty men. All day the doves coo their happiness to Allah for the peace of the great court, the protection of their tree of paradise, and for their guardian angel, always dozing below in the person of an old be-turbaned Turk. He receives money from the faithful (a holy act), then scat­ters their beneficence in golden grain for the happy birds to flutter over on the sun-flecked court. 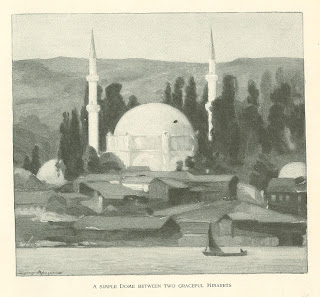 Under the great plane-tree men, too, find peace at Eyoub. Groups sit idly and watch the birds scatter about the court, or look up through cascades of leaves. Through a gateway one may look into the sacred inner court. In its center a rectangular grille, done in green and gold with a marble fountain at each corner, encloses an oasis of verdure shaded by venerable trees. The only other entrance to the mosque faces one across the court, and is approached through the stone streets that pass among the tombs. To the right a red curtain hangs within the carved marble portal of the mosque. Facing this on the left, let into a wall brilliant with ancient tiles in blue, is a beautiful gilded grille. Its center is fretwork in brass cut in Arabic char­acters, and in the middle is a small open­ing through which worshipers may peer. Rich silken curtains hang inside, that may be drawn should evil eyes seek to penetrate its mystery. Within is the most sacred spot in the Turkish Empire, as the mosque and its groves are the most revered. One day I tried to look inside. A dervish came quickly to the grille and blocked the view, the curtains were drawn, and a veiled woman who was in the court came forward and said im­pressively, "Yasak," which means "It is forbidden." Yet I often hovered within the sacred court, as near to the grille as I dared, and for a whole month from its farther side, as my picture grew, I watched the outward expressions of the mystery.
It is an Oriental tale, and began in the dim ages past, when Mohammed lived and miracles happened in the sight of men. Having subdued the pagan tribes around Mecca, and desiring to carry the religion of the only true God out into the world, he sought a standard-bearer who would be chosen by Allah, and not by mortal man. A sacred dromedary was selected, and all the people of Mecca were warned that upon a certain day the prophet himself would ride this inspired beast through the streets, and no man the conqueror, took the city that once was Byzantium, then became Constantinople, and now is known to the world as Stamboul. 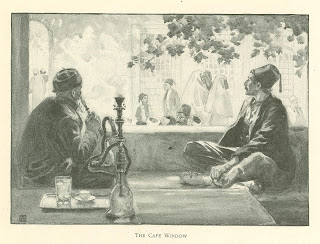 Out beyond the walls, in the pasture lands where a hill covered with stately cypress trees overlooks the Golden Horn, then descends into a sheltered valley, a shepherd tended his flock of sheep and goats. He told a tale to the soldiers of the conqueror which brought the holy men and the Sultan Mohammed himself to the spot. In the pastures where the flocks grazed, the long, dry days of rain­less summer burned the grass brown and dry all save a circle that remained always, on the hottest day, a cool, moist green. Yet the flocks avoided this grass and never ate of it. Marveling upon this, the wise men who came with the conqueror bethought them and remem­bered the death of the saintly Eyoub Ansari, and believed surely that this must be his burial - place. But before they would erect a monument to the brave Eyoub they gathered round about the circle of green and called upon Allah to give them a sign. Immediately a foot appeared above the ground! Then they worshiped Allah, and revered the memory of Eyoub, a great warrior and a holy man, who died for the Cres­cent. The conqueror caused a mausoleum to be built upon this site, and gave it in charge of the most holy dervishes, who guard it, and they only may enter it to this day. Not even the Sultan is per­mitted to enter ex­cept once only in his life, the day on which the sword of Osman makes him Commander of the Faithful.
The original mosque has passed away, and the pres­ent building of white marble, with two beautiful minarets and an inner and outer court, was erected about 1799. Ever since its foun­dation the mosque has been forbidden to Christians, and all others not of the true faith. During his visit to Constanti­nople as the guest of Sultan Abdul Ha­mid, the German em­peror used every per­suasion, but all of should interfere with it or divert it from its will. But at the house of whichever man it stopped, he was the chosen of Allah to carry the standard of Islam against the infidel. Covetous of the post, in their wiles the Arabs bought the choicest herbs, that were as the sweets of life to the camels of the desert, and hung them upon their doors that the beast might be induced to halt and feed. Heedless of these carefully planned seductions, the dromedary passed slowly on, leaving disappointed Meccans behind, till it came to the only house in the whole city that was not provided with a lure. The owner was even too poor to buy grass. Here the sacred beast halted, and the prophet descended to enter, but the man and his wife came out of the house and respectfully stood aside.
"Why do you leave your house?" asked Mohammed.
"When the Messenger of Allah enters it there is no place for me; my house is thine," said the man.
"Know, 0 man, that Allah has chosen thee to be his standard bearer. Thou shalt be the protector of the faithful in the land of the Romans."
Then the man bowed down before the prophet, and, kissing the hem of his garment, praised Allah in his name. The man's name was Eyoub Ansari. For many years he bore nobly the stand­ard of Islam. As he was growing old, one day he presented himself to Mohammed, prepared as for a journey, and with forty armed men.
"Whither goest thou?" demanded the prophet. 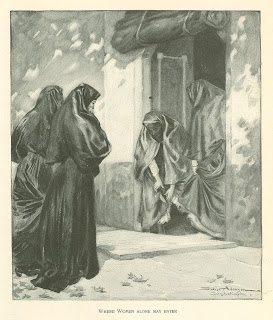 "To take the city of Constantine, for hast thou not spoken, 0 Prophet of Allah, with thine own lips, what has been re­vealed when thou saidst: 'Knowest thou a city whose two sides look upon the sea, and its third side upon the land? It will fall, not by weapons of war, but by the power of these words, "There is no God but Allah; Allah is great!'" And in the Koran is it not written, 'The greatest of princes is he who will make that conquest, and the greatest armies will be his'?" Thus spoke Eyoub.
The prophet looked at the aged war­rior and at his few followers and mar­veled at the courage of the man. Then he said: "0 Eyoub, thou wilt not suc­ceed, for surely the time has not yet come."
Eyoub replied: "So be it, 0 Prophet of God. I can but try, and the grave of a martyr is an honorable one."
"Then go," said Mohammed, "and Allah be with thee."
With what followers he could gather on the way, Eyoub arrived at last almost at the walls of the Greco-Roman city, but his advance being perceived, an army was sent out against him. Eyoub was killed, and his little band was utterly destroyed. Eyoub died a man of eighty years, and this happened in A.D. 668.
As the centuries passed, fired by the prophecy, again and again the Arabs rolled their legions against" the third side that looks upon the land," only to perish in thousands, and leave upon the hillsides an army of graves.
But the fate of men and cities was surely being worked out, even as it was written. The Turkish Empire did not yet exist. The power of the califs in the south had decayed. Independent princes of Turkish tribes fought one another for the land of Asia Minor. The Greek power in Constantinople was on the wane. Tartar invaders struck where they could. One day Ertoghrul, a Turk­ish tribal prince, set out with a following of four hundred horsemen to seek his kinsman, the Emir Alaeddin. He became Alaeddin's greatest general, and carried victorious arms into surrounding lands. This was the nucleus of the Turkish Empire that under Ertoghrul's son Osman, who succeeded Alaeddin, reached to the shores of the Black Sea. So the Turkish nation is unknown to itself as "Turkish" (that being an opprobrious term suggesting barbarian), but they know themselves as Osmanlis, and it is the sword of Osman whom they regard as the father of their country - that is girded upon each sultan at Eyoub, when the sacred rank is set upon him, just as in the rest of Europe a crown is placed upon the head of a king.
The descendants of Osman fought their way nearer. and nearer to Con­stantinople, Allah aiding them by throw­ing down the walls of cities by earth­quakes, that Turkish generals might enter without a blow. At last the prophecy was fulfilled, and Mohammed II. his power could not gain permission even to set foot in the outer court. It is said that during the Crimean War a French officer in disguise entered the baths at­tached to the mosque. He dropped dead on the spot! Later two other ad­venturous spirits entered the court in Moslem robes, and they at once fell down in a swoon, though tradition omits their ultimate fate.
But times have changed. In the re­construction after the recent revolution, the Young Turks threw down many of the sacred traditions of their race, and by their order the gates of the mosque were opened to the feet of the un­believer, much to the anger of the clergy, who watch with keen disfavor the pres­ence of the alien hat. Wearing a fez, one may pass unheeded in the court. 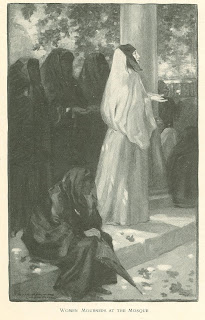