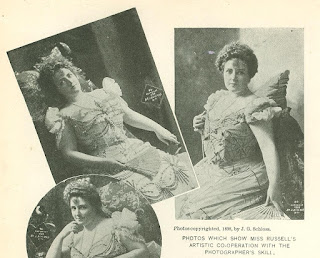 The latest reports from Berlin bring accounts of the enthusi­astic reception given to Lillian Russell, not only as a professional beauty, but as an artist who for the past fifteen years has been recognized as the best exponent of light opera in America.
That Miss Russell is a beautiful and talented woman none will deny, but if she has retained the affection of the capricious American public for so many years it is because she is also highly intellectual. She has not depended on mere beauty and talent. It is a well­ known fact among professionals that Miss Russell today studies as ear­nestly and assiduously as any pupil at the Conservatory, and for this reason each season shows further progress and flexibility of voice. 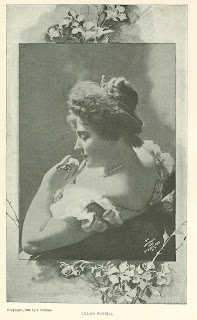 Lillian Leonard Russell is one of the three daughters of Mrs. Cynthia Leon­ard. The family came originally from a little town in the neighborhood of Steubenville, Ohio, and Lillian's first appearance as a singer was in the choir of a little Western church. When her daughter Lillian was about fifteen years old, Mrs. Leonard, whose restless spirit could not brook the prosaic life of a small country town, decided to come to New York with her three daughters.
Lillian, the beauty of the family, at once found a modest opening in the chorus of Rice's "Evangeline," then being played in Brooklyn. She could not long remain unnoticed; within a short time an offer was made to her by Tony Pastor to take the leading parts in the series of light English and American operas which he planned to tour through the country. This tour gave the young girl her first real train­ing, for in order to keep up with her repertoire she was obliged to study diligently, and had little time for the social pleasures that usually fall to the, lot of a beautiful and gifted girl. 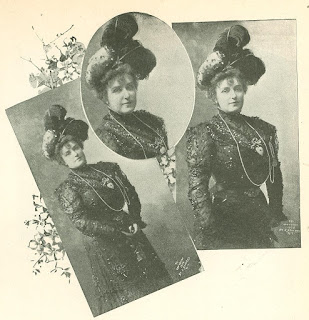