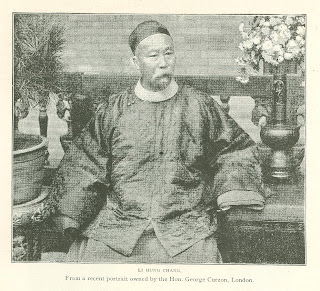 In any attempt to measure a man and de­termine his size and force, it is essen­tial that he be taken in his native surround­ings, and compared, not with alien types and times, but with his own fellows; with the facts and forces which surround him and make for or against him. Fanciful speculations as to what Alexander the Great would have accomplished had he been in the place of the first Napoleon, teach nothing and help no one. While it is not difficult to determine the comparative value of the ethical systems of Confucius and Socrates, yet, in measuring the men themselves, each must be taken in his own home, and his greatness estimated by his ability to mould thought, purpose, and life there. In much the same way, the reader of this sketch of one of the most honored and distinguished of modern Chinese should study him in his native environ­ment, and, so far as may be possible, from a Chinese point of view. It is idle to con­trast him, for example, with the great friend of his 1ater years, General Grant, or to measure the one by the other. It is extreme1y probable that General Grant would, as a Chinese, have accomplished nothing; and the great Oriental statesman who survives him wou1d have been equally a failure in America.
His Excellency, Li Hung Chang, was born in a small city in the province of An Huei, which lies in the centre of China, in 1822. His parents belonged to an ordi­nary family of the middle class. In his early days he pursued the usual course of Chinese study, and, so far as is known, gave no evidence of preeminence over his asso­ciates. He took the several provincial examinations, as other young men did, and gave the first sign of special ability when, at the final triennial examination, held at Peking, he passed with such honors as se­cured him admission to the Han Lin Col­lege, which carries with it immediate offi­cial employment and an assurance of rapid promotion. 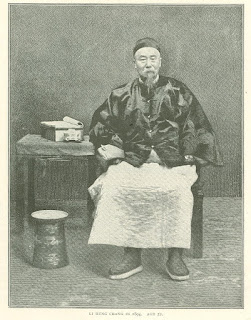 Without attempting to decide upon the justice of these charges, it should be said that Governor Li was well aware that, with the single exception of Major Gordon him­self, the foreign officers in the Ward corps were fighting, not for the sake of patriot­ism or glory, but for dollars. They were not of the best class of foreigners. They were often insubordinate, mutinous, and not a few of them had deserted to the rebels: some, indeed, having deserted, re­turned and were forgiven, only to repeat the same routine a second and even a third time. And Governor Li never forgot a fact of which Major Gordon often reminded him, that the latter was, first, last, and always, a British officer; that his sole loy­alty was due to the queen; and that, while he labored for what he considered to be the best interests of China, those interests were never allowed to hold more than a second­ary or subordinate position in his mind. He had no sympathy with the idea, "China for the Chinese," which dominated Li's thoughts and purposes; but looked at every question from the standpoint of a British subject. In other words, he would have fought for the rebels as bravely as he fought against them, had he been con­vinced that their victory would have better promoted the interest of Great Britain, which, to him, were coincident with the interests of civilization throughout the earth. It is not to be wondered at that under such circumstances Governor Li used Major Gordon, but did not give him his confidence.
Other circumstances which happened about the same time, and of which the Chinese governor was fully informed, may well have both intensified, and to a great degree justified, his reserve. A British subject employed by the Chinese gov­ernment in the customs service had been sent by it to England with funds for the purchase or construction of a number of gunboats, as a first step toward the estab­lishment of a Chinese navy. He brought back to China a fine fleet, larger and far more expensive than his instructions had called for, officered exclusively by English­men, and having a distinguished British naval officer as its admiral. The fact was developed almost at once, upon the arrival of the fleet in Chinese waters, that a pro­vision existed in the contract under which this admiral had consented to serve, that he would obey no orders given by any Chinese authority, the emperor himself not excepted, unless such orders were counter­signed by the agent who engaged him; and the agent bound himself to countersign no such orders unless in his judgment they were "reasonable." It is hardly neces­sary to add that this fleet was at once broken up, the admiral re­turned to Europe by an early steamer, and the agent who pro­posed to seat himself above the emperor found no further scope for his services in China.
The military skill shown by Li in the suppression of the Tai Ping rebellion and in crushing out the last scattered bands of the insurgents, and the energy, good sense, and administrative ability mani­fested by him in restoring order and prosperity to the devastated districts, largely increased his in­fluence at court, and made his promotion to the highest offices in the state a certainty. 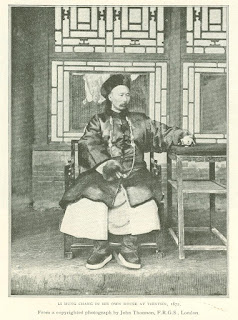 It was not, however, until the summer of 1870, that the pressure of events induced the Chinese government to summon Li to the high post which, until recently, he has continuously held, and where he has been, in the eyes of the Western world, at once the expo­nent and leader of progress in China. A fearful massacre had occurred at Tientsin in June of that year, in which the lives of twenty-three foreigners, including the French consul and his wife, had been taken, under circum­stances of peculiar atrocity, and, as was well known, with the connivance and open encouragement of the highest local authorities of the city. The viceroy of the province was Tseng Kuo Fan, one of the ablest of Chinese statesmen, and the patron, instructor, and lifelong friend of Li Hung Chang. He was broken in health because of advancing years and of continuous and exhausting service to his country. He was unequal to the task. of satisfying the demands of foreign govern­ments for punishment and reparation for the massacre and restoring order; and, at his own request and suggestion, he was transferred to a less arduous post, and his pupil, Li, was appointed viceroy of Chihli in his stead. This viceroyalty, though the least lucrative of any in the empire, is the most sought after and the most honorable of any, since the capital is located within its limits, and hence the viceroy becomes guardian of the person of His Imperial Majesty. Tientsin, distant eighty-five miles from Peking, is the seaport of the capital, though situated not upon the sea, but upon a navigable river; and here, since the massacre of 1870, has been located the residence of the viceroy.

This office, however- honorable, is still purely local, and would, by itself, have given to Li neither the scope nor oppor­tunity for the exercise of the great abilities of which he is possessed. He has held, in point of fact, four offices almost continu­ously since 1870, of which the viceroyalty is by far the least in importance. They are as follows:
Viceroy of Chihli.
Secretary to the Grand Council of State.
Superintendent of Foreign Trade for the Northern Ports.
Superintendent of Coast Defense for the Northern District.
In addition to and continuous with these he has held various other offices - such, for example, as Senior Guardian of the Heir Apparent - which, being mainly honorary, and important only as marks of imperial favor, need not be considered here.
A moment's consideration will show the enormous burden of responsibility thus placed upon the shoulders of one man under the Chinese system, where duties legislative, executive, judicial, military, and naval are commonly combined, and often confused. It will also serve to exhibit the almost limitless range of opportunity afforded for the exercise of his powers. As Secretary to the Grand Council of State, all questions of na­tional import, whether referring to the internal administration of affairs, the out­lying dependencies of' the empire, or the foreign policy of the government, came under his review, re­quired his study, and called for decision at his hands. It was Li's duty to prepare the roads for the burial of a dead emperor in 1875, and to give counsel and aid in resistance to French en­croachments in Cochin China in 1883; to attend to the transport of four sticks of timber from the sea to Peking, where they were to serve as lantern poles in the Temple of Heaven, in 1880, and in the same year to adjust the Kuldja question, which at the time threatened to bring on war between China and Russia; to receive the complaint of a vice­ consul that he had been called bad names by a naughty boy upon the street and soothe his wounded feelings, and to turn from that to the question of succession to the imperial throne.
As Superintendent of Foreign Trade for the Northern Ports, Li's opportunities and re­sponsibilities were hardly less than those barely hinted at above. All questions of commercial intercourse, of treaty interpretation, and of regulations for traffic under the treaties, came to him as a matter of course. Treaty making itself formed no inconsiderable portion of his duties, and it is probable that within the quarter of a century since his appointment to Tientsin, he has concluded more treaties than the Chinese Foreign Office at Peking; while it is practically certain that his advice has been sought, and in a large degree followed, in regard to every such convention' negotiated by the latter body.
In his position as Superintendent of Coast Defense for the northern half of the empire, Li Hung Chang found himself practically forced to play the role of cre­ator, and here he doubtless found his responsibilities and opportunities most thor­oughly in line with his tastes. Unless account be taken of a few earthworks mounted with antique guns, valuable only to a collector of relics of a past age, and of an immense number of harmless war junks, nothing existed that could be called a defense of the most vital part of the empire. Everything was to be built up from the foundation. And the only limitation to the opportunity of the Su­perintendent was his own exceedingly limited knowledge of modern military and naval systems, the total absence of trained subordinates qualified to aid and ad­vise him, and the fact that the exceedingly lib­eral allowance of funds placed within his con­trol for these purposes still was exhaustible.
Such were the duties, briefly outlined, which "the great viceroy" took upon his shoulders when, more than a quar­ter of a century ago, he obeyed the command of his imperial master, and established himself at Tientsin. The mere mention of such widely diversified and enormous labors appears sufficient to convince any person of their impracti­cability during an ordinary lifetime when undertaken by a single individual, even though every circumstance were unquali­fiedly favorable. That anything of mo­ment was accomplished implies an almost superhuman versatility of talent, a capacity for labor without rest, a power of organi­zation and an executive ability almost without limit. Compared with such a task the labors of Hercules sink into the merest child's play. 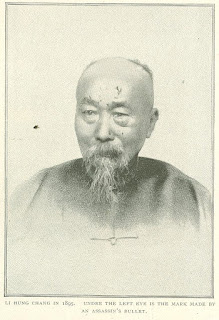