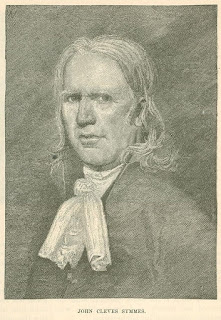 Occasional allusions to what is call­ed Symmes's theory, popularly styled Symmes's Hole, are seen in the press of this country and England. Who Symmes was, and exactly what his theory is, seem to be definitely understood by but few peo­ple. The writer is indebted to Mr. Ameri­cus Symmes, a son of John Cleves Symmes, the author of the theory, for much inter­esting information concerning the man and his hypothesis. The son is a farm­er, and resides near Louisville, Kentucky. In response to an inquiry he expressed himself at some length concerning the Howgate theory, about which he had read much in the public prints.
"Mr. Howgate's plan," he said, "is to colonize a given number of men, well equipped and provided for, in the highest attainable latitude, and to let them spend the first winter where Captain Hall did, up between 81° and 82° of north latitude, and to then go up to 83° or 84°, and spend another winter, and then up to 85° for another, and thus, by acclimating them­selves, gradually approach the region of the pole, even if it took three, four, or five years.

"But if my father's plan was adopted, the riddle of an open polar sea could soon be solved, the pole reached, and Symmes's new world found. My father's plan, as suggested in his petitions to Congress in 1823-4, was to spend a year up North at about 80° north latitude, and there keep an eye to the wild animals that inhabit that region every summer - coming from the north every, spring and returning north every fall - and in the fall of the second year follow them in their journey northward into the country where they go to have their young, and whence they come down among the Esquimaux Indians every spring in fine condition, with their young following them. Whither those animals go, man can certainly follow, if he has one year in which to prepare him­self. All northern explorers agree that. the musk-ox, reindeer, white bear, wolf, foxes, and rabbits, as well as partridges, come from the north in great numbers every spring, and return again in the fall, and if man can follow them, that is, go north with them in the fall, and return with them in the spring, it will only take two or three years at the most to deter­mine if the pole can be reached, or the new world found to which these animals go. Captain Nares is the first northern ex­plorer whoever reached as far north as he did and failed to find more moderate weather than had been passed at a few lower degrees of latitude, and warmer winds coming from the north.