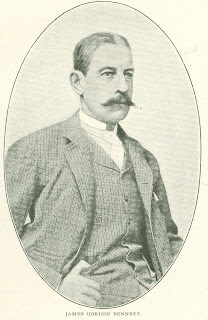 In the sixty-first year of his eventful life James Gordon Bennett is today not only the most commanding figure in jour­nalism, but also the most cosmopolitan type of man to be found anywhere in the world. Although he has lived in Paris for about a quarter of a century, and has at times startled that frivolous capital by the daring of his leadership in adventurous gaiety, outdoing the ebullient eccentricities of the lightest hearted Bourbon princes - rash, headlong, irreverent - he has conducted in all its details the most prosperous and, in many respects, the most substantial and seriously enterprising newspaper in Amer­ica, never for an instant losing control of its every policy, always the initiator. always the master. To find a standard by which this innovating and dominating journalist can be measured, one must go back to the second John Walter, the greatest of the proprietors of the "London Times"; and yet Mr. Walter was only a journalist, while Mr. Bennett is famous as a traveler, yachtsman, marksman, whip, epicure and a man of fashion, at home in all countries. To understand the nomadic tendencies of the brilliant, many-sided man one must remember that he is still a bachelor; and to explain his alternate impulsiveness and far-seeing shrewdness it is necessary to know that he is half Scotch and half Irish. Mr. Bennett was born in New York city on May10,1841. His father, the founder of the New York Herald, was born in New Mill, near Keith, Scotland, on September 1, 1795, of Roman Catholic parents, who were said to be French in their origin. When the elder Bennett was fourteen years of age he was sent to Aberdeen to study for the priesthood, but did not pursue that vocation. He emigrated to Halifax, Nova Scotia, in April, 1819,and earned his living there as a bookkeeper until he went to Boston and found employment as a proofreader. In 1822 he moved to New York, where he was successive­ly the propri­etor of a com­mercial school, a lecturer on political econ­omy, a report­er and an as­sistant editor under James Watson Webb. He founded two small newspapers and failed both times. On May 6, 1835, he issued the first edition of the "New York Herald." In 1840 he mar­ried Miss Hen­rietta Agnes Crean, a poor but talented music teacher, whose parents were Irish. When he died in 1872 he was the richest and most aggres­sive editor in the country, the examplar and protagonist of personal journalism.