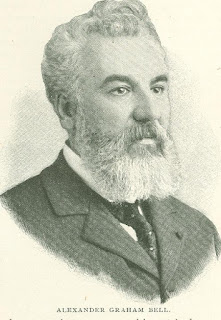 Alexander Graham Bell pre­sents a remarkable example of ap­parent heredity in mental tendency, involv­ing three successive generations: that of the original possessor of the intellectual hereditament in question, that of his son and that of his grandson, the latter being the subject of our sketch. In other words, it might be affirmed that the telephone is the product of three generations of effort in one family to extend and perfect the domain of human speech. The steps fol­low one another with beautiful precision. First, in the early days of the nineteenth century Alexander Bell, a Scotchman, be­gan the march with an invention for re­moving impediments to speech. His life was concentrated upon the study of the natural organs of language and the means of improving them. To make the deaf heal, or at least to furnish them with some equivalent for hearing, was one of his dreams.
His son, Alexander Melville Bell, born at Edinburgh in 1819, took the next step. It was straight in line with his father's, but longer. He became connected with the University of Edinburgh and with the London University and later with Queen's College at Kingston, Canada, as a lecturer on the principles of speech and elocution. He greatly improved his father's system and invented a method of teaching deaf mutes to speak. It was called "visible speech," because it represented the pro­nunciation of words by symbols addressed to the eye, and it is still in use among in­stitutions for the deaf and dumb.
All this was not accomplished without a profound study of the mechanism of the organs of speech and hearing and of the laws of sound, and the results of these studies, directly transmitted to the man who was to make the third stride, led, according to the statement of Alexander Graham Bell himself, to the invention of the telephone.