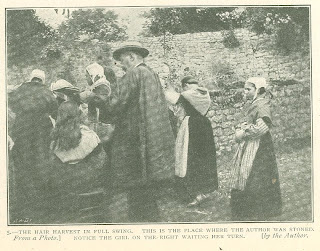 The traffic in artificial hair is a big business. It is interesting in itself, and quite a readable article might be prepared as the result of an inter­view with an extensive dealer in human hair in London or any other great capital. This information, however, is accessible to any journalist who cares to go and get it, and beyond bare mention it forms no part of this paper, which deals rather with the very fountain­head (the joke is not intentional) of this curious industry.
I visited one of the great Paris coiffeurs, and he made the startling statement that "when they reach a certain age - say, forty or fifty years, ­almost all the ladies in Paris use artificial hair, particularly those who wear their hair in twists, or who affect the archaic style. Why," he said, " do you know the price of a single kilogram (over 2lb.) of first class hair - hair that has been sorted, cleaned, and prepared? Well, sir, I do not sell it under a thousand or eighteen hundred francs, according to color, texture, and general beauty.
"And," he continued, "thanks to the life of high pressure which we lead in these modern days, the demand is becoming greater and greater."
With these interesting statements still ringing in my ears, I left the coiffeur and resolved to find out for myself the origin of those mountains of human hair used by the wigmakers of Paris. 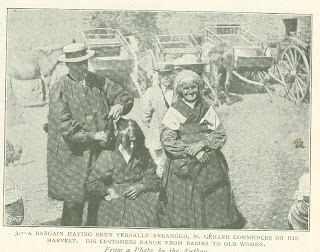 Luck was soon to satisfy my curiosity, for not long afterwards, in the course of a journey through Brittany, my attention was arrested by certain conversations on the subject of a sale of hair. I was told that the peasant women roundabout had their hair cut off periodically and sold to the merchants who went shearing from village to village. I made inquiries without losing a moment, and soon found out that one of the most important of these markets was about to be held in the month of June at the Fair of St. Fiacre. I felt overjoyed, and expressed to my informant my intention of taking photos. of every phase of this strangest of markets.
My friend looked amused. "You had better take care what you are about," he said, warn­ingly, "for both the merchants and their customers are perfect savages, jealously guarding the secret of their queer traffic." But a still more startling statement was to come. "They have already fallen upon one of your artistic colleagues and completely smashed his camera." I felt surprised, and said so. "Tell me all about it," I said. 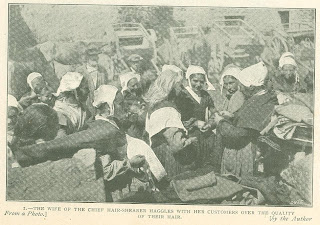 "Oh! it was at St. Jean Trolimon, in the peninsula of Penmarch. M. G. Roluchon, who is the author of many well known works, renowned throughout France, was desirous of photographing a similar scene. Well, one morning he arrived at the fair, alone on a tricycle. Dismounting close to the Calvary at Tronoen, he commenced his preparations by establishing his dark room. He was congratu­lating himself upon the prospect of obtaining excellent and striking photographs, when suddenly the girls and lads fell upon him with sticks, gave him a tremendous drubbing, and smashed his apparatus all. to bits. There appeared, however, to be something more in this than mere aversion to the camera, for M. Roluchon discovered that he had been robbed, when he made his escape bruised and breath­less."
Of course, this account did not sound very encouraging; but, on consideration, I found that the spice of danger made the venture still more attractive. I made up my mind that I would run away, however, in the event of my being attacked, as my friends would never forget it if they learnt that I had been engaged in a ridiculous scuffle with a lot of women.
Well, anyway, this particular day finds me blithely climbing the hill on whose summit is held the famous Fair of St. Fiacre, which is attended by practically the whole agricultural population of the Morbihan. 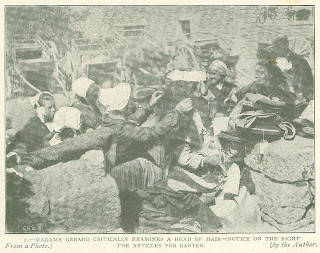