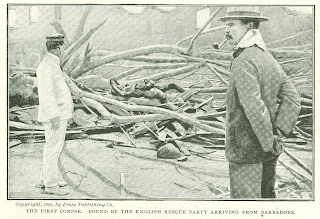 I am a plain sailor and it is not easy for me to tell of those awful hours on the deck of the "Roraima" in St. Pierre harbor when death and destruction were all about me. That scene is like a nightmare to me now. At times it rises before me in all its vividness - at others I wonder if it was not all a horrible dream. Well do I know that it was not a dream, for though leagues of water now separate me from St. Pierre, before me ever is the face of my eldest boy, whose life was snuffed out, as were the lives of more than twenty-five thousand, on that fatal morning of May 8th when Mont Pe­lee with such swiftness poured a deluge of fire and ashes, and a hall of hot stones, upon St. Pierre - when the city was wiped from the face of the earth in a few minutes; when all except one of the ships in the harbor were overwhelmed, first by a wave that swept shoreward with resistless force and then by the rain from Pelee's crater.
In the face of such an overwhelming disaster, the greatest of its kind in the world, the tongue is dumb. Words can­not describe it accurately. I have read Bulwer-Lytton's description of the ruin of Pompeii. If I had the pen of' a Lytton - but even Bulwer-Lytton, if alive today, could not tell adequately of Pelee's fearful eruption. Mere words cannot describe it. No artist could draw it.
When my mind reverts to it now, I feel my heart sink. I feel like covering my eyes with my hands in vain effort to shut out from my mind the picture that comes and goes - as it will all my life.
Sometimes, by sheer force of will I can send my thoughts back to the Martinique of a few brief weeks ago  - the Martinique that was like a jewel of the sea. The island, some twenty-five miles long and perhaps fifteen broad, is between the 14th and 15th parallels of latitude. Longitude 61° West fairly cuts through its center from north to south.

Often have I gazed over that verdant land when our ship floated on the placid waters of the harbor. It was an island of beautiful trees and shrubs, of rippling brooks and cascades, of pretty nooks, of fair fields, and of little lakes that reflected your face as you looked into their waters.
It was a fruitful land, a land that seemed made for a dreaming people-and a dreaming people inhab­ited it. 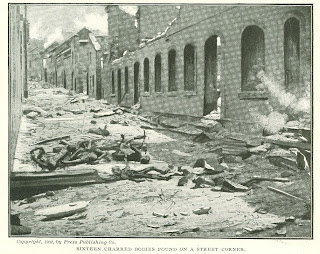 St, Pierre was at the base of the mountains that loomed up back of it, peak on peak. Mont Pelee was a way to the north west, the highest of them all, but, like all the others, it had vegetation growing almost to the very mouth of its seem­ingly extinct crater, a crater that had resolved itself into a lake. The waters of it were clear as crystal; but I have heard that the taste was bitter, as if these waters had been steeped in herbs. On Pelee's side were brooks and rivulets of sweet water, and picnic parties often ascended almost to the very crater's edge before spreading their lunches on cloths laid on the smooth green­sward.
It was a vision of fairyland to see the sun rise in Martinique. It has no dawn as we understand it, and no twilight such as we have in the north. The sun rises very abruptly. The blue of the sky always seemed deeper to me at Martinique than anywhere else, it was such- an intense blue. As the sun lifted above the horizon, you could see all things tinted with lilac. Then yellow and violet waves seemed to be running together and intermingling in the air. The sea lost its green color. It be­came orange in the morning. At night, as the sun sank it would look almost blood­ red.
St. Pierre was a queer old city. Its buildings were ancient. Many of them were relics, I have been told, of the seven­teenth century. It was always interesting to me, when business would allow, to take a short walk through this quaint old city. During my various visits, before that last fearsome one, I had managed to walk pretty nearly all over the place. Once I slept in the city, in a queer, low-ceiled room with one of those curious old dormer ­windows. The bed was a heavy mahogany affair, with ponderous posts. Pictures in heavy frames adorned the walls.
The houses in St. Pierre were all of stone; the narrow streets were flagged in heavy stone blocks. It was the style, I suppose, in those ancient cities of three hundred years ago. And yet St. Pierre could as easily have had wide streets. There was room enough on which to build a city even on this ledge at the foot of the mountain-range, along the shores of the bay where ancient St. Pierre stood. 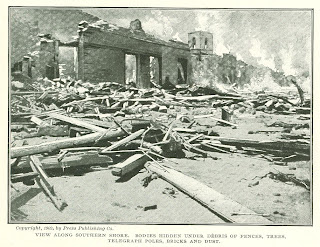 I do not believe there was an entirely level street in the whole city, nor one that was absolutely straight. They all turned and twisted about, around curves, and up­ and downhill. Sometimes, to continue your walk along a street it was necessary to ascend or descend stairways or else a steep incline. Wooden awnings covered with zinc shaded many of the shop fronts. The roofs of the houses were steep and full of gables.
Yellow was the color used to paint the houses, where paint was used at all. The stones of which they were built had grown gray with age, and lichen and moss covered the crevices.
Over some of the many gabled buildings, running vines climbed. Iron or wooden slats took the place of glass in the win­dows. All of them, too, were supplied with heavy wooden shutters that could be closed, making the interiors dark. 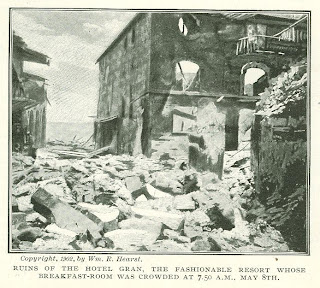