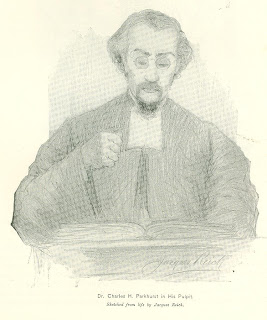 Just twenty years ago a young man was called to preach in the little town of Lenox, Massachusetts. The sermons he preached there were heard in New York, and New York com­manded him. He had attended to his pastoral work in the metropolis for more than ten years, when he was chosen president of the Society for the Prevention of Crime. He had occupied this office for a full year, when, in Feb­ruary, 1892, he delivered a sermon on municipal corruption, the echoes of which still reverberate throughout the English speaking world. The work thus inaugurated was not hastily, spas­modically undertaken, but was accepted as the duty next at hand by one who had been prepared for the task by expe­rience and natural gifts.
So unique a figure in our modern civilization is Charles H. Parkhurst that a conventional biography of him would be impossible. The man is origi­nal to his finger tips. Ordinary lines of criticism fail to meet his case at any point. His life is a succession of con­tinual surprises, even to himself. Not that he is in any sense the creature of impulse, or in any sense wavering or uncertain. But no character in history is inherently less sensational, nor yet capable of creating greater sensations among men. His career has not been marked by that steady growth that might be likened to a coral reef, which, beginning with a tiny stone laid upon the floor of the southern ocean, is in­creased by other tiny stones, with mathematical regularity. He resembles rather a sublime volcano, the forces ever working within, but giving external evidence only by periodical outbursts that are awful in their majesty. The comparison is not hyperbolical. for this delicate organization, almost effeminate in its refinement, bas. by its wonderful temerity and pure singleness of purpose. opened in the modern world a vein of thought and purpose, the end of which no man can foresee. 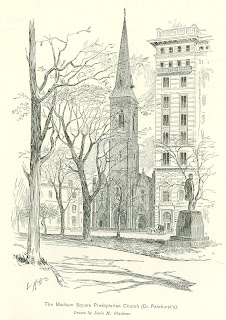 It has been said that the test of great­ness is the effect of character on the emotions of men. Dr. Parkhurst is loved and hated. He is hated with a phe­nomenal intensity that is appalling in its malignity. Strange to say, among the legion of the wicked he has many admirers, while he is bitterly denounced by many men who walk in the straight path themselves. They have not yet grasped the meaning of the man. He is still far beyond them; but he is teach­ing them to grow up to him. Men are either Parkhurst or anti-Parkhurst. There is no middle ground.
This power of exciting the most conflicting emotions in men who agree on ordinary matters, Dr. Parkhurst shares with the greatest men in history. Napoleon was a conspicuous example of it, and in late years our own General Grant.
The reason for the deep admiration and strong love, in many cases, of the criminal element whose ardent foe he is, is not difficult to discover.
It lies in the man's phe­nomenal courage.
His positive enemies, as well as his negative friends, admit it. The man knows not fear. Standing absolute­ly alone, he voluntarily took on his shoulders the most troublesome burden of mod­ern times. Like Antreus, whose strength was renewed every time he was dashed to earth, Dr. Parkhurst has grown with the growth of his burden. The reason for his strength is obvious to a student of his character.
Imbued with the in­nocence of a child, he possesses the sublime optimism of a moral philosopher. He has no doubt whatever of the justness of his cause, and the ultimate suc­cess of his work. Listen to his words on the reform of cities:
"Our great American cities are now a hissing and a byword, but there is a way out of the wilderness, and it is to be found in the manly, patriotic action of .Christian ministers and Christian people. There is always a day after today, and whoever declares that our municipal politics cannot be redeemed is a traitor to his race." 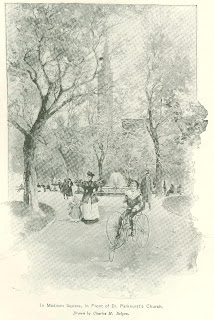