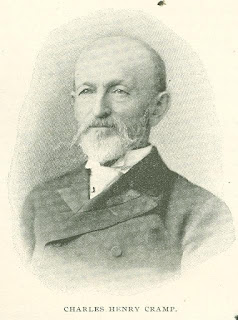 There is one man who, by attainment, results accomplished and eminence in the profession of ship building, of which he is the admitted head, in every way fills the ideal called to mind by the expression "captain of industry."
Charles H. Cramp is a captain of industry in all that the term implies, and if the best title of leadership rests upon a knowl­edge and understanding of industry itself, then he is doubly titled, for he is industry personified.
The people of this country have come to associate him with the great things of this great country, and yet it is to his knowl­edge of detail and the fact that he could do personally anything he might ask any man in his great establishment to do that he owes his most notable achievements.
I have often said that Charles H. Cramp knows more about more things than any other man.
He can tell them to others, too, in a most interesting and instructive way.
When in the midst of the strain of a busi­ness that requires intense application, he will strike off from a subject and pass to some other and dwell upon events and incidents that may seem not to have the remotest connection with the matter under discussion; and yet, when he is through, the question has been illuminated and brought out in the mind of the listener just as a great artist by shades and divergent lines brings out the striking features of a picture. Mr. Cramp, while not large in stature, is a most impressive personality; a large, splendidly shaped head, strong features, mobile, expressive and pleasing face, combined with an alert, yet gentle manner, stamp him at once as a man of eminence even among strangers.

Mr. Cramp is a most generous man. No deserving cause ever goes to him in vain, and it is the heart to which even the "striker" appeals, for I have often seen him slip some such man a bill and a few minutes later lecture us at the lunch table for indiscriminate giving.
The question is usually asked: To what does a certain man owe his success in a certain profession?
In the case of Mr. Cramp and his pro­fession this is easily answered. He knows all about it.
Other men must learn by study or per­fect themselves along certain lines. Mr. Cramp represents in his own person the development of the steel steamship, and every step in this de­velopment has been directed by him per­sonally.
It has been my pleasure and privilege to hear from his lips the story of the labor and study out of which has come the shipbuilding and engineering practice of today. Can one be astonished at the quick judgment and intuition which sees through difficulties and points them out and explains how they may be removed in tentative plans or be surprised at the weight which is given to his opinion?
To tell of the vessels he has built would be simply repetition; to speak of the won­derful establishment of which he is the master-mind and of the refinement of its product would be only to re-tell a tale already known to the engineering world.
The new Ironsides, the forerunner of the battleship of to-day, was designed and built by him, and the story of her building is as inspiring as any other page of Amer­ican history and endeavor.
Mr. Cramp was born in 1828, and at the age of seventy-four still does a day's work that would cause many a younger man to complain.
He made a strong impress upon the Navy Department at the beginning of the new navy, and the government has prof­ited by his great knowledge and experience in all that has been done.
Mr. Cramp likes young men, and never neglects an oppor­tunity to give them advice and assistance in developing char­acter.
In the manifold duties of his ship­building work he finds time to write able and forceful articles upon great public questions, and his words always carry conviction, as he detests deceit or hypocrisy in any form. Could he be spared from the shipbuilding world, he would make an ideal senator. Philadelphia has produced but few men of such great attainment - and no man who has made that city better known through­out the world.
Mr. Cramp is an evidence that it is not only the young who are strenuous, and he is an example of the highest and best development of American manhood.
Originally published in Cosmopolitan Magazine.  May 1902.
----------------------------------------------------------------------------------------------------