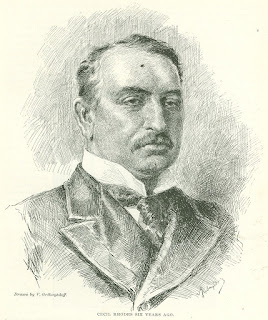 The far-sighted provisions of a will which contemplates the keeping at Oxford of more than a hundred American students must continue the interest of Americans in the remarkable man whose money furnishes the endowment. Never have we had more contradictory estimates of a man's character than those given of Cecil Rhodes. Few have had more de­voted friends and admirers. Few have had more positive enemies.
Unfortunately, the published testimony as to his life is largely from manuscript prepared by his friends; his enemies are scattered and mostly un-influential with the press. Any conservative estimate of his life must for the present be prepared largely from data which his friends have placed on record and from the general re­ports of his public actions.
Perhaps a key to the life of Rhodes may be found in a sentence uttered upon the occasion of his visit to Oriel Hall, Oxford, at the time of receiving a D.C.L. He claimed that he had based his conduct upon Aristo­tle's definition of virtue: "The highest activity of the soul living for the highest object in a perfect life"; this rendering being Rhodes's own instead of the accepted: "Rule one' s life by the highest principle of right." 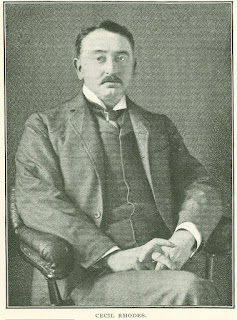 It is a conception which has given self ­satisfied consciences to a thousand histori­cal characters having work to do which required ruthless wills. In all time such men have justified themselves with the solace that they had before them a great end and that "the end justified the means." It is a convenient idea for the man who seeks an excuse for carrying out a previously determined purpose.
Rhodes's derivation was from a family which had been money-makers: in one genera­tion as land accumulators and in another as controlling a class of labor in which large numbers of men have been employed, from the days of the children of Israel in Egypt, at low wages - the making of bricks.
Overtraining in a college crew at Oxford and the weak lungs which so often result sent Rhodes to Africa in search of health, a brother, Herbert, being already established there. Soon thereafter the discovery of diamonds attracted the at­tention of the world and the young man found himself in possession of a rich claim. A law which was intended to scatter the diamond wealth of Africa into as many hands as possible restricted Rhodes's ownership to one claim. He had that sort of masterfulness which one often sees in men of large frame who dominate smaller frames. If a law stands in the way of such men, the law is apt to be either violated or repealed. Rhodes had not reached the degree of self­ confidence where he chose to violate the law; so he set about its repeal. Under the new law it was possible to acquire ten diamond claims, and it was soon discovered that Rhodes held ten claims. This, how­ever, did not satisfy his ambition. It is the story of the human mind that, having one we want two, having two we want four, and having four we want eight, and so on ad infinitum. No one has ever been able to name a duplication at which the mind of such a man is willing to stop. 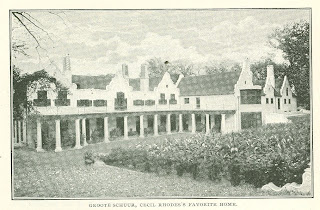 The law limiting ownership to ten claims stood in the way of Rhodes's schemes, and this law also was repealed. Presently he found himself one of three interests con­trolling practically the whole diamond field, and subsequently these three resolved themselves into two. One was controlled by the notorious Barney Barnato, who, after amassing endless millions, found life so unprofitable that he is supposed to have jumped into the sea from a ship on his way in home. Barnato was sharp and shrewd, but he was no match for Rhodes. His stocks were juggled and his life bedeviled in unexpected and ingenious ways, until at last he was willing to accept peace on Rhodes's terms, while Rhodes became the master, in the South African diamond fields, of the greatest unearned increment the world has ever known.
Having jug­gled the laws, ousted other owners and intimidated Barnato, Rhodes was now ready for his great coup: namely, the juggling of the world of dia­mond buyers. Long before Barnato had consented to play second fiddle, it was known that the production of diamonds was many times greater than the demand and that if each mine­ owner were permitted to market his product there would come a time when diamonds would not be worth twenty-five cent on the dollar. The public was rapidly waking up to this fact. If depreciation in diamonds had once begun, there is no telling where it would have ended. Rhodes said: "I will put all of these diamonds, into underground vaults and lock them up; none shall be sold unless there are buyers. The press shall be brought into play to tickle the public fancy. Curious and ingenious articles shall be published, showing how the diamond is the perquisite of person of the highest fashion, so that the foolish ones of earth shall be titillated and induced to bedizen themselves with a gem which cannot be distinguished from the manufactured stone even by the eyes of the first experts."Only when subjected to chemical processes is it possible to determine whether it is a cheap manufactured article or the rarer stone dug out of the ground.
Never in the history of the world has there been a scheme more carefully wrought out, more ela­borate in its details, more extended in its scope or more cunning in its execution than this of Rhodes. He should have the full­est credit for his deftness in manipulation. It required a widespread net to accom­plish what he had under­taken, and he must have co­operation in England. In­cidentally he found that great names would be of the utmost use, and he proceeded. to secure them. It is said that during his trial after the Jameson raid, when many believed that the end would be impris­onment, he sat with the most serene confi­dence, smiling at his friends and assuring them that they need not be alarmed; that Mr. Chamberlain would see to it that he was fully protected. It was commonly re­ported that it was for Chamberlain's own interests that Rhodes should not be pun­ished and that the whole power of the ministry should be used to prevent any such catastrophe. Chamberlain does not seem to have been the earliest of Rhodes's victims. In the first instance, by a large subscription ingeniously placed in Mr. Gladstone's campaign fund, he placed that statesman in an embarrassing position from which his most earnest friends have been unable entirely to exonerate him.
The diamond mines, when discovered, were in territory belonging to the Boers. A mock contest was gotten up between a native chief and the Boers and, through misrepresentation to the Boers, a British referee appointed to decide the dispute. It is supposed that the offer was made Chief Waterboer to decide in his favor and pay him a large indemnity if immediately upon the decision he would cede his territory to Great Britain. At all events, this pro­gram was carried out, and the surprised Boers found that instead of an international judge they had simply appointed a trustee to convey their interests to the British Empire. This is the way the diamond fields came to be under Great Britain. Howard Hensman, the biographer of Rhodes and his admirer and the admirer of everything British, is compelled to say of this transac­tion: "The Boers felt that they had been jockeyed out of their rights by the sharp practice of the British ... Though the boundary of the Free State was very vaguely defined in this region, the weight of evidence seems to be in favor of the Boers."
Having this example before his eyes, Rhodes recognized the advantage of having every available possession added to the country in which he was a leading factor. From time to time he was a prominent actor in the acquisition of territory through schemes not unlike the transaction just described. These several territories were necessary to his aims of great fortune, and he saw to their acquisition.
Presently he recognized that it would be to his advantage to sink the purely personal aspect of this territorial aggrandizement and to give it a name which would excite the .enthusiasm of his countrymen. He devised the phrase "Empire-Building." The incon­siderate threw up their hands and shouted with enthusiasm.
Henceforward the acquisition of fortune took on another phase. When he returned to England, he was hailed as a great man. He was most fortunate in having as his friend the English prophet and enthusiast, Mr. Stead. Stead wrote an article in the "Review of Reviews" in his most brilliant style which proclaimed Rhodes a master­mind. From that time out hero-worship­pers the world over bowed down to the image of Cecil Rhodes.
Originally published in Cosmopolitan Magazine.  May 1902.
----------------------------------------------------------------------------------------------------