By Richard H. Titherington.
Scenes from the life of tile dean of the United States Supreme Court. The adventures of a "Forty-Niner" in the stirring days of the California gold rush, and how he ruled a frontier town as Alcalde of Marysville.  The story of a man of pluck. 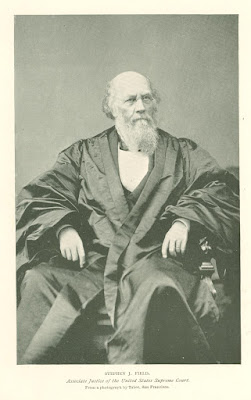 To Mr. Justice Field there have come, after an earlier career notably event­ful, thirty years of distinguished service upon what may justly be called the lofti­est judicial tribunal in the world. Very few members of the Supreme Court of the United States have held their onerous and honorable office so long. Chief Justice Marshall's record of thirty four years has never been surpassed. Justice Field may yet reach it. He belongs to a family re­markable for sturdy longevity as well as for Intellectual vigor. Of the nine chil­dren of his father a quartette of brothers have lived to both years and fame - the three other members of the quartette being David Dudley Field, the veteran jurist; the late Cyrus Field, the founder of the Atlantic telegraph; and Henry Martyn Field, well known as preacher and as au­thor.
The Fields came of old Connecticut stock. Both of the justice's grandfathers served in the Revolutionary war, each of them holding the rank of captain. His father took orders in the Congregational church, and died in 1867 after more than sixty years ministry at Haddam, Con­necticut, and Stockbridge, Massachusetts. Stephen J. Field was born at the former village in November, 1816.

Yet California has no more loyal son than this child of Puritan ancestry, whose schoolboy days were passed in the far East. Only on the sunset shores of the Pacific does he find the same glittering atmosphere in which the Athenians of old lived and moved, and in which he spent those formative years that come between a boy's thirteenth and sixteenth birthdays. At that time of Justice Field's life, Greece's brave struggle for freedom - the heroism of Marco Bozzaris, the dark tragedy of the Scio massacre - had aroused deep sympathy in America. Among other tangible expressions of this feeling, a fund had been raised to found a school for Greek girls. Of this undertaking the Rev. Josiah Brewer, Justice Field's brother in law, was placed in charge; and when he started for the Levant Stephen went with him. 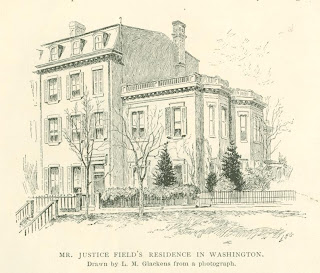