By Delevan L. Pierson.
A distinguished American missionary editor tells us all about a most remarkable sect, whose members, persecuted in Russia, recently emigrated to Canada. They eat no meat, have property in common, and offer no resistance to violence. The men refused to serve in the Russian army; hence the persecution. That the Spirit Wrestlers are a brave and hardy race will be evident from the remarkable photo showing the team of women dragging the plough. 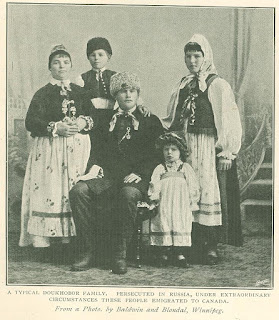 It is not an uncommon sight, in some parts of Europe, to see women harnessed with dogs, and drawing carts or canal boats; but it may seem strange that in Christian Canada women drag the plough without even the help of a beast of burden. These women are Doukhoburs, thousands of whom have been driven from Russia by perse­cution, and have been welcomed in Western Canada, where they have been given land and other help to enable them to make a living.
Now, why were these peo­ple driven from their homes in the Caucasus? Because the Government of the Czar­ - author of the Peace Confer­ence -- would not allow them to live up to their belief in "Peace at any price." For a century and a half these Douk­hobors (" Spirit-Wrestlers"), as they are called, have been subject to terrible persecution because of their peace-loving nature and their persistent refusal to take up arms against their fellow men. Five thousand of them are still in exile in Siberia, and seven thousand others have sought refuge in Western Canada. 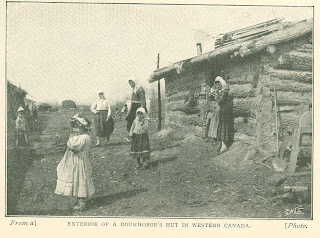 They call themselves "Universal Brotherhood Christians"; and the sect first appeared about 150 years ago in South Russia. They believe in taking literally the Bible commands to "Love your enemies" and "Resist not evil"; and from the first they have suffered much persecu­tion from the religious and political rulers of Russia. Alexander 1 allowed them to settle on the shore of the Azof Sea; but Nicholas 1 in 1840 banished them to Trans­Caucasia, where it was thought the wild frontier tribes would probably exter­minate them. There, however, they won the friendship of the hill tribes, and enjoyed half a century of pros­perity and peace.
The man whom the Douk­hobors now look up to as their leader is Peter Verigin. In his younger days he is said to have been rather wild, for con­scription had not as yet been introduced to the Caucasus, and as the Spirit­ Wrestlers waxed fat, they forgot the precepts of their fathers, and smoked, drank strong drink, accumulated private property, dis­cussed their religion only as a matter of intel­lectual interest, and eased their consciences by much charity. Then up rose Peter Verigin, who set himself energetically to work to revive the old faith and customs of the Doukhobors. He and they returned to vegetarianism and total abstin­ence from intoxicants and tobacco. They re­divided their property voluntarily, so as to do away with the distinctions between rich and poor, and again, they began to insist on the strict doctrine of non-resistance to violence. The Imperial Russian Government felt that Peter Verigin would be better removed, espe­cially as the conscription was then being introduced into the Caucasus. He was therefore, about twelve years ago, banished to Lapland, but was afterwards transferred to Obdorsk, in the north of Siberia, in order that he might be more completely cut off from his people. 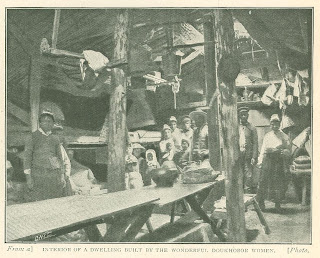 The Doukhobors, however, did not abstain from trying to establish communication with Verigin even at that distance. They also dispatched one of their number to visit him. After many weeks of travelling, this Doukhobor reached the last post town before Obdorsk. Here he had to change reindeers, and while he was resting he was visited by a man, who questioned him as to his destination and the object of his journey. The Doukhobor told no lies: but suspecting that he had to do with an emissary of the police, as soon as the visit was over he made haste to get fresh reindeers harnessed to his sledge, and pushed on quickly to Obdorsk. He reached his destination safely, saw Peter Verigin, had some conversation with him, and delivered letters. But their interview had not lasted very long before the police arrived in pursuit of the traveler, and sent him back again to the Caucasus. Some time later the same Doukhobor was again dispatched on the same errand. His mission was now more difficult than before. The police supervision of the Doukhobors had become stricter, and the police in the north had been warned to keep a stricter watch over Verigin.
But somehow or other the Doukhobor finally reached Moscow, where he consulted friends as to the best mode of procedure. He was advised that it was useless to attempt the direct road to Obdorsk, which he had travelled before. The only thing for him, therefore, was to travel to Archangel, and then, drive eastward, with rein­deers, many hundreds of miles till he reached Obdorsk from that side. He set out, but at Archangel was arrested and ordered back to the Caucasus. The police furnished him with a passport marked with instructions that he was to be allowed to travel nowhere but towards his own village. With this pass he was sent from one police post to another. Before he had gone far, however, he found that the name of his obscure Caucasian village was not familiar to the police officers into whose hands he had passed, and he availed himself of this to turn his face eastward and push on once more toward Obdorsk, using his pass, when necessary, as a, proof that his journey was sanctioned by the police. In this manner he made his way almost to Verigin's place of exile almost, but not quite. He was once more arrested; and this time the police took care of him till he reached the Caucasus. 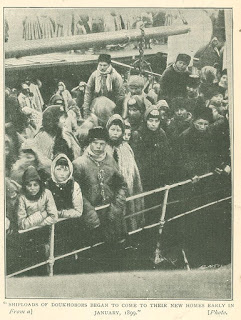