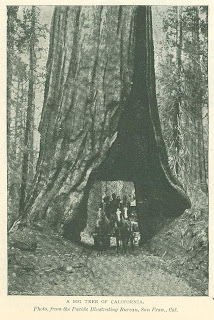 A German ship named Maria Hackfield was lately dispatched from San Francisco to London with a cross section of a Cali­fornia redwood tree, consigned, it is said, to Mr. William Waldorf Astor. The shipment is reported to be the result of a bet recently made by Mr. Astor, who, at a dinner party, told his English friends some astonishing stories about the size of the redwoods. Mr. Astor wagered that he could procure a cross section of a redwood large enough to form a table for forty guests. This wager will undoubtedly be won with ease. The cross section is 2ft. in thickness, showing the greater diameter of the tree to be 16ft. 6in., and the smaller diameter 14ft. 11in. The circumference is, therefore, about 52ft., which ought to accommodate forty average men without difficulty.
Odd to say, also, this section, notwith­standing its great size, is but a tiny thing, after all. Many redwoods in California measure 60ft. in circumference, and some have measured 75ft. These, again, are outstripped in size by the so ­called "big trees" of the Calaveras and Mariposa groves, the like of which are seen in no other part of the world. Many English people know them only through whisky and wine adver­tisements. The irrepressible ad­vertising agent has, in fact, seized upon the very tree shown on this page, in order that public attention may be strongly drawn to the merits of the juicy Californian grape. Others know of them through frequent visits to the Crystal Palace, where the bark of the grand old "Mother of the Forest," which measured 90ft. in girth and 321ft. in height, has been exhibited for years. 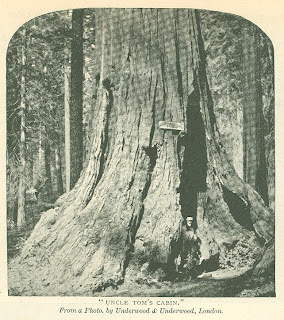 Botanically speaking, both the redwoods and the "big trees" are species of the genus Sequoia - a pretty name given to them in honor of Sequoyah, the Cherokee Indian who invented letters for his people. They are both natives of California, the redwoods being confined to the coast ranges and the "big trees" to the western slopes of the Sierra Nevada Mountains. They are dis­tinguished by their peculiar fibrous bark and their rich color of cinnamon brown. The redwood grows in such large quantities that it is a fit material for commerce, and the red­wood industry of Humboldt County, California, where the trees abound, is enormous. The "big trees," on the other hand, are carefully guarded by the Government. The Mariposa Grove, which contains over seven hundred majestic trees, has been set apart by Con­gress as a National park, and the Government commissioners are able to resist the encroach­ments of every­thing except forest fires, which, at times, have sadly decimated and des­troyed the trees.
Many of the trees are known throughout the world by charac­teristic names given to them in honor of popu­lar heroes and favorites of the hour. A section of one of the fallen kings of the Mariposa group is called "Chip of the Old Block," and our illustration gives but a faint idea of what the "old block" must have been in the day of its towering grandeur. Another tree, shown on the following page, has been called "Uncle Tom's Cabin," on account of the tent like opening at its base - an opening in which the stalwart figure of a man is dwarfed. The most famous tree is called "Grizzly Giant," which is over 93ft. in circum­ference at the ground, and over 64ft. at a distance of 11ft. from the base. It reaches a height of 200ft before throwing out a branch, and its first branch is 8ft. in diameter. "Grizzly Giant" is the largest living tree in the world, and stands over 275ft. high. These figures can, however, but barely suggest the mammoth girth of this celebrated sequoia, which people travel from al1 parts of the world to see. Nor can the visitor realize that it and its neighbors have been stand­ing for 2,500 years. Yet such is the estimated age of these forest giants. They were but bushes when Nero fiddled before burning Rome. 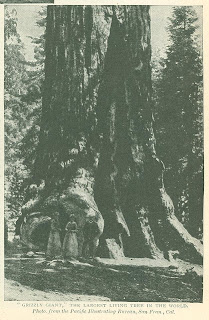 The" big trees" were discovered in 1852 by a white hunter named Dowd, who in that year found himself in the neighborhood of Calaveras Grove. The date 1850 is carved on one of the trees, and this has led many people to think that the big trees had been visited previously to 1852. Since that time, the trees have been one of the remarkable natural "sights" of the United States. Botanists have quarreled over the proper name to give them, and have esti­mated their age from the rings in the fallen logs. Cross sections have been cut and forwarded to different parts of the country, in order that people might see for themselves that the stories of the "big trees" were true. In Boston, several years ago, one of these cross sections was erected, in a public square, and dances were held on its polished surface. The idea of using a tree for such a purpose originated in California, where a stump of one of the trees has had a house built upon it, to serve as a ball-room.
A glance at our illustration of the prime­val redwood forest in Humboldt County, California, the first of several redwood photographs lent to us by the Hum­boldt Cham­ber of Com­merce, will give an idea of the massive trunks of these valuable trees, which stretch out for 100 miles along the coast, "not in sentinel groves," according to a poetical writer, "but in one continuous belt - dense, stately, dark, and forbidding." The forests are apparently imperishable, except through the axe of the woodsman, and this is wielded with care. The trees are never injured by fire. The wood resists combustion, and is hard to burn even when dry. The redwood is the only lumber that can take the place of the white pine, answer as a satisfactory substitute mahogany and black walnut, displace oak for redwood ties, cypress and cedar for shingles, and surpass all other woods for dura­bility when in contact with earth, or when exposed to moisture. These qualities make the redwood industry important to the builders of cities and homes, of rail­roads, flumes, and conduits, to those engaged in mining, manufacturing, and agri­culture all over the country. It is important to the con­sumers, and they should feel as gratified as do the people of Humboldt, that there is still a reserve forest containing 5o,ooo,ooo,ooo ft. of timber, which can be utilized for so many purposes. Redwood will make an enduring foundation, solid walls, and an imperish­able roof. Thus it provides the substantial equipment for any structure. But it may be made to embellish and adorn the home, as well as shelter the inmates. As a finishing wood it is un­equalled, and for cabinet material some qualities of it are superior. Even the stumps, it is said, refuse to perish or even to die, but send forth shoots and sprouts which, if left undisturbed, would renew the forests in course of centuries. 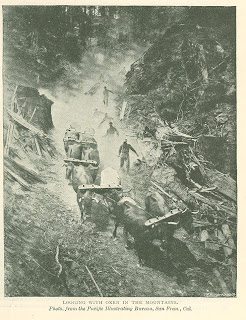