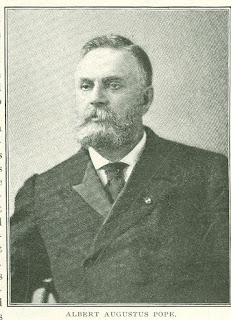 The wheel is the symbol of commerce, of traffic, of human communication. The wheels of the world are numberless. On them the products of the earth are moved to the countless markets of the globe. They bring, they spin, they weave.
But the wheels of production, of manufacture, of commerce, of traffic hither and yon, are dependent on the road. The motive­ power of the world has no value or signifi­cance unless the skill, the wealth and the industry of men have constructed high­ways of earth and iron along which wheels may carry what wheels have made.
Man is a slow student at the best. Na­tions at birth have the ocular dimness of the infant's eye. The Appian Way was not constructed until Rome had come to the wisdom of one about to die. Had she apprehended a century sooner what a mighty bond of empire a magnificent high­way, stretching from one extremity of her boundary to the other, would be, her eagles might be flying today. The road builders are the empire builders of the world.
Among us Americans certain men have grown to that measure of intelligence which apprehends this fundamental truth. The steamship, the railroad, the canal and the highway are the four factors that enter po­tentially into the perpetuity of the republic, and of .these four the last is the most worthy of the country's attention. And this is true in the first place because it stands in closest connection with the pros­perity and happiness of the greatest number of people, and in the second place because it has hitherto been almost wholly over­looked or stupidly neglected.
Some twenty years ago the idea of im­proving the highways of the country came to certain men among us. The average roads were in a wretched condition. Econom­ically the status was deplorable. Traction­ power. was taxed unmercifully. It cost the farmer as much to draw one ton to market as should have drawn five. Social life was narrowed by the slowness and difficulty of travel. The family was isolated. Not only did communities have no knowledge of road making, but they had no pride in good roads. Good roadways were looked upon by the average citizen as a luxury and not as a necessity.
Such was the condition of things twenty years ago. The apprehension of it and of their duty in view of it came to many al­most simultaneously. And then the agita­tion for the improvement of the highways of the nation was be­gun and pushed on­ward. What has been accomplished is evi­dent to all. No re­formatory agitation ever passed from bud to bloom and on to fruiting so rapidly. Legislatures have been convinced, town offi­cers educated, the press enlisted, magazines drafted into the service of a benevolent conception and a vast amount of novel and interesting informa­tion spread broadcast. among the people. Best of all, certain bits of highway have actu­ally been constructed in thousands of towns which serve as an object lesson to the citizens of the locality. The nation is well started in a determined effort to improve its roadways.
And it is not withholding just praise from any to say that no man has done more to advance this undertaking than Colonel Albert A. Pope of Boston, who is so uni­versally known as the founder of the manufacture of bicycles in the United States and the pioneer of the great movement for better American roads.
To him the country owes the introduction of the bicycle. To him is due, more than to any other single individual, its improvement and popularization. From the old veloci­pede of two decades ago to the low, easy­ going, elegant American bicycle of today, measured by change in structure, speed, price and adaptation to popular wants, is a vast distance. It required courage to enter upon the business. He had it. It required patience to develop it. The needed patience was his. The highest order of persever­ance was demanded. That was not want­ing. In his hands a hazardous venture be­came an unqualified success. Today over half a million bicycles are manufactured and sold annually. They minister to the health of the people. They multiply their pleasures. They lighten the toil of wage ­earners. They assist convalescence to health. As a popular benefaction, the bicycle is one of the greatest inventions of our age. And for all that the bicycle has cost in time, toil, risk and daring outlay of money, Colonel Pope must, in justice, be accredited the largest share. But for his courage, patience and perseverance, the American people would not have the splendid machine of today.
From the bicycle, doubtless, came to his mind the suggestion of improving the high­ways. This was natural. Colonel Pope is the owner of very large interests; good roads assist those interests. But it would be most untrue to say that because of this his devotion to the great work of im­proving the roadways of the country lacks the clement of sincerity and regard for the public good. He is not built that way. He is a man of intelligence. He is quick to apprehend the needs of the country. He is a man of enthusiasm for large and noble results, and hence he has spent time, thought and money freely that the highways of the nation should be able to accommodate the traffic of the country and thus supply one of the greatest needs of the people.
Originally published in Cosmopolitan Magazine. May 1902.
----------------------------------------------------------------------------------------------------