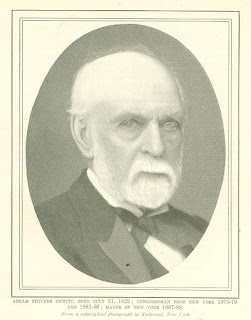 The other day the New York Chamber of Commerce decided that it was time to issue a protest against the continued delay in the legal preliminaries to the Pennsylvania Railroad's great work of tunneling the North River and establishing its terminus in the heart of New York.  The representatives of the business interests of the metropolis appointed Abram S. Hewitt to voice their desire that a plan promising such benefits to the city should not be obstructed by petty or selfish opposition. At the same time Mr. Hewitt, was engaged in a corre­spondence on the subject of the Penn­sylvania coal strike which attracted more attention, and exerted a greater influence on public opinion, than any other utterance on that burning ques­tion. Such are the avocations - the amusements, I had almost said of a man who celebrated his eightieth birthday last July, and who is still the active head of a large business concern.
Mr. Hewitt's best services to the pub­lic have been done as a private citizen. In New York politics, indeed, he never seemed quite in place. It may have been that he was too square for his sur­roundings, like the proverbial rectangu­lar peg in a circular hole. The result was a maximum of friction without a maximum of efficiency in operation. His election to the mayoralty was sup­posed to mean a general reform of the municipal organism, but as a matter of fad little or no permanent good was ac­complished, and when his term closed the machine had no difficulty in reas­serting its power.

Abram S. Hewitt is not a politician; he is a statesman. For that reason, he was far more in his element in the House of Representatives at Wash­ington than in the New York City Hall. Early in his legislative career, which lasted ten years, he became a power in the House, and won a national reputation as a speaker and as an au­thority on the tariff and other public questions. If he had cared to remain in Congress, he might have done still more. He might have set his name beside those of the great orators and lawmakers who have molded the history of the country. But like others who have tried it, he found the sacrifices of a Congressional career too heavy, the prize too hollow, the strain too severe. He is not a man to spare himself, but his health has never been robust; during most of his life he has been a martyr to insomnia. It is a marvelous spiritual fire that keeps him, at fourscore years, full of the keenest intellectual energy.
If within a year or so New York shall possess, for the first time in its history, a safe, quick, convenient, and efficient system of rapid transit, it is to Mr. Hew­itt, more than to any other one man, that the city will owe the inestimable boon. The commemorative gold medal given him by the Chamber of Commerce two years ago was no more than a just recognition of his work. A trained en­gineer, an able business man, and pos­sessed of rare foresight and clarity of view, he pointed out the way to what was probably the one practicable solu­tion of the exceedingly difficult prob­lems that the question involved. Just fourteen years ago, during his mayor­alty, he made public his plans for a rail­way up and down Manhattan Island, very nearly on the lines finally adopted; and, a far more important point, he sug­gested the financial methods that made it possible to build the road - the loan­ing of the city's credit to the contractor, the leasing of the property to an opera­ting company, and its final reversion to the municipal government by means of a sinking fund. His recommendations had no direct result at the time, but they have been followed almost to the letter, luckily for all concerned.
Born in a log cabin, the son of an English immigrant who failed to find fortune in the new world, Mr. Hewitt is self educated and self made, with the aid of a fortunate marriage to the daughter of the late Peter Cooper. He is a rich man who lives a very simple life. He has a comfortable but not gorgeous townhouse on Lexington Avenue. in an old fashioned neighborhood, and a pleasant but not palatial country place in the hills of northern New Jersey.
Twenty years ago Mr. Hewitt looked an old man, white haired, with a bent figure and a heavily lined face. Today he looks little older. His eye is not dimmed, his step is still quick and firm; his mind is as keen as a knife, and his tongue can he equally incisive, He has decided opinions and a forcible way of expressing them. He can be bitter. but he is never bilious or pessimistic. "I believe," he said not long ago, "that every day the world, instead of going down, is going forward;" and he has done more than his share to move it in that direction. He is absolutely honest, wholly unafraid; a grand old man, if New York ever possessed one.
Originally published in Munsey's Magazine.  December 1902.
----------------------------------------------------------------------------------------------------