Sculptor Auguste Rodin Secrets of His Genius As Revealed By Himself 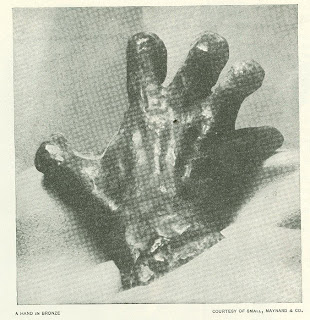 There are those who assert that Auguste Rodin is the greatest sculptor since Michael Angelo. However that may be, he is certainly the most astounding.
Those who have stood in wonder before one of Rodin's tremendous creations have longed to look into the sculptor's mind and know the secret of his genius. This desire has now been in large measure fulfilled, for in a sumptuous volume published by Small, Maynard & Company we have a series of conversations on Art between Rodin and Paul Gsell, in the reading of which we receive an explanation of many of the thoughts that Rodin has expressed in clay. He gives us an interpretation of art as he sees it, and immediately much of the mystery that has veiled his work vanishes. How clearly he reveals to us the spirit of his work is shown by the following selections from the conversa­tions that are recorded in M. Gsell's book: OUR INHERITANCE.
Last year, at the close of a beautiful day in May, as I walked with Auguste Rodin beneath the trees that shade his charming hill, I confided to him my wish to write, from his dictation, his ideas upon Art.
"You are an odd fellow," he said. "So you are still interested in Art! It is an interest that is out of date.
"Today, artists and those who love artists seem like fossils. Imagine a megatherium or a diplodocus stalking the streets of Paris! There you have the impression that we must make upon our contemporaries. Ours is an epoch of engineers and of manufacturers, not one of artists."
"I know," I said, "that Art is the least concern of our epoch. But I trust that this book may be a protest against the ideas of today. I trust that your voice may awaken our contemporaries and help them to under­stand the crime that we commit in losing the best part of our national inheritance-an intense love of Art and Beauty."
"May the gods hear you I" Rodin answered.
REALISM 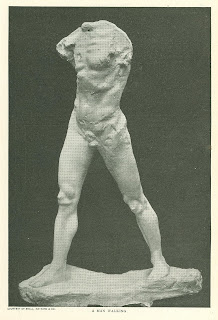 "What astonishes me in you," said I, "is that you work quite differently from your confreres. I know many of them and have seen them at work. They make the model mount upon a pedestal called the throne, and they tell him to take such or such a pose. Generally they bend or stretch his arms and legs to suit them, they bow his head or straighten his body exactly as though he were a lay figure. Then they set to work. You, on the contrary, wait till your models take an interesting attitude, and then you reproduce it. So much so that it is you who seem to be at their orders rather than they at yours."
Rodin, who was engaged in wrapping his figurines in damp cloths, answered quietly:
"I am not at their orders, but at those of Nature! My confreres doubtless have their reasons for working as you have said. But in thus doing violence to nature and treating human beings like puppets, they run the risk of producing lifeless and artificial work."
BEAUTY
"What is commonly called ugliness. in nature can in art become full of great beauty. "In the domain of fact we call ugly what­ever is deformed, whatever is unhealthy, whatever suggests the idea of disease, of de­bility, or of suffering, whatever is contrary to regularity, which is the sign and condition of health and strength; a hunchback is ugly, one who is bandy-legged is ugly, poverty in rags is ugly. Ugly also are the soul and the conduct of the immoral man; of the vicious and criminal man, of the abnormal man who is harmful to society; ugly is the soul of the parricide, of the traitor, of the unscrupulously ambitious.
"And it is right that beings and objects from which we can expect only evil should be called by such an odious epithet. But let a great artist or a great writer make use of one or the other of these uglinesses, instantly it is transfigured: with a touch of his fairy wand he has turned it into beauty; it is alchemy; it is enchantment!
"Let Francois Millet represent a peasant resting for a moment as he leans on the handle of his hoe, a wretched man worn by fatigue, baked by the sun, as stupid as a beast of burden dulled by blows - he has only to put into the expression of this poor devil a sublime resignation to the suffering ordained by Destiny, to make this creature of a nightmare become for us the great sym­bol of all Humanity."
MODELING
It was a delightful little antique copy of the Venus de Medici. Rodin kept it there to stimulate his own inspiration while he worked.
"Come nearer," he said.
Holding the lamp at the side of the statue and as close as possible. he threw the full light upon the body.
"What do you notice?" he asked.
At the first glance I was extraordinarily struck by what was suddenly revealed to me.
The light so directed, indeed, disclosed numbers of slight projections and depressions upon the surface of the marble which I should never have suspected. I said so to Rodin.
"Good!" he cried approvingly; then,  "Watch closely."
At the same time he slowly turned the moving stand which supported the Venus. As he turned, I still noticed in the general form of the body a multitude of almost im­perceptible roughnesses. What had at first seemed simple was really of astonishing com­plexity. Rodin threw up his head smiling.
"Is it not marvelous?" he cried. "Con­fess that you did not expect to discover so much detail. Just look at these numberless undulations of the hollow which unites the body to the thigh. . . ."
He spoke in a low voice, with the ardor of a devotee, bending above the marble as if he loved it.
"It is truly flesh!" he said.
And, beaming, he added : "You would think it molded by kisses and caresses  "Then, suddenly, laying his hand on the statue, "You almost expect, when you touch this body, to find it warm."
A few moments later he said:
"Well, what do you think now of the opinion usually held on Greek art? They say - it is especially the academic school which has spread abroad this idea - that the ancients, in their cult of the ideal, despised the flesh as low and vulgar, and that they refused to reproduce in their works the thousand details of material reality. 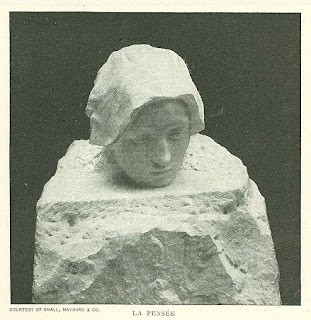