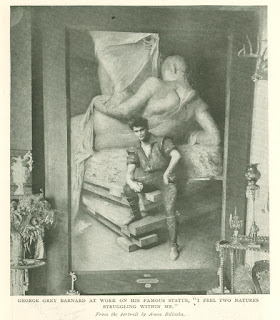 One of the most interesting figures in contemporary American art is Mr. George Grey Barnard, the sculptor, whose work - notably his statues exhibited at the Salon of the Champ de Mars in Paris - has received the unqualified praise of the world's greatest critics. Here is a man worthy to be ranked with Michelangelo, some of them have been enthusiastic enough to say; for not only is his work different from that of any other modern sculp­tor, but he has created a new interpre­tation of man and of nature, and in his conceptions are the virility and fresh­ness of eternal youth, and, directing it, a wise and classical temperament.
Mr. Barnard was born in Pennsyl­vania, the son of an Indiana clergyman, but most of his childhood was spent in or near Chicago. When he was about five years of age he made friends with a retired sea captain, whose geological collection, gathered from all parts of the world, first directed the childish impulse toward that knowledge of nature which was the beginning of his artistic life. He roamed the fields and woods for curious stones and shells, which he found more to be desired than toys, and more marvelous than story books.
The boy who found his chief interest in stones was father to the man who is today working out the epic of humanity in marble. Mr. Barnard is the essence of his work. He takes nature as his context, and man as a detail in the great unfolding plan. 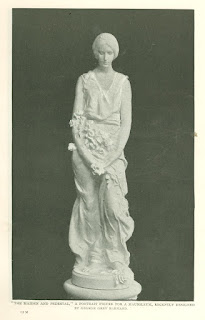 Mr. Barnard's colossal group, "I Feel Two Natures Struggling Within Me," is well known. It shows the mo­mentary triumph of the baser over the finer nature in man's self, and the energy and strength of the recumbent figure of the group are wonderful. The Metropolitan Museum of Art possesses this work, it being the gift of the Al­fred Corning Clark estate, which also presented the bronze statue of the Great God Pan to Central Park. Into the latter figure, which has not yet been placed in position, Mr. Barnard has in­fused an effluence of adolescence and wild freshness that is the very ecstasy of the poet's dream of the wood god.
While Mr. Barnard has always broken away from tradition and conventionality in his character of design and expression, he has shown himself to be no less master of the quieter methods. A figure for a mausoleum, recently exhibited by him, is character­ized by a refinement of treatment and delicacy of modeling that are exquisitely simple and chaste in effect. The work is known as "The Maiden and Pedestal," but it is said that it is the portrait of the young girl whose tomb it is to adorn.
The design of this work takes its conception from the inscription on the pedestal, which was written by the young girl a few weeks previous to her death, and in which life is likened to the bloom and decay of roses. The base is a conventionalized arrangement of rose branches and buds, with the inscription wrought from the falling petals which have drifted downward from a mass of blossoms in the maiden's arms. The figure is treated classically and is full of serene grace and thoughtful innocence. 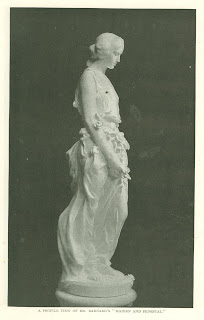