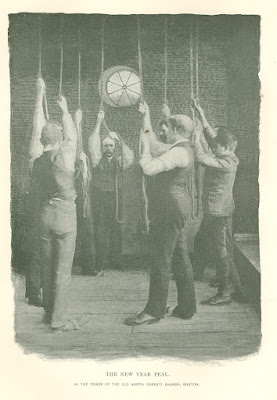 The nineteenth of April, 1894, sixty years after they were pealed for the last time in honor of the visit of the Mar­quis de Lafay­ette to the coun­try he had helped to make free, heard the bells of Christ Church, re-hung and restored to their old condition of prece­dence above all the bells of the re­public, pealed after that fashion for which they were cast one hundred and fifty years ago.
This is more than an episode, - it is an historical event, it may be an artistic epoch; for on that day a distinct art, lost for a century so far as the United States was concerned, came again into existence. The movement so generated is spreading rapidly, and in the course of time it may be that not only will the noble art of bell ringing take its place once more in this country as an adjunct of Christian worship, but something may be relearned of that lost art, lost in a measure in England as well as in Amer­ica, the very noble art of bell casting.

It may seem to some unjustifiable to speak in this fashion, to some who call to mind the thousands of bells that yearly are hung in church towers, who remember the scores of churches where "chimes" are rung weekly or daily; but one can, nevertheless, say without fear of contra­diction that bell casting is in many re­spects a lost art, and that scientific bell ­ringing in the United States is a lost art as well.
The bells of Christ Church, as they were found last year, prove this beyond a doubt, if proof were needed. Here was a ring of bells, the first cast for North America, the most perfect from a campanological standpoint, so hung that they could not be rung, and insulted by being employed merely in a system of chiming, which is to true bell ringing what a child's drumming on a pianoforte is to the art of a Paderewski. And in all the United States there was no chime of bells that could approach this in the point of small variations in weight, in homogeneity of metal, in carrying quality or in musi­cal tone; neither was there a single ring of bells properly hung and properly rung on the entire continent.
The art of campanology is delicate, in­tricate and subtle. It begins with the first steps toward the casting of a bell, it considers every detail of its contour, its weight, the thickness of its parts, its composition, every detail of its hanging and adjusting, every detail of its ringing. Many of the secrets of the art are still preserved by the bell ringing guilds in England, but certain processes which deal with the creation of the bell itself are absolutely lost. For example, one of the most important factors in the creation of a perfect peal is the point of the difference in weight between the tenor, or heaviest bell, and the treble, or lightest, in the octave of a diatonic scale. In the Christ Church peal the tenor bell is but two and a half times the weight of the treble; but modern founders of the highest repute, both in England and Belgium, have adopted in their peals a scale in which the tenor bell weighs at least three and one half times as much as the treble bell. The nearest approach to old results that has yet been achieved in this country is a chime in which the proportion is four to one, while ordinary combinations of bells often reach the extraordinary conditions which exist at Christ Church, Cambridge, where the heaviest bell in the oc­tave weighs eight times as much as the lightest. Such an arrangement, if by courtesy called a peal, is a combination which no ringer would venture to handle, for with so marked a contrast in the weight of the respective bells, the tintinnabula at one end of the octave would be completely over­powered by the deeper vibrations of the heavy bells; whereas there is no perceptible differ­ence in the carrying power of the different bells of this ancient Boston peal, even when heard at a dis­tance of four miles. 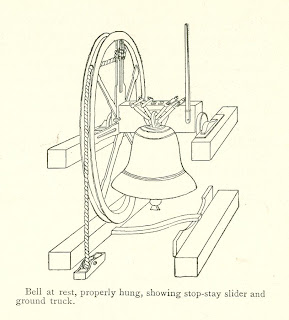 The same unfortunate retrogression shows itself in every direction. By abandoning the ancient system of ring­ing for the makeshift of chiming, the no­ble art dropped nearly to the level of a trick, and the craft of bell-casting be­came a trade. Everything was sacrificed in the making of the bell to cheapness; in the hanging of the bell to the capa­city of a blundering sexton; and where once we had great bells leaping through the sonorous air, pouring their tone toward each other from resounding throats and driving it for many miles, where once we had loving ringers, each knowing his bell, each knowing its exact position in its swift revolution at any second to an eighth of an inch, -we now have to endure ill-assorted masses of dull clanging metal swung by ignorant and careless sextons, or hammered by some mechanical makeshift. It is not too much to say, therefore, that campa­nology was, so far as this country is con­cerned, really a lost art in all its branches.
Indeed, so absolutely had its first prin­ciples fallen out of sight that certain abom­inable imitations which, it was claimed, were just as good as bells, and less ex­pensive, have been accepted by the pub­lic with a serene ignorance of their abso­lute wretchedness. Fortunately the most loudly heralded form of these abomina­tions misnamed "tubular bells" has pre­cisely the least sonorousness and penetrat­ing power, so that its steely and dissonant clangor can hardly be heard beyond the block in which it may be placed. One of these bogus "chimes" ("horresco re­ferens") has been recently hung in a church in this vicinity, but fortunately is almost inaudible. Christ Church peal cannot but act as a great object lesson in future; for a comparison of the harsh screaming of the modern substitute with its own mellow song will show very quickly that a steel tube is not a bell, not even a substitute therefore, but simply a grotesque absurdity, to be compared only to an African tom-tom. 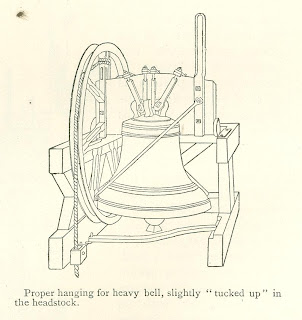 Another evidence of the desuetude of the art is shown in the history of the so­ called Columbian bell. Apart from the wicked vandalism which the scheme of this bell involved - the childish destruc­tion of the hundreds of precious and his­toric heirlooms - the alleged method of constructing the bell proved the dead­ness of the art; for into its composition went all manner of heterogeneous ele­ments, metals of every kind, including much silver, if the statements of the pro­jectors of this scheme are to be credited. Now, anyone familiar with ancient bell ­making would have predicted the result of such an amalgam, which was absolute failure. The claim had been made that the silver would improve the tone of the bell, though in a pamphlet printed in 1877 the Meneely founders of Troy had ex­pressly stated that it was a fact that silver added to the amalgam of copper and tin would ruin the ringing qualities of a bell. The false representations made in connection with the absurd Columbian bell scheme led scores of misguided and foolish people to sacrifice their silver and relics. Of course the first bell was a lamentable and utter failure, and another had to be made, from which the sacrificed silver was discreetly eliminated, and though this bell appeared at Chicago to­ward the close of the Fair it was not thought worthy of being assigned a place, and was left upon the ground in the rear of the Administration Building, and when occasionally tolled, its dissonant chords, which could be heard but a short distance away, were even less musical than those of some steel bells exhibited by a Prussian founder. It would be interesting to fol­low the subsequent history of two thou­sand pounds of metal obtained from the wanton destruction of valuable relics, and also of the unfortunate bell itself.
These instances seem to show how the once noble art has ceased to exist, and to indicate as well how great a destiny may be the fortune of Christ Church peal. Properly hung, properly rung, it may bring a recrudescence of a beautiful art. Once more church towers may have a reason for existing, and may contain in their tops, in place of misbegotten and ill assorted bells ranging from "Big Bens" to schoolhouse gongs, perfect and har­monious peals, swinging exultingly on every festive occasion, appealing to culti­vated and refined ears, not tolling dis­sonantly or chiming trivially, "to make the judicious grieve." 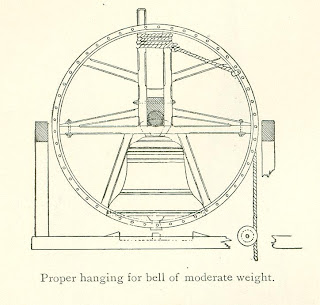 Now just a word about tolling and ring­ing. In ringing of course the bell is first raised and balanced with its mouth up­ward, and held ready for the signal to swing off and strike. When the bell is released it falls, the tongue tapping the sound bow on the upper side toward the end of its revolution, and pouring the waves of sound outward, perhaps into the waves of the bell swinging opposite, so that perfect harmony may result from this blending. In tolling, the bell rests rigid, with mouth downward, the tongue being beaten against the sound bow. The sound thus emitted is dull and muffled, and being necessarily driven downward it carries but a short distance. To obtain good effect, then, the bell must be swung, and this requires competent ringers. Now, as it takes some two years for a man to become a proficient bell ringer, it may seem that it must be some time before ringing can become popular or common. Perhaps, but already in Boston the Old Colony Guild of Bell Ringers has been formed with a dozen active members, formerly members of ancient English guilds. From this guild men will be as­signed to such neighboring parishes as may need their services; and so fascinat­ing an art as this cannot fail to draw novices anxious to become proficient masters in this manly recreation tending to the development not only of the phys­ical powers but also of the intellectual faculties. One by one, peals will be hung and manned; and in time, it may be, no state will be without its ringing guild.
Returning now to "the Boston Bells," Christ Church peal, it may do no harm to repeat its history, although now it is gen­erally well known. In the year 1743 a subscription was taken up in England to purchase a peal of bells for the mission in North America, and the commission for casting was given to Abel Rudhall of Gloucester, one of the most famous bell­ founders of England, the representative of a house that had existed for many genera­tions. In 1744 the bells were hung in Christ Church tower, where they were pealed regularly for thirty years. Cer­tain political events with which we are familiar made it expedient for a large part of the parish to transfer its residence to Halifax; and after the close of the war the bells fell into disuse. In 1810 an apparatus for chiming was added, and the decadence began. In 1824 the cage was renewed, and an attempt was made to ring the bells from the lower chamber; but this was a complete failure, and from this moment the bells were used as gongs, that is, they were tapped by their tongues being used as hammers. Certain conditions prove this beyond a doubt. For example, the cage of one of the bells was so narrow that the bell could not possibly revolve in it, and again, the tongues and brims of the bells were al­most unworn. 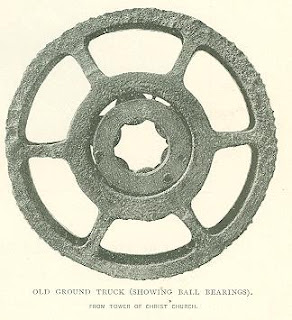