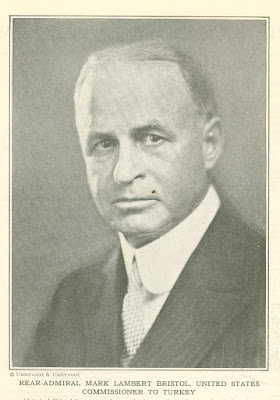 Admiral Bristol is now on leave of absence from Constantinople, but is using his visit here to promote the work for progress and harmony in Turkey and the Near East that he has been carrying on with such conspicuous success since he was appointed High Commissioner in August, 1919. His influence during these years has been greater than that of any other person from the outside world having official relations with the new Turkish Republic. Combining the functions of American Admiral in Mediterranean waters with those of Ambassador, his opportunities have been exceptional, and his personal qualities are in every way equal to the range of his opportunities. He has been of the utmost aid to the Near East Relief, Red Cross, and other agencies of helpfulness, and he has been a constant adviser of those who are carrying on the enlarged educational work of the American colleges at Constantinople and elsewhere in Turkey and the East. Admiral Bristol was a young officer on board the battleship Texas in the naval fight that destroyed the Spanish fleet at Santiago, and twenty years later he was commanding the battleship Oklahoma in the North Sea at the height of the World War. In technical naval work he had been one of the men connected with the development of gunnery, torpedoes, and aircraft. His service of thirty-eight years since his graduation at the Naval Academy have afforded him experience in every part of the world.