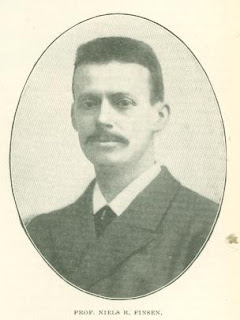 Some six years ago the medical world watched with considerable curiosity the experiments of a young Danish physician, whose theories anent a "light cure" held out great promises. Since then the experimental stages have broad­ened until they include the realm of practicability. Today no name in the scientific catalogue is better known than that of Prof. Niels R. Finsen, of Copenhagen. Since the discoveries of Pas­teur, the Roentgen rays are, perhaps, the most wonderful addenda to the history of medicine. But while the latter may be termed the search lights of the modern surgeon and his class, in the particular field he has selected Professor Finsen stands absolutely alone.
The aim of Professor Finsen and the Finsen Medical Light Institute is the conquest of superficially seated consumption and cancer through the medium of both natural and artificial light. Many skin diseases yield to the methods em­ployed by the eminent discoverer. From a purely aesthetic standpoint, therefore, the light cure be­comes a distinct boon to mankind. 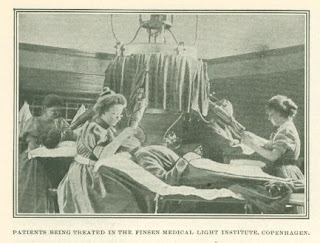 His researches and methods have opened up a territory almost unknown until Professor Finsen led the way, not ten years ago. Professor Wid­mark, of Stockholm, it is true, was the first to prove conclusively that sunburn is caused, not by heat rays, but through certain chemical rays contained in the light. Finsen himself does not hesitate to admit the validity of the other's prior­ity. But still to the Danish physician is due the knowledge that such and such rays in the sun's spectrum are bacteria-destroying, while others are of a healing and curative nature.
Working on this principle, bringing to his aid the electric current, experimenting constantly, ill, yet subjecting himself to personal tests in order to be certain, Professor Finsen stood ready finally to let others judge him by his perform­ances. The highest medical authorities in Europe and the United States have visited the Finsen Medical Light Institute at Copenhagen, and as a result of their approval almost every large city in the world is making ready to establish a plant for the treatment of such diseases as yield to the Finsen concentrated light.
With this much understood, the readers of the REVIEW OF REVIEWS will have little difficulty in following the writer on his tour of investigation of the Finsen Medical Light Institute in the capital city of Denmark. It is the purpose here to explain succinctly, yet without omission, what Professor Finsen himself told on that visit to the famous institution. Fortunately for the better understanding of things in general, the day is fast disappearing when men of medicine and science hold secret the knowledge which is the concern of all.
The new buildings of the Finsen Medical Light Institute are excellently suited for both research and clinical purposes. Located in Rosenvaenget, a handsome suburban district of Copenhagen, the electric street car service makes the institute easily available. No better evidence is needed as regards the rapid growth of the institution than the difference between the present spacious quar­ters and the low, almost barn like, structure occu­pied as recently as a year ago. Professor Finsen holds in no slight esteem the building where for five years he carried on his epoch making investi­gations in the realm of bacteriology and of light treatment. To him the grand and larger com­plex is but another phase in the gradual advance; the ever widening field where future problems can be met squarely with all the new methods that science can supply. 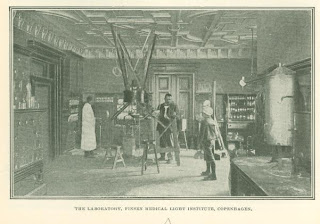