By M. Dinorben Griffith.
All about a little island "monarchy" in Cardigan Bay, which in olden times was one huge cemetery. It is the private property of a member of the aristocracy, but has a crowned King of its own. 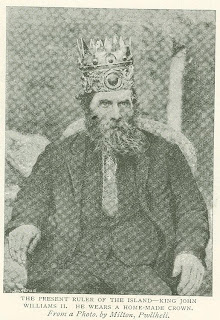 The travel epidemic has raged so fiercely of late years that it is difficult to imagine there can be an unexplored nook in the whole of Europe, or one spot untraversed by the foot of the ubiquitous tourist. Yet, within the boundaries of Great Britain, there exists a small island-ancient, historic, and of unique interest, though a terra incognita to a large majority.
As early as the fifth century this island was a prosperous little kingdom, with a noble abbey and saintly brotherhood, who, according to tradition and existing documents, were granted by God the privilege of dying according to seniority. It was also the Mecca of religious England, and, finally, it became an Island of the Dead.
Our little kingdom is a sea-girt rock, to which, for centuries, every barge and shallop brought corpses in place of living emigrants, and every turn of the spade gave evidence of mortality. Today the island is a tiny Arcadic kingdom, where the monarch and his subjects live in true patriarchal simplicity. To them the sea presents fish of many kinds; while the thin soil covering the grave tunneled rocks yields an abundant harvest of unrivalled wheat, barley, and potatoes. 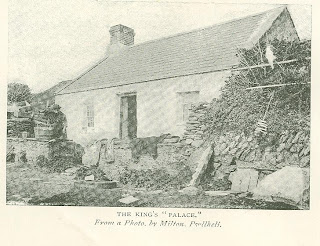 The truth of these strange sounding statements may be proved by a journey to Bardsey, an island three leagues from the mainland, at the northern extremity of Cardigan Bay; but the latter part of the journey will not be found easy to accomplish. Reaching the little, out-of-the­ world village of Aberdaron, the island may be seen in the distance. On two occasions I reached Aberdaron, but failed to get to the island, for the passage, although only four miles across, is dangerous, and often impossible, by reason of adverse winds and a tide that runs at the rate of seven miles an hour. But I com­forted myself by walking along the shore, where, under my feet, lay the skeletons of many who had failed to reach the sacred isle, and had been reverently buried, their faces towards the wished for goal. The sacredness of Bardsey, by the way, and the difficulties of the journey may be estimated from the old saying: "Twice to Bardsey, once to Rome, or never to Heaven."
After many delays we secured a passage in a fishing boat for a sovereign, which is the lowest fare across the sound to Ynys Enlli, or Isle of the Current, as it is termed by the natives. Every moment the boat seemed destined to be sucked under by the hungry current; and as we dodged the flying spray and cowered under our mackintoshes, we wondered if the reason that more dead than living had gone to Bardsey was totally unconnected with the discomfort of the trip. 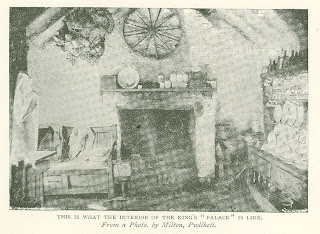 From our port of departure Bardsey looked like a barren rock tapering into a narrow head­land at the southern end. But on near approach the rock develops into a fairly lofty mountain, bristling seaward with overhanging crags, under the shadow of which our smack passed, before reaching a peaceful, sandy creek, sheltered by low rocks and forming a safe harbor for vessels of not more than forty tons.
Here we disembarked, with the aid of some of the islanders, headed by their present "monarch," King John Williams the Second, under whose guidance we proceeded to explore the island. Bardsey's present is peculiar, and, in some particulars, unique; but the little island's past is so weird, not to say sensational, that the present is tame by comparison.
The whole island is a graveyard, tunneled everywhere into shallow trenches a little more than 2ft. deep, and about the same in width. In these the un-coffined bodies were laid in lines, head to feet, the top of the trenches being covered with rough slabs of stone, over which earth was laid. The King informed us that many of these rude tombs had been laid bare when the foundations of the new farmsteads, built by Lord Newborough, were being dug. "I have seen barrows full of bones taken up," he added; "and we buried them up there," pointing to the old monastery. 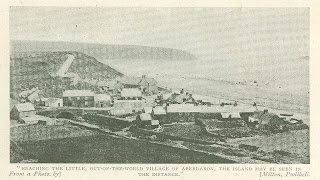