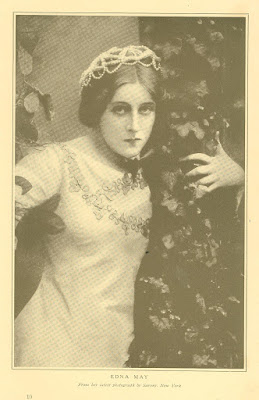 More remarkable, perhaps, than the life story of any other player now before the public is the career of Edna May Pettie, the daughter of a Syracuse letter carrier. Her stage name is doubtless known to every newspaper reader in England and America. Not gifted with unusual talent, by real cleverness in ma­king the most of herself this pretty girl from central New York has found the center of the lime-light that shines upon the English speaking stage.
The keynote of Edna May's popular­ity is brought out in a statement made by Manager George W. Lederer, as long ago as 1900, when, after her pronounced hit with "The Belle of New York," in London, he said to a newspaper man: "What I like about her is that, notwithstanding her extraordinary success, she is still the same simple, modest little woman that she was on her first stellar appear­ance in New York. She has none of the 'big head' so prevalent among ac­tors. Her success in society abroad - she has sung at any number of drawingroom entertainments - is due to the fact that she has the happy faculty of being able to look wise and say little. She can say 'yes' and 'no' in a prettier and more fetching way, and she can say it oftener too, than anyone else I have ever met."
Although Mr. Lederer claims to have "discovered" Edna May, it was Oscar Hammerstein who gave her her first po­sition. That was in the autumn of 1896, when he was rehearsing "Santa Maria," a light opera for which he himself wrote both the words and the music. The piece was put on in the theater part of Olym­pia, as it was then called - the Criterion Theater, as it is now. This girl from Syracuse simply walked into Mr. Ham­merstein's office One morning and in­quired if he had an opening for her in the chorus. She told him that she was a soprano, but after he had tried her voice she agreed to be set down as a contralto. At any rate, he engaged her, and as she showed a laudable desire to take things seriously and to work hard, Mr. Hammerstein made her understudy to Lucille Saunders. More, he even wrote in a trio for her, Marie Halton, and Eleanor Elton.
During this first winter in town, Miss May did more than get a start on the stage; she fell in love, and before spring was married to Fred Titus, the crack bicycle-rider. When it came time to take "Santa Maria" on the road, she did not wish to leave her husband - as it happens, they have since been divorced - so she and Mr. Hammerstein parted company, and, after some skirmishing around, Edna May Pettie, as she was then called on the program, found a tiny part in " A Con­tented Woman," which the late Caroline Miskel was playing at the Madison Square Theater. Now, it chanced that Mr. Titus's sister, Sylvia Thorne, was in the chorus at the Casino, and she sug­gested that her sister-in-law try to get in there, where shows were likely to run through the summer. She spoke to her manager, Mr. Lederer, about the matter, and his reply was: "Send her along, and I'll take a look at her."