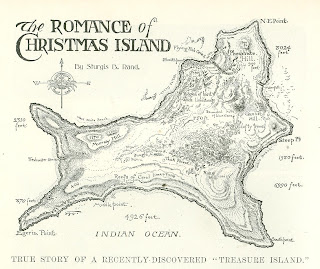 Nothing so enthralls the im­agination, especially the fresh imagination of a boy, as the thought of an island set far out in the lonely waste of a southern sea. Palms rise first from over the horizon's edge; then the long, low beaches of sand appear, with the surf thundering upon them; the sea-birds clatter at the strange sight of a sail; perhaps the black, sprawling ribs of some ancient wreck rise above the smothering sand, and beyond that, leading down from the tufted palms, are the footprints of a savage. Who knows what pirates have ca­reened their ships in that half-hidden har­bor, or what rough men, bearded, heads bound with red kerchiefs, pistols in sash, have there been marooned, and have stood gazing out to sea for a sail. A far-sea island is the open door to all romance. How well Robert Louis Stevenson, who was always a boy in imagination and all too briefly a man in years, knew that door. How he loved a sea island! And where is the boy who would not give his birthright to have been on the "Hispaniola" when she first sighted" Treas­ure Island"!And what is the charm of "Robinson Crusoe" and "Swiss Family Rob­inson" and" Sind bad the Sailor," of Poe at his best, and Marryat and Cooper, and all those other robust story-tellers who have made life worth living-what but a sea island!
And yet not one of these giants among writers has ever, in all the ocean of imagi­nation, sighted an island more strangely wonderful than that the true story of which I shall set down in this place. For Christ­mas Island is remarkable in ways that the story-teller never dreamed of.  It is an island of modern romance - the kind of romance which will absorb the interest of the boy of half a century hence. No pirates ever landed on the shore of Christmas Island, for its shores are too rough and forbidding to tempt even a hardy sailor; no barefooted savage ever left a footprint on its beaches, for until a few years ago no human voice was ever heard among its higher hills; no sailors were ever there marooned, nor gold buried. 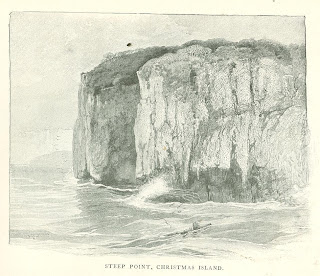 Vessels bound down through the Straits of Sunda, making for the Cocos or Keeling Islands, the pearl fisheries of West Austra­lia, or some other far place, sometimes, on the second day out, sight a patch of green rising above the horizon on the port side; and, seeing it, they sail no nearer. But vessels bound up are often borne much nearer by the trades, so that they can make out the full extent of the land - a high shouldered, green mantled island, fringed about with a white collar of surf plunging against its precipitous sides. It is about nine miles long, with a hill at each end, and a gently sloping plateau between. If the skipper has been long at sea, he knows when he sees this island, that he is just 220 miles due south of the western tip of Java, which is the nearest land, and 900 miles from Australia; and though he need water and food, he is wary about attempting to land on its in­hospitable coast.
And so vessels have been passing up and down the Indian Ocean and sighting Christ­mas Island for more than three hundred years, yet knowing little or nothing about it. On a curious old Dutch chart, made by one Pieter Goos in 1666, it is given the name Moni. In 1688 that bold old seaman, Dam­pier, blundered upon this patch of green while trying to make the Cocos or Keeling Islands. He needed a pump, as he writes quaintly, and it being a calm day, he suc­ceeded in getting a boat ashore, where his carpenter cut a tree. The men brought back a load of boobies, frigate birds, and land­ crabs. The crabs evidently pleased the hungry crew, for Dampier says, "They were very good sweet meat, and so large that two of them were more than a man could eat, being almost as thick as one's leg."
After that, about once in a hundred years, some captain mentioned the island in his re­ports. One sailed entirely around it, search­ing for an anchorage and finding none; an­other landed a party, perilously enough, with the intention of reaching the summit of one of the hills, but the high cliffs and the dense tropical growths turned him back. As there were no evidences of natives who might buy gew-gaws, nor of valuable vegetable or mineral products, the island was left in the mist of obscurity. Even those great island hunters, the Dutch, never thought it worthwhile to raise a flag upon it; for how could they know its value? Thus time reached the latter half of the nine­teenth century, and the only thing this grim spot in the Indian Ocean had earned was a name, Christmas Island, the very origin of which is lost in the lore of ancient log-books. Then came scientists, dropping leads into the sea - idly, the practical man thought - to see how deep the water was, and they learned the first curious thing about Christmas Island. They found that the shore of the island was in fact the side of an enormous submarine mountain; that when they let their lines down, even near land, there was "no bottom," so far as ordinary soundings were concerned; and that two miles away the water had a depth of over 6,000 feet, or nearly one and a fifth miles. But even that was not the base of this huge mountain. To the north lay the awful sea valley known as Maclear Deep, nearly four miles below the summit of Christmas Island; and to the south was that other valley, Wharton Deep, with a depth nearly as great. Should the water be suddenly swept from the Indian Ocean, Christmas Island would loom up from the sea bottom around it higher by far than any mountain known to man. And on all sides its peak would be unscalably steep.
All of this evidence of a great new sea mountain came to the hands of the British scientists who made the famous expedition in the "Challenger," and the chief of these was Sir John Murray of Edinburgh, Scot­land. 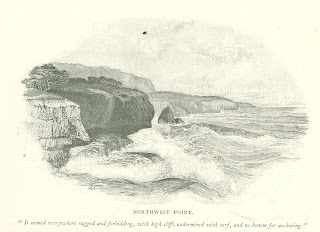 Judging from all obtainable reports, Sir John concluded that this mountain of the sea had once been entirely submerged; that, vast as it was, it had been heaved upward several times until over 1,000 feet of its bulk reached out above the water; and that, while submerged, coral animals and plants had built upon it and covered most of its peak with their skeletons. Here was a good opportunity for studying a unique coral island; and Murray, as well as other British geographers, were anxious to take advantage of it. Accordingly the surveying ship, "Flying Fish," Captain Maclear, which was about to make a voyage in the Indian Ocean, was ordered by the Admiralty to visit Christmas Island. In December, 1886, Captain Maclear first sighted the island from the north. It seemed everywhere rugged and forbidding, with high cliffs un­dermined with surf, and no bottom for anchoring; but after sailing and sounding entirely around the island, he discovered a small bay with a bit of white beach, to which he gave the name "Flying-Fish Cove." There, by letting his anchor down deep and tying to a tree on the land, he secured his vessel, and sent a party ashore. And then he learned another strange thing concerning the island. All about it swarmed multitudes of birds, some of the sea and some of the land; and so unaccustomed were they to the presence of man that they flew about the heads of the sailors and allowed themselves to be picked from the ground or the trees like pet chickens. If a sailor wanted a good dinner, he had only to wave his red handkerchief and shout, and all the birds of the air flew about him clamoring, and he took his choice. Maclear's men pene­trated a little distance into the jungle which everywhere clothes the island with tropical green, and to their surprise they found everything overrun with robber-crabs and huge rats of an unknown species - ­rats so fearless that they ran over the ex­plorers' feet as they advanced. There were also large fur-coated bats flitting about in the shadows of the forest and making a great noise. A splendid large fruit-pigeon as abundant, and could be taken with the hand from the trees. Everywhere stretched the virgin forest, never before entered by man. Indeed, as science has concluded, this is one of the few instances, if not the only instance, of a tropical island of any large ex­tent which had never known man's hand, and it was therefore of supreme interest. There was virgin territory in which life had de­veloped, knowing nothing of the influence of that great changer and developer, humanity. How did it become peopled with animals and plants? And what would be the effect if man should introduce the dog, or the cat, or come to live there himself? 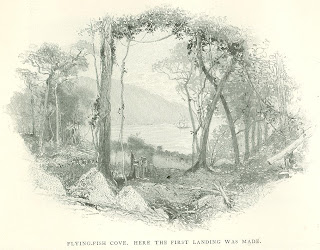