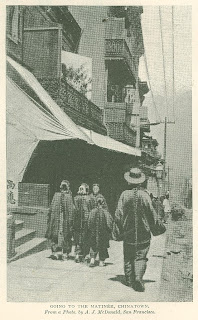 In the bonanza days of Cali­fornia there were several Chinese theatres in San Fran­cisco, but the keen competi­tion among them for Mon­golian patronage gradually crushed all but two of them out of existence. Then a large new playhouse was built, and a company of actors of high reputation imported from Pekin. The success of this venture was so great, that one of the old theatres was closed and the other nearly ruined.
At the present day the popula­tion of China­town, San Fran­cisco, is estimated at 40,000, whose amusement is catered to by two theatres, the Tan Kwai Yuen on Washington Street, and the Po Ring on Jackson Street. As long as Chinamen were freely admitted to the United States, the Chinese thea­ters did an excel­lent business, but since the passing of the Exclusion Act, their reve­nues have been much diminished.
An annual festival is held in these theatres in commemoration of Tin, Tau, and Chung, the foun­ders of the Chi­nese drama. The two first were joint authors of dramas, and the last devised the musical and acrobatic details which form so important a part of Chinese plays. The festival lasts three days, during which special performances are given, each founder getting one-third of each day devoted to his honor. In the early days of the Chinese drama the players were amateurs, the sons of nobles, and were called mandarin actors. There was no professional class of actors regularly trained for the stage. 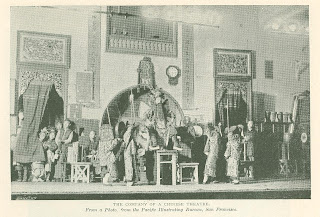 Dr. Frederick J. Masters, for many years a missionary in China, says that the Chinese drama took its present form during the Tang Dynasty (618-915 A.D.), and reached its highest excellence during the Yuen Dynasty (1280-1368 A.D.). During the period of its greatest glory there were eighty­-five dramatists and nearly five hundred plays. Public represen­tations were not, however, given until the year 1730, at which date the finest theatre for pro­fessional actors was opened in Pekin, in accord­ance with a dream of the Emperor. The purpose of the Emperor was to exercise a wholesome and purifying influence on public morality, and to set a good tone to society. To this end the plays always dealt out poetic justice, the villains being foiled and crushed, and the good and virtuous characters richly rewarded. But, like the modern theatre in Europe and America, the Chinese drama has fallen considerably from its high moral purpose, and now its influence serves rather to debase than to refine and elevate its patrons.
As a result of this decadence the Chinese text books of ethics denounce the theatre as the enemy of all high morality, and prohibit the actor from entering the district or pro­vincial examinations for a literary degree, no matter how high may be his capacity and attainments. The masterpiece of Chinese dramatic literature is a domestic drama entitled "The Story of the Lute." Modern Chinese dramas are chiefly comedies, with a strong farcical element and a copious use of the slangy phrases of the day. Many of the worst are full of coarse puns and doubles entendres, though those who are able to understand and. appreciate the words of a Chinese play say that even these do not touch the depths of coarseness and vulgarity that are reached by the farce-comedie's of the United States. All the productions of the Chinese theatre show how great is the respect felt in China for the Imperial authority and for high scholarship. A large proportion of Chinese plays represent some portion of the national history; these are very long, the performance of some of them being said to take a whole week. Hence an idea has gone abroad that all Chinese plays are interminable; but this is not really the case, many of the pieces intended for the professional stage not occupying more than one hour, the time taken by one of the best plays in the Chinese language, "The Chancellor of the Six Kingdoms." This describes a career which never fails to touch the Chinese heart - that of a poor scholar who rises to great power by his energy and talents. It is a very short piece, crowded with processions of warriors, statesmen, and courtiers, and, to the Occidental spectator, soon becomes monotonous and wearisome. 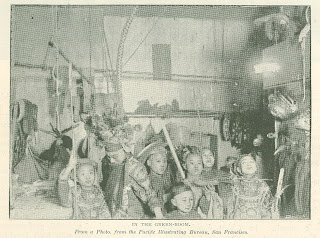 Originally all the plays on the Chinese stage were historical, but now they are divided into seven classes: historical or tragic plays; comedies; dramas of Platonic love; dramas of Court life; dramas of chivalry; dramas of persecution; dramas of rewarded merit.
The melodrama in which the poor boy of merit and character earns great wealth and achieves high station is, as might be expected among an oppressed people, very popular. The cruelties, oppressions, and exactions of the ruling class furnish a fertile source of topics for Chinese plays. They supply the ground work of the persecution plays, the denouements of which, though probably very unlike what happens in real life, fill the listeners with delight.
In the plays of rewarded merit, the poor man of humble birth attains high rank and position. In fact, this class of plays bears a very close resemblance to the sort of melo­drama popular at the theatres in the poor quarters of London, except that the Surrey play is compounded of the plots of three classes of Chinese plays: the persecution or virtue-in-distress play; the chivalry play; and the merit rewarded play. The con­ventional hero of the chivalry play is always a painted face military character, continually engaged in deeds of Quixotic benevolence. His haste and impulsiveness are perpetually running him into danger, but at last victory crowns his efforts. 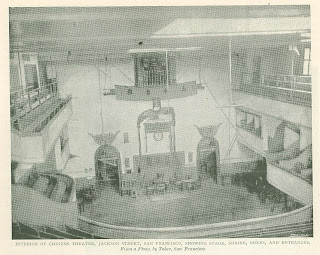 The drama of Platonic love is peculiar to China, and is quite unlike the melodramas of the English or American stage - the un­likeness being chiefly produced by the different social usages of China, where a man may not make love to an unmarried woman, and flirtation between young men and maidens is an undiscovered sport. Inasmuch as Chinese plays cannot draw upon love for their interest, Chinese dramatists have to rely mainly upon strong character drawing and ingenuity in the con­struction of plot.
The three men upon whom the manage­ment of a Chinese theatre rests are the costume man, the boarding house keeper, and the treasurer. The costumes are very costly and handsome, being made of silk and satin, embroidered with silk and threads of silver and gold. The boarding house keeper feeds and lodges the actors; the treasurer controls the finances. There is no stage­ manager, the drama­tist himself usually superintending the rehearsals. The cast is posted up in the green room; the cues and important lines are written out; the dialogues being made up on the spur of the moment by the actors, who merely follow the general outline of the drama.
To do this satisfac­torily, they must be men of quick wit and good education, familiar with the his­tory of their own country, and having a lair idea of the etiquette of the Imperial Court. So. skilful do the actors become in im­provising lines to suit the action of the piece, that the per­formance of the play proceeds as naturally as though all the speeches had been com­mitted to memory. The Chinese theatrical year begins on May 25th, the troupe being re-organized annually. The details of re­-organization are discussed at a dinner at­tended by all the members of the company. After being closed for three days, the theatre is re-opened with a grand performance. 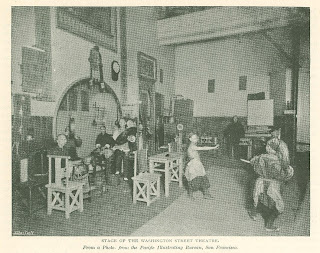 The salary of a Chinese actor varies from $200 to $10,000 a year, the latter being the salary paid in 1882 to the leading im­personator of female roles in San Francisco. But to earn this handsome pay he had to play seven times a week, and from six to eight hours at each performance. When he played, the price of admission to the theatre was raised to a dollar a head. He is now the leading actor of Canton.
Another actor; a comedian, was paid about $1600 for a three months engagement at Portland, Oregon, where there is a large Chinese population. The leading tragedian in San Francisco received $8,000 a year. But these salaries were paid in the good times, before the Chinese Exclusion Act was passed, when, the Chinese merchants were making fortunes and were liberal patrons of the theatre. Then the pro­prietor of the theatre used to hire the players at fixed salaries; now he merely rents the house, the furniture, and the ward­robe to a company, who pay their own expenses out of the receipts, and divide the surplus pro rata.
But, notwithstanding his large earnings, an actor is in the lowest caste in China, and can never attain any social recognition, no matter how brilliant or agreeable he may be. No one invites the actor to his house, or even acknowledges his acquaintance when he meets him in the streets. Neither he, nor his sons or grandsons, can hold any official rank or any post under the Government. Belonging to a proscribed class, they are deprived of the ordinary motives to accumulate money and earn an independence. Thus, despite their large salaries, they are constantly in debt, being improvident and extravagant. Many actors of high merit having been compelled to leave China because of their debts, it has happened that the best Chinese actors could be seen in the theatres of San Francisco. Often an actor who has taken first parts in China plays second parts in San Francisco, where salaries are larger; for in China most actors belong to strolling companies, which depend, for the most part, upon a rich noble, who has the play performed before him.
It is easy for a regular theatre-goer to know the merits of the play that he is going to witness; for a dramatic list published in China gives the names and the chief performances of all the leading players in the Canton district, so that a company which does not reckon among its number some players of established reputation attracts but a small house. Benefit nights draw the largest crowds. Not infrequently one of the Chinese secret societies in San Francisco hires a theatre, paying $150 or $200 for a night. The president of the society takes the house, charges such prices as he thinks fit, and puts in his own ticket takers. On a night of this sort the tutelary god of the society is carried to the theatre in state, with a noisy accompaniment of clangorous gongs and whizzing fire crackers. If the night happens to be a cold one, the Joss is kept warm by being wrapped in a thick coat. The Chinese believe that their gods and goddesses take much pleasure in theatrical performances; and when the inhabitants of a village or town have escaped from fire, flood, or pesti­lence, they often make arrangements with a company of actors for a theatrical perform­ance for the benefit of their gods. 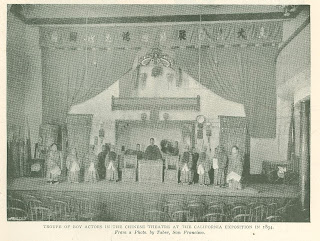