By Mrs. Herbert Vivian
It was the idea of Signor BacelIi, the Italian Minister for Public Instruction who, seeing the growing bareness of the country and the rapid depletion of the few remaining forests, conceived the idea of instituting periodical festivals on which school boys and girls might plant trees for the benefit of the next generation. The scientific and other values of this act were pointed out to the young people, and the fete was graced with the presence of Queen Margherita. 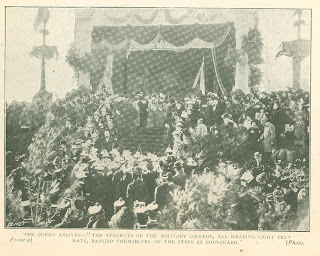 It is a sad fact that poor Italy, once so rich in glorious forests and green woods, has been losing them rapidly, and that, owing to a reckless and indiscriminate use of the hatchet, the whole land is becoming desolate and denuded. This state of things affects not only her beauty, but also her prosperity, for wood is much used for fuel, and it is now becoming ominously dear. This has been taken to heart by many patriotic Italians, and Signor Baclli, the fertile-minded Minister for Public Instruc­tion, recently inaugurated a popular festival, which bids fair to cover the Alps and Apennines once more with green before we are halfway through the next century.
The idea of the Festa degli Alben; or Festival of the Trees, is not wholly original, for it was suggested by the American Arbor Day, which was started in the United States by the economist Sterl­ing in 1872. He was struck by the bareness and barren­ness of the State of Nebraska, and felt that the violence of the winds and the bitter cold of winter would be much modified by the protecting in­fluence of trees. He therefore proposed to dedicate one day in the year to planting a certain number of those trees which would be most likely to thrive in the region selected.
The notion was favorably received; but, first of all, the function was carried out simply without any elaborate festivities. Sud­denly, however, the idea "caught on," especi­ally among the young people, who became wild to plant as many trees as possible within the year and outdo their neighbors. Thus one by one the other States, with a few exceptions, adopted the fete and took it to their hearts. According to recent statistics, the enormous number of 335,000,000 trees has been planted in Nebraska alone during the past twenty-five years.
France and Switzerland have since taken up this charming and useful idea. In Geneva, too, there is a flourishing society for the preservation of Alpine trees. and plants, and in France the Amis des Arbres number. many thousands amongst their ranks. Then, of course, Japan, who is never behind the times, has also intro­duced a somewhat similar institution.
However, it is in Italy that the ceremony appeals most to us, for the Italians have a delightful way of imparting picturesqueness even to the most ordinary occasions. Besides which, there is in scarcely any other land a spot of such deep interest as the Roman Via Latina, where the tree-planting ceremony took place. 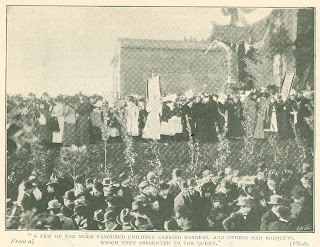 The Romans themselves have an inherent love of trees, which is probably a reminiscence of their ancestors' worship of the sacred groves. In the old days pine trees were sacred to Cybele, the mother of the gods, and on a certain day in the spring. time a pine tree was brought by her priests to the city and carried in solemn procession to the temple of the goddess on the Palatine, where it was offered to her: Some trees were considered benefactors to mankind, whilst others were supposed to be malevolent; but both had to be propitiated. Each tree, too, had its power of heal­ing some special malady. When the wind soughed in the branches our fore­fathers fancied they could hear the voices of the dryads foretelling to them the future.
Though Signor Bacelli does not advocate a return to the days of tree worship, he yet deems it a pity that reverence for the grand old forests should have died out in Italy. Therefore he deter­mined to instill into the minds of young Italy a proper respect and love for them. He wrote to all the heads of Government schools, in every part of the land, asking them to do their best to help him, and proposing to institute a Tree Day. He begged them to teach their pupils that the woods are public benefactors. They mean health and riches to the nation; they equalize the temperature; attract the moisture from the clouds; direct the air currents aright; keep off the violence of the. winds, and act as defences against endless ills in a way seldom thought of by the average person.
The notion of Tree Day was received with the greatest enthusiasm in Rome and the provinces. No fewer than 177 towns set to work to make it a success. The Queen herself took a personal interest in the new idea, and consented to preside over the ceremony in the Via Latina. The place chosen on that famous road was about four kilometers out of Rome, in one of the most interesting parts of the Campagna. Hard by are the Appian Way and the great tomb of Cecilia Metella. Behind in the distance are the beautiful Apen­nines and Sabine Hills, with Fras­cati, Tivoli, and Soracte. Then on either side of the road stand the wonderful old tombs of the Roman patricians.
On November 2tst 8,000 students, school boys and girls of all ages, who were to take part in the festivities, set off early in the morning. The boys walked, start­ing from the Piazza of the Lateran, whilst the girls went by train. The station was crowded with groups of children of all ages and sizes, each band in charge of it superior. It was a lovely day, and the bright Roman sun seemed to make everything ten times more beautiful than it was before: Arrived at their destina­tion, the girls tumbled pell-mell out of the train and streamed down the Via Latina, each one of them adorned with a knot of the Italian colors. Nearly all had marguerites in their button-holes in honor of the Queen.
Far and wide the place was black with people, and the vast open plain of this part of the Campagna was admirably fitted for such a ceremony. Each side of the way was gaily decorated with the flags of the different Italian cities, and the scene was further enlivened by cordons of troops keeping order. These lined each side of the road along which the Queen was to pass. They had hard work in keeping the crowd in their places. Naturally everyone­ scrambled for coigns of vantage, from which to see the Queen and the Royal pavilion. Some­times even the sacred enclosure where the trees were to be planted was invaded, but such bold intruders were instantly expelled. There were several bands in attendance, including those of the Carabineers and the Bersaglieri, in their picturesque hats, who were to accompany the song which the 8,000 children were about to sing to Queen Margherita.
The tree-planting was to take place on a bare patch of ground facing the Royal pavilion. From the accompanying photograph it is easy to see how much improved the landscape will be when the trees shall have grown up and clothed the ugly place. These trees, most of them pine saplings about loft high are brought in beforehand by laborers. They were carefully arranged on the ground in rows near their respective holes, which had been already dug so as to save time, and also so that.there should be no hitch in the proceedings.
The Royal pavilion was erected against the ­side of a tomb and gaily decorated with flowers and foliage. Above it was an effigy of Ceres, and at each side standards bearing inscriptions, all telling the same story, and exhorting the pre­sent generation to teach the coming one the love of trees and flowers. On the platform were three big gilt chairs for the Queen and Princesses. 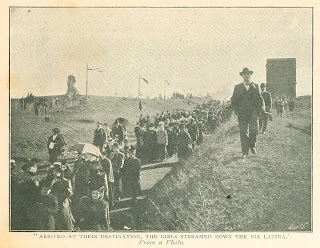