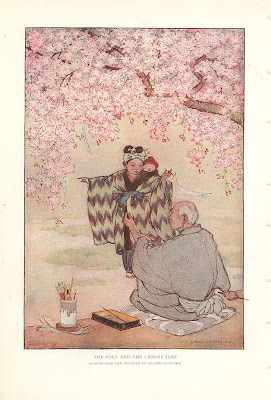 Japan, which has developed and given many flowers to the Western world, has now literally given her flowering cherry trees by the thousands to the cities of Washington and New York, that they may form avenues of beauty along the banks of the Potomac and the Hudson, in repetition of the Mukojima, the world ­famous avenue of cherry blossoms along the river bank in Tokio. The gifts have been made so gracefully and so oppor­tunely as to enhance their charm, and it must be that the annual blooming of these beautiful trees will be "a perpetual re­minder of the friendship of the two peo­ples." The Japanese have given us their favorite, their own mountain flower, the soul of Japan, the symbol of all they adore and aspire to. "Charming sakura" they call it lovingly in the commonest form of speech. It is not mere "Prunus pseudo­cerasus, with profuse flowers and decidu­ous leaves," that comes to us as a nation's gift, but what they call "the most beauti­ful thing in all the world."
No other flower in all the world is so beloved, so exalted, so worshiped, as sa­kura-no-hana, the cherry blossom of Japan. It is not only the national flower, but the symbol of purity, the emblem of chivalry and knightly honor, the crest of a cult the vernal celebration of which has been observed with unflagging zeal for at least two thousand years. 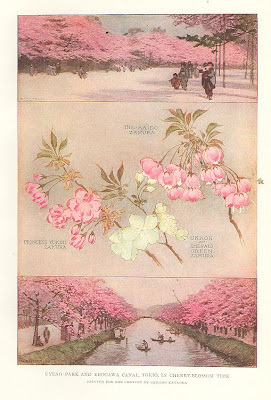 It is Japan's own flower, more omni­present than the chrysanthemum, and in­digenous to the soil of the Yamato hillsides and to the heart of the "home provinces" that surround Nara and Kioto. It did not come from China, where the little white mountain flower is un-honored and un­sung, and it had reigned long in favor before the "new religion" came over from the mainland, with its lotus symbol and peony decoration. As early as the fifth century, the emperor and his court used to go to the "Palace of the Young Cherry­ Trees" near Nara to view the blossoms and make boating excursions about the cherry bordered lake. There were imperial garden parties then, when princes, priests, knights, and nobles spent their souls in sketchy odes, and tied the poems to the branches. A thousand years, and five hundred years more, have passed away, and the imperial garden-parties continue.
Except Fujiyama and the moon, no other object has been theme and inspira­tion of so many millions of Japanese poems as the cherry blossom, and progress and modernity have not lessened its hold on the hearts of the whole people. All the emperors, "the one hundred poets," and all other immortals, have sung its praises, and in the trenches and dugouts and on the battle plains of Manchuria the soldiers made festival trees with bits of pink paper, or hailed a blooming crab­apple tree as the nearest substitute for their home blossoms. Painters, decora­tors, designers, artists, and artisans of every degree and kind have employed the flowers and buds more than those of any other tree. Forty cherry blossom crests are found in books of heraldry, and a cherry blossom superimposed on a chry­santhemum is the insignia of one of the princely houses. The young peers at the Nobles' School wear a metal cherry blos­som on their caps and collars, and in April all the sweets and cakes, and half the pretty things one eats, are in the shape of the five petal flower, or at least are ornamented with it. 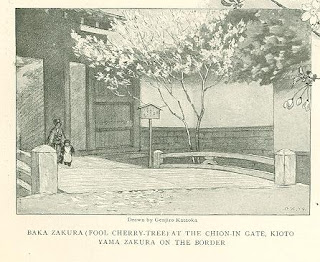 The court took the cult of the cherry ­blossom on from Nara to Kioto in the eighth century, and every spring trans­planted Yamato trees flushed the gardens and suburbs with rose color. Hideyoshi, the Taiko, man of blood and iron, but a flower worshiper extraordinary, exalted the cherry blossom to greater vogue, giv­ing garden-parties of ten thousand guests at his golden palace on Momoyama, and once summoning a company of the same number to the classic hillside of a thousand trees at Yoshino. The Tokugawa shoguns planted the cherry lavishly when they established their new capital at Yeddo, and there it reached its greatest development during the long peace of three centuries, when all the gentler arts flourished nobly.
During these last centuries, the sakura has been petted, pampered, humored, studied, cultivated, coaxed, and forced, until more than one hundred and thirty varieties are recognized. The Yeddo gar­deners achieved their greatest triumphs with this flower, and wrought miracles there. The daimios vied with one another in their gardens, and gathered great al­bums of sketches of their best flowers. Little books were published about the cherry blossom, the text offset by colored prints that are gems of xylographic art. Since the Restoration of 1868 the culti­vation of the cherry blossom has gone to greater lengths, and, at the Imperial Bo­tanical Gardens, Professor Miyoshi, the sakura specialist, is assembling the text and plates of an exhaustive monograph on the cherry tree of Japan from the most modern, critical, analytical, and scientifi­cally botanical point of view, this final word about the honored blossom to be published in another year. 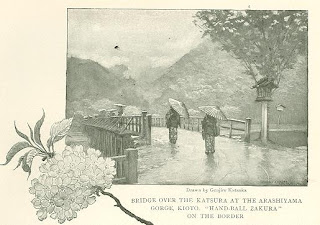 The evolution of the cherry blossom from the simple, single, little, wild moun­tain flower to a great, wide spread, two-inch blossom, as big as a Cherokee rose, and to great rosettes of "many­ fold," "hundred-petal," and "thousand­-petal," flowers, is as amazing as anything in the necromancy of Japanese gardening. Beginning with the stock of the wild mountain, or Yoshino, cherry, the garden­ers grafted the shoots of the flowering va­rieties close to the ground, then enlarged the petals, changed stamens to petals, and multiplied the petals. These they curled in cuplike forms beyond the possibilities of a plum blossom, and, beside the one indenta­tion of the traditional heart shaped petal, cut deep notches like a sparrow's beak, or made serrated edges like the petals of a pink or daisy. They called the latter flower the "little chrysanthemum." They curled and broadened the stamen's, stood them upright like the sail of a junk, and in some cases left two pistils of pale green in the heart of the rosiest flowers as a charming color contrast.
They also produced weeping or pendent branches and flowers, the most beautiful and graceful of cherry blossoms, and the first to bloom in the spring. In contrast to these softly swaying plumes of rose color, they evolved prim trees the flowers of which are like the wired constructions of our Western florists. Some blossoms, without visible stems, cling as closely to the twigs as plum blossoms, others swing on long flower stalks, .singly, in pairs, or massed in compact bunches like the "blob" in old hawthorn designs.
After doubling and re­doubling the petals until each floweret was a miniature rose, they car­ried the color from white and blush pink through all the shades of rose and cerise to deep ruby and crimson. For long years the wonderful "Ukkon" trees flowered only in the palace grounds at Kioto, and it was only by imperial gift that these blossoms of golden yellow, emerald green, and pale blue, or "water­color," bloomed in other gardens. Now the Ukkon may be bought at any Japanese nursery. 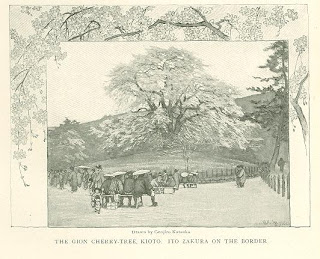 Nearly all varieties bear their blossoms on leafless branches, before the leaf buds have opened, but a few show a charming color contrast afforded by the tips of opening leaf buds. After the petals have blown away, "the snowstorms that are not from the skies, "the cherry tree clothes itself in green, and is only a common tree of restful color and grateful shade until frost ­time, when its rich brown and yellow leaves cling long to the gray satin twigs and branches.
The first trees to bloom in the spring are the single white and pink yama (mountain, or wild) zakura and the Yoshino zakura, the original species from which all the hundred-and-odd varieties are descended. Bul­letins in the daily papers record the progress of the flower buds, and to their condition is accorded all the distinction that race-horses or prize-fighters claim in the Western world. After the weeping trees have POEMS HUNG UPON CHERRY. scattered their showers of blossoms, the higan (equinox)­  cherries bloom, and after them come the "many­-fold" or "thousand-fold" flowers, with a lavish blooming that is the last word for the cherry blossom. In anyone spot one is always sure of at least a fortnight's continuous feast of flowers.
There are freak varieties of cherry that bear double and single blossoms on different branches or even on the same branches, and there are freak trees that bloom out of season and persist in doing it. The most famous of these "fool cherry trees" (baka zakura) is , in Maruyama Park, Kioto, beside the gate leading into the Chion-in temple grounds. "The winter cherry," the stately Chion-in priests call it, and the botanists name it "the October cherry"; but to the populace it is al­ways the "fool tree." Its delicate little white stars of blossoms shiver in the raw winds of autumn, its petals falling with the first snow­flakes. There is also the "four seasons" cherry, which blooms that often in the year, and the "all-the-year-round," which blooms like a monthly rose. The October cherry originated with a tree that was prevented from blooming at the proper time by a very late spring, with many blighting frosts. When the frost-bitten tree recovered its strength, it did its duty and bloomed despite the season; and having once lost count, it has gone on with its foolish and abnormal proceedings ever since.
The immortal "Sixteenth-day Zakura" of Iyo Province, the "Cherry-Tree with a Soul," that Lafcadio Hearn has immortalized in "Kwaidan," blooms on the sixteenth day after the New Year of the old lunar or Chinese calendar in the first days of March of the year, in which I made a pilgrimage to it. No one whom I questioned in Matsuyama knew of the famous sakura, and it was only by the clue given in "Kwaidan" that it was found. It was an achievement to discover the "Jiu-Roku-Zakura," and it was discovered in the queerest company, the blooming beauty of its branches shadowing brightly a group of shaggy, disheveled, melancholy Russian prisoners of war, pawns taken in the great game won at Port Arthur. Despite the presence of these aliens, the Iyo country folk had made pilgrimage to "the cherry tree with a soul" and hung it with poems to filial piety as well as to Japan's flower. The soul incarnate in the tree is that of an old man who, when near to death, prayed that he might live long enough to see this be­loved cherry tree bloom again. It was then the dead of winter, and only the plum trees were beginning to show signs of returning life; but the gods granted the prayer, the beautiful tree covered its branches with rose-pink flowers, and when the happy spirit had left the wasted human body, it entered the tree, and it lives there to this day - so the Iyo people say. In that year of the war the blossoms were. so pale as to be nearly white. "So much blood has been  shed over there in Man­churia," said the priest of the temple, "that this year the cherry blossoms are blanched. " 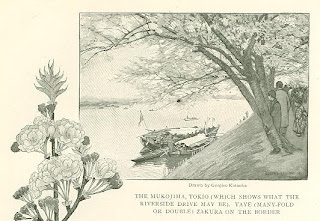