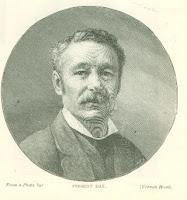 Charles Wyndham was, at eighteen, a medical student at Liverpool, at which city he was born; but having taken his degrees of L.R.C.S. and L.S.A., he went, at twenty-one, to America, and made his first appearance as an actor at Washington, with John Wilkes Booth, to whose Hamlet he played Osric. Booth, who perhaps was never wholly sane, and who three years later made himself a name of world-wide infamy by shooting Presi­dent Lincoln in a theatre box, saw so little sign of genius in the new actor that he discharged him for incom­petency.