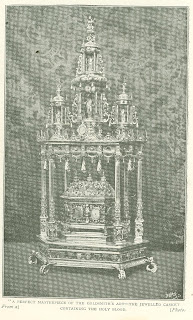 Everybody in these days knows Bruges, if not through personal knowledge, at any rate by hear say. Bruges, the Northern Venice of the Middle Ages, known as such by virtue of its world-wide commerce and the splen­dor of its Courts under the Counts of Flanders, and later under the Dukes of Burgundy.
Over seven and a half centuries have elapsed since Thierry d'Alsace, Count of Flanders, as a fitting reward for glorious deeds performed in the Holy Wars, received from Baldwin III., King of Jerusalem, and the Patriarch of Jerusalem, a portion of the precious relic preserved in the Church of the Holy City­ a relic whose sacredness and virtue called forth all the intense religious enthusiasm and ardor distinguishing the followers of Peter the Hermit in the eleventh, twelfth, and thirteenth centuries. And what wonder, when the world­ famed relic was no less than some of the blood of Christ!
Tradition shows that it was through Joseph of Arimathea that the Church obtained this relic. He it was who took the body of Christ down from the cross, and who, after reverently bathing the sacred wounds, preserved the blood which had sprung there from; his descendants even­tually handing their precious heirloom over to the safeguard of Mother Church. 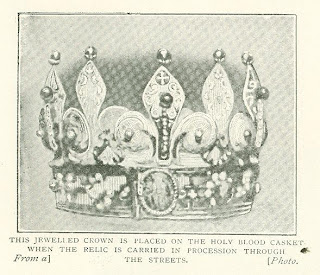 Relying, therefore, firstly on the enormous probability of anything connected with the Savior during His earthly life being devoutly sought for and treasured by the early Christians after their Master's death; secondly, on the decided conviction given in endless historical documents by those great in learning and wisdom of the Eastern Church; and lastly, on the assertions of the historians of the Holy Land, the Church considers it a fact, based on solid and well founded grounds, that the relic it pays such intense and devout veneration to in the May of each succeeding year in the ancient capital of Western Flanders is actually and in­contestably the Blood of our Lord.
Thierry d'Alsace brought it to Bruges in 1148 with all the pomp and circumstance be­fitting so precious a gift. He placed it for a while in the private chapel attached to his Palace on the Bourg; I give a photograph of the Palace, which is remarkable for the elegance and delicacy of its architecture. It is now used as the Town Hall. In the right hand corner of this photo. you see the Chapel of St. Basil, where the relic was eventually placed, and where it is to be seen to this day, at any time, for the modest sum of fifty centimes. The lower part of this chapel dates from 1150. The Holy Blood was kept there for close on four centuries. In 1531-1533 the upper chapel, part of which is said to have existed in 1482, was finished, and the relic placed in it.
Whenever their sacred charge was in serious danger of falling into irreverent hands, the guardians thereof - known as the Guild of the Holy Blood - rose in a body to withstand any and every attack made upon it. 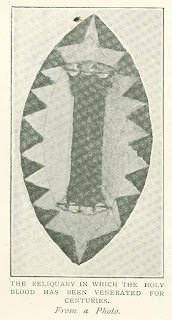 In 1578 a band of iconoclasts from Ghent made a forcible entry into Bruges, and began a systematic course of sacking and pillaging every church and chapel in the place. The relic was only saved by the vigilance: of a Spanish member of the Guild, one Don Juan Perez de Mal­venda, who, seeing the danger it was in, carried it off in the folds of his cloak to his own house, and hid it in a place of safety until the storm was past.
Once again, in 1792, when the French Revolution was at its height, and the French them­selves in Bruges, did the good citizens shake in their shoes for the safety of their beloved treasure. The chaplain of St. Basil conveyed it, first to the Episcopal Palace, and then to a certain Richard Godefroit's residence, where it was blocked up in a cavity of the wall until the following year.
Again in 1795, when the san­guinary law of suspects was promulgated, and terror reigned predominant in every heart, the vial containing the Holy Blood was packed into a strong box and sent with others holding Church treasures into Holland for a time. Later in the same year, however, the relic was brought back. From 1795 to 1819 it was carried from one hiding place to another in Bruges itself, when, all danger over, it was finally restored once more to public veneration, although not to its ancient resting place. In their senseless fury against everything relating even to the very word "religion," the Revolutionists had practically demolished the Chapel of St. Basil, leaving merely the outer walls standing. In 1819 its restoration was begun, and in 1824, the lower part being finished, Bruges placed her precious relic once more within its walls.
Every Friday morning throughout the year the relic is exposed to the veneration of the faithful from the first morning mass until after the last, which is said at eleven o'clock. 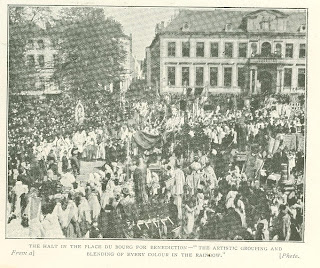 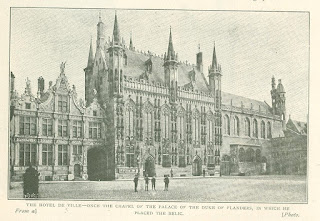 I arrive in time to find the Benediction about to be bestowed. A more picturesque sight I rarely, if ever, saw. The next photo­graph gives a view of it -although, to see it to its greatest advantage, one must be actually present to appreciate the artistic grouping and blending of every color in the rainbow. I stand in the midst of pilgrim fathers with their staves, and of the Apostles surrounding a man personifying our Lord. Near me stands a tiny St. John the Baptist in flesh ­colored tights, a sheep skin his only covering.
Farther on are grouped girls and boys in the costumes of every nationality on earth - all bear­ing testimony to the widespread power of Mother Church; and close at hand is a group of young girls, veiled in white and wearing many colored robes, each bearing a cushion on which are placed the various symbols of the Crucifixion, viz., a sponge, a hammer, dice, nails, and so on. A statued group of Christ after the descent from the Cross; Our Lord lying in His Mother's lap; and a silver "chasse" containing a fragment of the Holy Cross - both resting on stalwart shoulders - are just behind me.
Priests, banners, all the different groups, and the soldiers' uniforms help to make a wonderful spectacle, as they stand massed together in the old "Place," which has seen the same sight (with very occasional breaks) ever since the year 1303, when this remarkable procession was instituted, to which Emperors and Kings, with their Royal Consorts, Archdukes, and the great of many lands have paid the tribute of their presence; not forgetting the present Pope, when he was Apostolic Nuncio at Brussels in 1844 (a fact the devout Brugeois love to dwell on). A wonderfully fine sight, indeed, recalling visions of the days of long ago.
The last photo. shows the final act in what has been a long and tiring morning for most of those taking part in the procession. It is no small matter walking over the uneven cobbles of Bruges, under the weight of heavy statues and huge banners.
The Lancer band fills the air with music, until the Bishop mounts the steps of the gor­geously colored altar, erected in front of the grey old Hotel de Ville for the occasion. Then comes an almost complete silence among the tremendous crowd around me, as Monseigneur, surrounded. by lesser dignitaries of the Church, turns and raises the holy relic itself in blessing above the kneeling multi­tude, all of whom cross themselves devoutly. A roar of sound succeeds the silence! The Church groups disperse, the bands play them­selves off the "Bourg," each to a different air; the besandalled and brown-bearded Carmelite monks who have taken part in the morning's proceedings stream by me in their coarse brown robes, one of them bearing aloft a painted wooden cross, on which are displayed the signs symbolical of the Crucifixion; the crowds hurry off to seek shelter from the now fast-falling rain, and the great ceremony is over.
It only remains for me to add that it is greatly owing to the courtesy of Monseigneur Bethune, Canon of the Bruges Cathedral, that I have succeeded in obtaining so many details concerning the history of Bruges' most sacred relic.
Originally published in The Wide World Magazine.  December 1899.
----------------------------------------------------------------------------------------------------