By EVELYN BRIGGS BALDWIN.
Commander of the Baldwin-Ziegler Polar Expedition.
EDITOR'S NOTE.-This article constitutes Mr. Baldwin's only announcement to the public of the plans and purposes of the Baldwin-Ziegler Polar Expedition, which sailed from Tromsoe, Norway, July 17th. Evelyn Briggs Baldwin, the commander of the expedition, was born at Springfield, Missouri, July 22, 1862. After studying and traveling in Europe many years, he entered the service of the United States Government as observer in the signal service. Mr. Baldwin accompanied the Peary Expedition of 1893-1894 as meteorologist. In 1897 he journeyed to Spitzbergen, hoping to join Andree's expedition, but there was no room for him in the balloon-car. Later he accompanied the Wellman expedition of 1899. 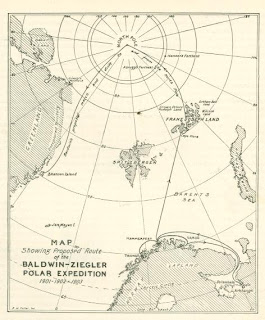 To solve the mystery that lies hidden at the North Pole has been for many years the cherished ambition of my life. That I am now accorded an op­portunity to realize this ambition is due to the patriotic munificence of Mr. William Ziegler, of New York, who has placed at my disposal unlimited means to carry out my plans.
Certainly no expedition ever sailed for the North with so comprehensive an equipment as ours, or perhaps with prospects half so bright.
From the very first Mr. Ziegler has evinced a sympathetic interest in the fruition of the single purpose which I have so long kept steadfastly before me. On the day when he made my heart glad by announcing that he would finance the expedition, he said: "I do not want to see any but an American win the honor of the discovery of the North Pole, when so many of our brave country­men have sacrificed their lives in the effort to attain it. I think America is great enough and progressive enough to have that distinction." 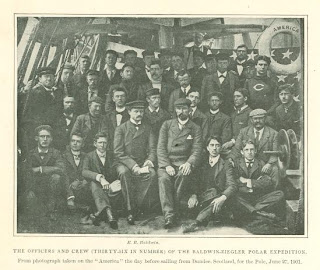 To Mr. Ziegler, therefore, will belong much - I may, without doing my comrades injustice, say at least half the credit, or glory, as it is commonly expressed, if this expedition succeeds in planting the Stars and Stripes first at the Pole.
Our fleet comprises three vessels. The "America," our flagship, as someone has expressed it, is a three masted ship rigged steamer of 466 tons net burden, driving a single screw. Her length over all is 157 feet; beam, 27 feet; depth, 19 feet. She is constructed of solid oak throughout, having a sheathing of greenheart from keel to waterline. She is two feet thick on her sides, these increasing to two and a half at the bow. Only two years ago she was given a new keel and hull, and shortly before this new boilers and engines added to her orig­inal power or capability of pushing her way through difficult fields of polar ice. More­over, in addition to the foregoing, and for the present voyage, she has been provided with new masts, decks, and special accom­modations for the crew. Besides all this, she now boasts enrollment as a steam yacht in the New York Yacht Club, the burgee of which I have the honor to fly from her mast head. Before being rechristened, she was held to be the crack whaler of the entire Dundee fleet. And after all the repairs and overhauling at Dundee had been done, I felt certain that I had beneath my feet as. stanch and true a craft as I could wish for.
The" Frithjof," a Norwegian sailing vessel, that has seen much service in the Arctic seas, was chartered to serve as a tender or supply steamer to the "America." She is of the same general construction as the  "America," although smaller, registering 260 tons net. Her cargo capacity is about 300 tons. In 1898 she bore me to Franz ­Josef Land, in 1899 she carried the Swedish Expedition under Professor Koltoff from Spitzbergen to Greenland, and now, in 1901, I expect to take her farther north than she has ever been before. I consider her peculiarly well adapted to the work mapped out for her, being in command of Captain Kjeldsen, who, for more than a quarter of a century, has taken many a vessel from Norway to Spitzbergen and Franz Josef Land in the ice, which challenges man's utmost skill in making a passage. It was Kjeldsen, too, who, twenty-eight years ago, was in command of the tender "Isbjorn," which acted as a supply vessel for the  "Tegetthoff," the steamer under command of Payer, which bore the Austro-Hungarian Expedition northward on its eventful voyage of discovery - the discovery of Franz-Josef Land itself.
The third vessel is the "Belgica," which carried the Belgian Antarctic Expedition of 1897-1899 under Captain Gerlache. Her experience in quest of scientific treasures from the southern regions of ice, as described in Dr. Frederick A. Cook's "Through the First Antarctic Night," likewise bears testimony that she is well fitted for arduous work in the North. She, too, is similar in construction to the "America," and is 110 feet long, 26 feet wide, and draws 15 feet of water. Under the able direction of Cap­tain. John Bryde and the sturdy crew of Nor­wegians, I do not doubt for a moment that she will accomplish the mission which I have established for her. 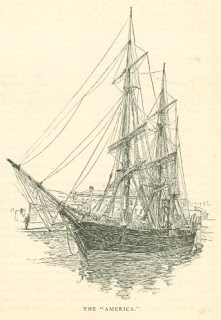 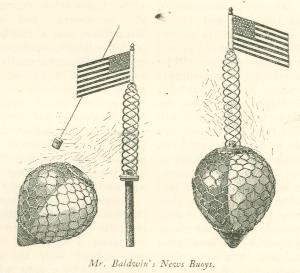