By LIEUT. R. E. PEARY, U.S.N.
The whole history of Lieut. Peary's meteorite told by the great Arctic explorer himself, and
illustrated by means of some very interesting photos. 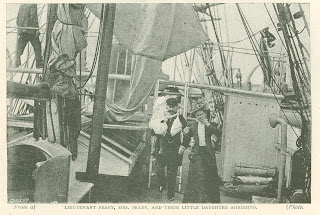 PECULIAR interest attaches to aerolites, those strange, rare bodies which, issuing from the infinite abyss of universal space, fall upon the earth with loud detonations, accompanied by flashes or trails of brilliant light.
Legends and records, more or less mythical, have come down to us from the earliest days concerning the arrival of some of these heavenly visitants; and they have been, without exception, objects of veneration awe and even worship. Some of them have played a part in history and are still in existence, venerated for memorable associations, historical and religious.
Peculiarly interesting are the "Saviksue" or Cape York aerolites, not only from their size, their unusual purity and homogeneousness of composition, and the extreme northern latitude in which they are found, but because they were apparently Heaven sent to supply one of the most urgent needs of the northerly tribe of human beings - a little family of Arctic abori­gines, numbering but a few more than two hundred souls - literally ice imprisoned in the gloomy depths beyond the Arctic Circle.
These huge masses of pure, soft iron, sent to a people so imprisoned and isolated that only by a special dispensation of Providence could they obtain the precious metal, have enabled that people to pass from the Stone Age to the Iron Age.
The authentic history of these interesting aerolites can be told in a few words. In 1818 Captain John Ross, of the Royal Navy, dis­covered the Arctic coasts in the vicinity of Cape York to be inhabited by a tribe of previously unknown Eskimos. Much to his surprise, he found in their possession iron, which they said they had obtained from great masses forming part of a mountain in their country. Pieces of this iron, taken home by Captain Ross and analyzed, were found to contain nickel, indicating meteoric origin. 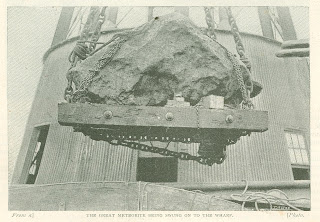 Various unsuccessful attempts to locate these "Iron Mountains" were made during the follow­ing seventy-six years, and on Wednesday, May 16th, 1894, I left my Arctic headquarters at Anniversary Lodge in search, of them, being moved to the enterprise by information which I had obtained at various 'times from my Eskimo' friends. Lee accompanied me, and my iron runner sledge, drawn by ten fine dogs, was loaded with our provisions and equipment.
At the Eskimo settlement of Netiulumi, on the south side of Whale Sound, I picked up my guide Telikoteenah. This man was thoroughly conversant with the region about Cape York, where he had lived for several seasons, and he professed to be well acquainted with the location of the "Saviksue" (aerolites), which he said he had seen repeatedly. He told me that the smallest was about the size of a "mikkie" (dog) - indicating a dog curled up - the other much larger, and that they were up on the side of a mountain in Melville Bay, far to the east of Cape York.
After much talk and considerable hesitation he agreed to guide me to the aerolites, and we started with sixteen dogs and two sledges. At the end of ten days of arduous sledging along the savage Arctic coast we had rounded the dark cliffs of Cape York, and were approaching the head of a little bight well into the recesses of Melville Bay. The wonderful iron stones lay on the slope of a mountain near the head of this bight, according to my guide's report, but now they were deeply buried in the winter's snows. 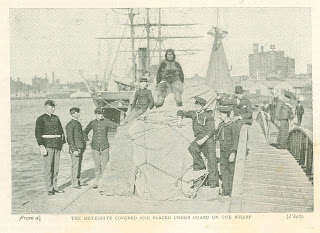 After passing some 500 yards up a narrow valley, Telikoteenah stopped and began probing with his whip handle, until a bit of blue trap rock, projecting above the snow, caught his eye. Kicking aside the snow he exposed more shards, and told me this was the top of the pile of stones used by his ancestors in pounding fragments from the "Saviksue.'" He then indicated a spot 4 ft. or 5 ft. distant as the location of the long-sought aerolites.
After bringing the snow knife from the sledge, he began excavating the snow, and after digging a pit some 3 ft. deep and 5 ft. in diameter, at half ­past five o'clock on the morning of Sunday, May 27, 1894, the great brown Heaven-born* mass was seen for the first time by a white man. After the removal of its heavy blanket of snow, I found it completely coated with a covering of ice 1/2 in. thick.
This aerolite, seen from above, was of an irregular rounded trapezoidal shape, with a cir­cumference of 11 ft., a maximum length of 4 ft. 3 in., and a maximum width of 3 ft. 3 in. I estimated its weight at not less than 5,500 lbs. It was surrounded and partly covered by nume­rous fragments of fine grained, blue trap rock, portions of wave worn boulders and cobbles, which the natives had brought on their sledges from far up the Smith Sound Coast for the purpose of detaching flakes of the metal.
The "dog" was about 100 ft. away from the larger aerolite, and I made no attempt to dig through the snow to it.
Telikoteenah told me how the ancient knives of his people used to be made, by inserting several small flattened pieces of this iron in a bone or ivory back. Then he took up a piece of trap lying near and showed me how the flakes of iron were detached from the aerolite. 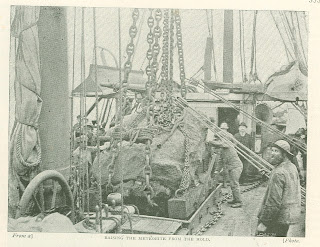 
It is a terrible moment for the starving hunter. The distance of the seal is twice the range at which his blunt, flint-headed harpoon would be effective, but in despair he hurls his weapon. It reaches the mark just as the seal plunges into the water. The blow is weak, and yet the harpoon, its way cleft for it by the celestial metal, drives into the vitals, and the struggling seal is his.
So starvation was averted. The "heaven woman" had given the dusky hunter full measure of sweet life, his own, his wife's, his children's.
It would be not many days after this when he and. his family, once more strong and well fed, started for the "Great Cape," his precious harpoon head suspended by a rawhide thong to his bosom. Once there, his comrades, who had given him up for dead, crowded round him in surprise, which deepened when he drew the weapon from his bosom, and told them all his story.
Conceive how their surprise changed to awe; think how the awe became delight, when they went out upon the ice and saw him, now no longer weak with hunger, hurl his harpoon with its small, glistening point and transfix his seal at three times the distance that their stone weapons would drive home! .
Then teams of wolfish dogs, urged by adder­-like whips, spread the wonderful news through the tribe, the dusky hunters gathered from every settlement, and before the sun set for the next winter (long night), the point on every hunter's harpoon was tipped with bits of the body of the "sky woman."
*  " Saviksue," Eskimo word meaning great iron-stones. It will be remembered that when Mr. Peary returned from the Arctic Regions; he brought with him two large aerolites of pure metallic iron. These aerolites had been the source from which for genera­tions a little tribe of Eskimos, the Arctic Highlanders, had obtained there iron for their knives. The larger of these two aerolites, the woman, weighs about 6,000 lbs., the smaller, the dog, about 1,000 lbs. With the exception of the large Cranbourne siderite in the British Museum, weighing some 8,000 lbs., the larger of these two aerolites (the" woman") far exceeds the largest in any of the other large museums of the world. The gems of the National Museum, the Paris Museum, the Yale College Museum,. and the Field Columbian Museum weigh respectively 2,000 lbs. (estimated), 1,790 lbs., 1,630 lbs., and 1,013 lbs., while the largest in the Museums of Vienna and the University of Boar Are still smaller.
* Chemical analyses of these masses of iron leave no room for doubt as to their meteoric origin, and that they have fallen from space.
Originally published in The Wide World Magazine.  July 1898
----------------------------------------------------------------------------------------------------