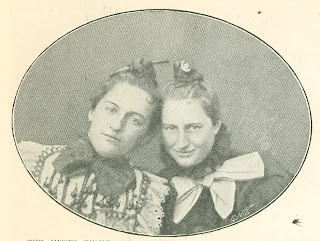 You may be amused by Mr. Wade's enthusiasm, but you will be obliged to agree with him. Here are two well-to-do young ladies who have not appeared in women's garments for four years at a stretch! They manage a ranch of 10,000 acres of wild country; shepherd thousands of sheep and cattle; and are caned upon to defend their property against bears and wolves, storms and forest fires.
It is doubtful if the world has ever produced anything that would classify in the same rank with the life of Gussie and Louise Lahm, two young girls, aged eighteen and nineteen respectively: They were born and bred in the mountain fastness of Mendocino County, Cal., and they perform at this day deeds that would make their pink and white sisters faint dead away with terror merely to contem­plate. Your shepherdess of fairy tale and song is a petite scrap of femininity, armed with a crook with ribbon attachment, and with a docile flock of sheep browsing near, by way of picturesque adjunct. Such is the yawning difference between romance and reality. California's pair of shepherd­esses are entitled to quite as much distinc­tion; but they wear blue overalls and jumpers, and carry guns in lieu of shep­herdesses' crooks. These two Diana's are daughters of the hardy German class of farmers; and with the natural thrift which is so characteristic of the Germans, the two sisters were reared to be more useful than ornamental. Thus from child­hood up they were accustomed to regard Nature as their friend. Throwing aside the customs and usages of their sex, drawn from Nature's storehouse they have a thorough and complete knowledge that baffles all the ills and weaknesses which their fair sisters accept as a natural consequence of their sex. 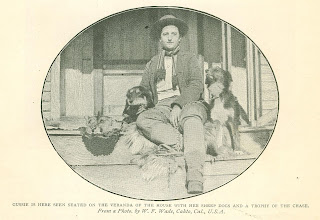 Recently the writer, while travelling overland in Northern Mendocino County reined in his horses to permit a mammoth band of sheep to pass by in charge of two herders, who were well mounted on two spirited horses. Astride the back of one of the horses, behind its rider, lay a beautiful panther dead, of course. The Amazonian garb of the herders, whose wide Mexican sombreros shaded sun-browned faces, was remarkably out of keeping with their musical voices and gentle, girl-like demeanor when interrogated about their panther prize. These were, indeed, no uncouth men of the mountain, notwithstanding their attire and vocation. Rather were they two wonderful young women, whose home of youthful happi­ness stands perched high on a crag in Northern Mendocino, where the best of Nature's elixirs abound; and before the first blush of daylight the courageous girls' haunts are the forest fast­ness, where rare bravery and unfailing good cheer are absolutely essential. They are flesh­ and blood heroines, and their bravery would shame the cowardice of many men and the petulance of some women.
Something like two decades ago Jacob Lahm married in Santa Rosa, California, and went to this northern frontier for honeymoon and home. He was one of the pioneer settlers in Mendocino County, taking up 10,000 acres of virgin wild forest land along the mountain range for a cattle and sheep ranch. But on these densely­ wooded acres were other things besides gigantic redwoods, firs, and pines. There were panthers, bears, coyotes, and numerous other wild animals which should, in a measure, be exterminated before the ranges could be fully stocked. So Jacob Lahm turned hunter and trapper, and became noted throughout the country as an expert. 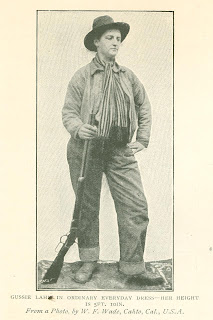 Gussie and Louise were born on this mountain ranch, but the mother's arduous domestic duties did not permit her to bestow upon them that maternal care which the girls would have received under other circumstances, That duty therefore fell to the father, and shall we declare that he was lacking in wisdom in this? For, having no sons, and knowing that he could not always protect his dear ones in their isolated surroundings, he taught the girls out of his own wondrous knowledge of life in the open. He taught them how to combine the wisdom of a strong, courageous man with the modesty of a woman, with the consequent result that these girls possess a most uncommon list of out of ­the way accomplishments. Their ranch and stock possessions are worth about 50,000 dollars. The father had grown old, and died a few months ago, and his blithesome and willing daughters - spirited and splendid specimens of the women of the West - have now added the financial duties of the ranch to their numerous other responsibilities. They devote themselves exclusively to everything pertaining to cattle, horse, and sheep raising, caring nothing at all for the great world of which they so seldom even hear. They know nothing of metropolis life, and what meagre education from books they have acquired has been in the district schoolhouse, many miles away. 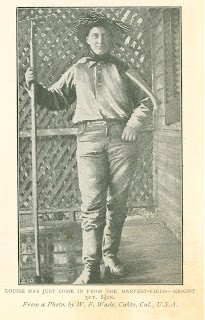 Undoubtedly any two sisters who read this would surmise the Misses Lahm had not much leisure for lessons if they were compelled to look after the destiny of some 5,000 sheep, together with droves of cattle and horses. At certain periods of the year, however, when they are not particularly busy, the young women have been known to don skirts and associate with the pupils at school. At the close of school hours they speed home, change into the jumpers and overalls, in which they feel so much more at ease, and then wind their heavy auburn air atop of their sensible, shapely heads. Next they pull their leather-trimmed sombreros over their be-freckled  faces, slap the saddles on the broncos, and then, like a flash, speed over the mountains' to bring back those wandering thousands of sheep into the fold before nightfall.
Let the ordinary woman just think of spend­ing the major portion of her life in the saddle under a sky of many changes! Bright of eye and stately of carriage are these Californian wild flowers of womankind. They are magnifi­cent samples of what an athletic life will do toward the development of muscles and sinews, and yet in no way are they coarsened by their free and independent life. The fair, peachy colored skin of the fatherland is tanned; the strong young hands are as brown as the sun can brown them. Eyes, accustomed to penetrating dense under-brush, and gazing steadily at far­away cliffs and bluffs in locating lost sheep, are calm and fearless. The sisters closely resemble each other.

The range thereabouts covers an area of about twenty miles, and every foot of it is familiar to both of these remarkable girls. From the time they were big enough to hang on to a horse's mane they have been as much at home in an astride saddle as is a fashionable lady in a London drawing-room. Skilful to a remarkable degree are they in shooting, trap­ping, lassoing, branding sheep, shearing, and tracking game. Riatas are always tied to their saddles; and they can lasso a wild horse or steer with unerring success. Plowing, har­rowing, sowing, and harvesting come under the category of their rural attainments. They brand all the offspring of the sheep, supervise the shearing; market the wool, and even assist the men they employ in the shearing season by cooking for them. Always of cheerful disposi­tion are they, whether preparing the morning meal before the sun climbs up to smile on them, or when out in the fury of blinding mid­night storm on the mountain in search of bleating lambs that are crying like motherless babes in the darkness. The splendor of the forest and rock scenery from one of the mountain ranges on the Lahm estate excites awe and admiration, particularly at a point known as Big Rock, where one of the Eel River tributaries comes cascading down the. mountain with rollicking music and enters the great valley below.
Originally published in The Wide World Magazine.  June 1900.
----------------------------------------------------------------------------------------------------