The revolution, as everyone knows, placed French society upon a plane of equality, and on August 6, 1791, all orders of chivalry were abolished.
There remained, therefore, for the magnificent soldiers of that essentially warlike epoch no reward save pro­motion in rank. As the illiterate, who were then in great numbers, could not aspire to that honor, the in­justice of such an institution towards the humbler heroes became manifest. A vet­eran who could not read, but who, nevertheless, had fought for France and liberty from Valmy to Zurich, carried no out­ward sign attest­ing his bravery, and it was not un­til 1799 that na­tional rewards were bestowed up­on those military men who had dis­tinguished them­selves by brilliant action.
Hence the insti­tution of  "arms of honor." Guns, swords, sappers' axes, and even drumsticks and bugles of honor were distributed. It was owing to this custom probably that Bonaparte, at that time First Consul, conceived the idea of a uniform recompense for military valor. In the mind of this great genius the concep­tion was bound to be amplified, so in 1802 he founded the Legion of Honor for the purpose of rewarding all ­civilians as well as soldiers who had rendered particu­lar service to the country. 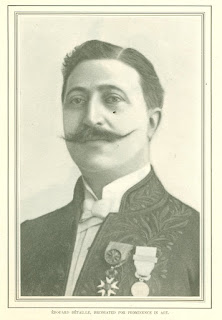 In vain the old republicans - and they were many ­protested against what they termed the re-establishment of a "bauble of vanity." Bona­parte knew, and often said, that men were best led by an appeal to their imaginations. He foresaw what value would be at­tached to these in­signia of a nobility merited by cour­age or by talent, by a selection made with justice from among citi­zens without dis­tinction of class. In a word, it meant the establishment of a democratic elite.
MILITARY LEGION­ARIES
The Master of Battles very nat­urally gave to his own soldiers the main share in the order which he had just founded, but from the very first he admitted thereto legislators: diplomats, magis­trates, scientists, men of letters, and ar­tists. In order to prove emphatically that the Legion of Honor was destined for all sorts of merit, he desired that the first grand chancellor should be a civil­ian, and chose for the post Lacepede, the famous naturalist. Bu£fon's illustrious successor. 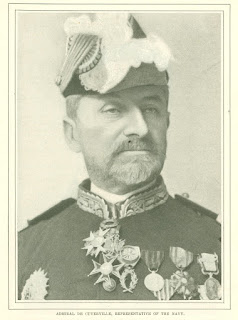 Doubtless, Napoleon during his reign - the most glorious as well as the most sanguinary in the history of France ­was obliged to bestow the five pointed enameled star with a lavish hand among his soldiers. To cite an example of this, the cavalry regiment of Grenadiers of the Guard - about a thousand swords contained three hundred chevaliers of the Legion of Honor. It is certain that in order to maintain the prestige of the order, he distributed the honors far more rarely among civilians. With re­spect to them, he showed himself very exacting in the qualifications of candi­dates.
Bourrienne, his old comrade of the military school- Bourrienne, who for several years was his confidential secre­tary, but whose probity he came to suspect - was never able to obtain this distinction. As the prejudice against ac­tors was at that period very strong, nei­ther was Talma ever decorated. Talma, friend of the youthful lieutenant of ar­tillery. Bonaparte, the man who had opened his purse to the Little Corporal in the dark days; Talma the great tra­gedian, with whom the emperor had always maintained the most cordial rela­tions, and from whom, it is said, he took lessons in deportment, died without the cross.
CIVILIAN LEGIONARIES. 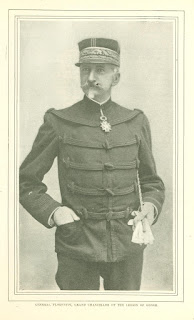 However, if Napoleon off the field of battle showed himself so parsimonious with his cross, it gained thereby inesti­mable value in the eyes of civilians. Be­sides which, he took good care to main­tain its democratic character.
A child of the people, an artisan, whose name has been given to one of the principal thoroughfares of Paris, and who will be remembered as a great bene­factor to the laboring classes, Richard Lenoir, discovered a process for the fab­rication of cottons and calicos which per­mitted him to raise a powerful competi­tion with the manufacturers on the oth­er side of the Channel. In the midst of the continental blockade, when an the ports were closed to English products, Richard Lenoir thus rendered valuable service to the imperial policy.
Napoleon made his way to a dis­tant suburb at Charonne, and, surpri­sing Lenoir in his workshop, surrounded by his workmen in their blouses, deco­rated him with his own hand, saying. "You are more successful than I in fighting the English." It is easy to imagine how a civilian legionary would prize a cross received under such condi­tions; the emperor could not have done more for one of his grenadiers, had he brought him a captured flag.
THE CEREMONY OF INAUGURATION.
In the beginning, the Legion of Honor comprised sixteen "cohorts," each hav­ing a chief, seven grand officers, twen­ty majors - now called commanders ­thirteen officers, and seven hundred and fifty legionaries. It numbered in all, then, six thousand five hundred mem­bers. Salaries were attached to each grade, from the great eagle, who re­ceived twenty thousand francs, to the simple chevalier, who obtained a modest pension. Two schools were establish­ed for the daughters of the legionaries, on whom the emperor reserved the right of bestowing dowries. It was, in fact, a magnificent institution, well worthy of its founder. 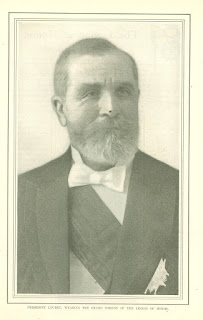 The Legion of Honor was inaugurated by two profoundly touching ceremonies of extraordinary pomp. One was cele­brated in Paris, in the chapel of the In­valides, under the splendid dome filled with souvenirs of Louis XIV. The other was at the camp at Boulogne, where Na­poleon took the insignia for the new legionaries from off Bayard's shield and out of Du Guesclin's casque.
It was thus that Bonaparte, the prodigious poet in action, conjuring about him souvenirs of the heroic past of old France, attempted to reconcile it with the new, and he, the modern Caesar. born of the Revolution, proclaim­ed himself the natural heir to fourteen centuries of monarchical glory.
From that hour, July, 1804, the Le­gion of Honor shone in every scene, in every episode of the Napoleonic epic. When the emperor passes on horseback among his soldiers, and a gust of wind lifts the revers of his gray redingote and shows the enameled jewel upon the green uniform within, one might truly say, " 'there is the star which led the Grand Army! "
To win it by merit so that through the thick cloth of their coats they might feel its martial warmth upon their hearts, these indefatigable foot soldiers with their begaitered legs are ready to march to battle in the four corners of Europe. These gallant cavaliers with their long tailed helmets or plumed col­backs await but a sign to charge through a volley of grape shot. These severe ar­tillerymen, their foreheads wrinkled un­der heavy bearskin caps, consider the cannon they serve as sacred as the flag, and, rather than abandon them, will die by their side.
THE MEANING OF THE ORDER. 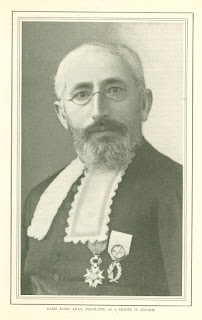 Each one of these men has but one desire, one ambition to see the cross fastened upon his breast by the little hand of the emperor, and even in that fabulous moment of history - not so far distant - the humblest of these heroes may dream that his bit of ribbon will he transformed into a broad red sash like that which decorates the gold braided coat of Ney or of Massena, the command­er of an army corps, and who, too, was once but a simple soldier.
Such was the Legion of Honor under the reign of the Emperor Napoleon. That remarkable series of victories, among which figured Ulm, Austerlitz, Jena, Friedland, Wagram, Smolensk, and Moscow; that even more heroic re­sistance to defeat which faltered not from the retreat from Russia until Wa­terloo; that intoxication, that mania for glory, which possessed the whole nation; the sacrifice by France of a million of her sons - all these things, it may be said, Napoleon obtained with the aid of a strip of red ribbon and a jewel of in­significant value.
And what is fully as surprising is the fact that the Legion of Honor, which has existed for a century, and which the various regimes that have ruled over France have tended, consciously or otherwise, to depreciate, has maintained an incontestable prestige. It is aston­ishing, but it is true, and nothing better proves to us the tremendous force of Napoleon's conception-a nobility among the democracy.
MISTAKES OF THE BOURBONS.
The first blow - and a serious one­ - was dealt the Legion of Honor upon the return of the Bourbons. By the char­ter of 1814 the decoration was kept up, but it represented the work of the usurp­er, it kept his memory alive, and had it not been for the fear of military sedi­tion it would have been abolished. the Bourbons added to the cross and im­posed upon the army and the officials the Order of the Lily, which became im­mediately ridiculous; reestablished the old orders, reduced the appointments of the legionaries by half, and substituted the effigy of Henry IV for that of Na­poleon. They did more than that, and much worse, in distributing the cross promiscuously right and left, even be­stowing it upon altogether unworthy in­dividuals. During the last six months of 1814 more than ten thousand crosses were distributed.
Without entirely calming the fury of the reaction, the return from Elba and the Hundred Days did much to modify , it. The second Restoration finally understood that, far from destroying so powerful an institution, it was better to appropriate and make use of it: and the following regimes - alas, too numerous under which France has lived have tried, if not to restore the star to its original splendor - for that were impos­sible - at least to preserve some of its brilliancy. Let us say at once that in France the undertaking was an easy one, for at all times social superiority had been sought after.
For one cross obligingly bestowed upon a political agent or other indi­vidual of doubtful reputation, there are twenty, thirty, which honor brave soldiers, worthy servants of the country, useful and honest people of all kind; and, since it is not disdained by of superior talent by eminent persons in the world of science, of letters, of arts, and of industries, who are the shining lights of the order, the jewel which bears the device of "Honneur et Patrie" is always much sought after.
In France where the spirit of irony is wide spread, we often speak flippantly of the cross; but when we do so it is in thinking only of the little red ribbon fastened to our civilian coats.  We become serious at once when the echoes of the thunder of the cannon and the rattle of musketry come to us from one or other of our distant colonies.  We remember then that back there on a stretcher lies a poor fellow who bleeds and suffers, who thirsts and calls for his mother.  We know that to revive his fading sight, to bring a smile to his fever parched lips, to save him from death, perhaps, it will suffice to pin the cross upon his shirt.
Originally published in Munsey's Magazine.  April 1902.
----------------------------------------------------------------------------------------------------