Fire Dance of the Navaho Indians

By GEORGE WHARTON JAMES
The author has spent nearly twenty years in the study of Indian manners and customs, and is now preparing an important work on the Havasupai Indians for the United States Government. In the present paper he describes his experiences at the Fire Dance of the Navahos, which few white men have ever seen. The article is illustrated with Mr. James's own photos., and with sketches specially made by experts of the United States Bureau of Ethnology. 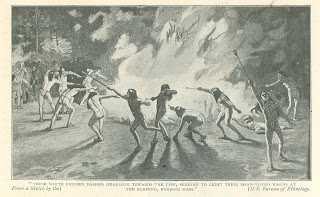 Americans are only just waking up to a consciousness of the wonders of their own country.  Twenty years ago the Grand Canyon of the Colorado was almost unknown. Ten years ago the Snake ­Dance, which I described in a recent number of THE WIDE WORLD, had been seen by but few white men. The cliff dwellings of that region were the subject of wild and exaggerated stories, and the life of the Indians themselves was simply a sealed book. 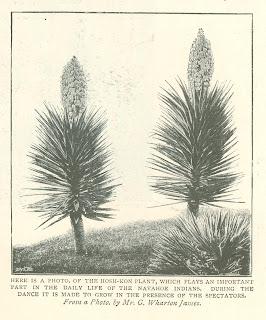 For nearly twenty years I have been study­ing Indian life in Nevada,Utah, Arizona, New Mexico, Colorado, and California; and many are the almost incredible things I have seen and heard during that period.  After the Snake Dance of the Mokis, perhaps there is nothing in my experi­ence so wonderful as the exhibitions. of magic given by the Navaho shamans and the concluding ceremony in their great medicine dance, known by some as the Hosh-Kon, and by the Navahos themselves as Dsil-yid-ji-cha-thal. It receives its name from the fact that in the magic ceremonies the hosh-kon, a species of yucca, is made to grow in the presence of the spectators. This plant is shown in our second photo, and plays a large part in the daily life of the Navaho Indian.
As in the Snake - Dance, the ceremonies consist of nine days' secret rites in the logan, or lodge of the priest, medicine - man, or shaman; and the ninth day at sunset witnesses the begin­ning of the magic performances, which last nearly all night, until, just at the darkest hour before dawn, the "Dance of Hell" - a veritable dance of fiends with fire - takes place. I know that my narrative will seem outrageously wild and untrue or at least exaggerated; but I can assure my readers that it occurs exactly as I have set it down. The reports of the few eminent scientists who have witnessed the ceremony confirm in every particular the result of my own observations. 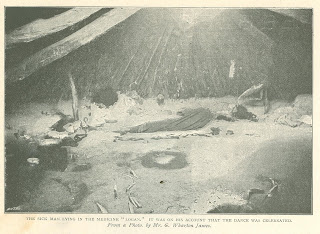 Few white men have ever seen the dance. in the first place, the Navaho is a scornful, proud, and haughty individual, who deems himself, not only the equal, but vastly the superior of any white man on earth. Knowing that the U.S. Government has set apart a certain reservation which belongs ex­clusively to him, he treats with scant courtesy the pale face who invades his private precincts with­out permission. Many a white man has paid for his temerity with his life as a result of heating the haughty Navaho in the same way as a brave belong­ing to a less self ­respecting tribe. Hence men nowadays are a little shy of in­truding themselves upon the secret cere­monies of this proud and warlike race.
The Navaho, too, hates to be the butt of any man's ridicule; and too often the white man lets him see that he considers his ­observances so much foolishness and silly superstition. This may be very true, but it is at least impolitic to say so in the presence of people who firmly believe that they, and they alone, worship in the right manner.
Now, as I rarely go anywhere without per­mission, and as I feel that the Navaho can only worship in accordance with his lights, I make it a point never to laugh or sneer at these Indians. They learned this long ago, and I therefore number among my warmest friends some of the leading shamans of the tribe, one of whom is shown in my next photo. Consequently when, in 1898, I was invited to be present at the great medicine dance given by a noted Navaho, who professed to be nigh unto death's door, I did not require a second invitation, out hastily took myself and my camera over the weary and desolate wastes and the wildly carved rock-region to tile northwest of the Navaho reservation. 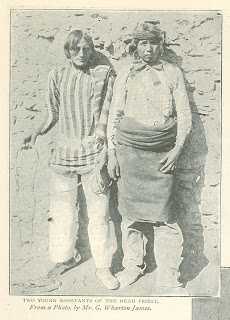 The first nine days were spent in weird ceremonies within the medicine logan, but these, however interesting to me, would take too long to describe and would only weary the reader. The interior of the logan, showing the invalid himself, covered with a blanket, is seen in the photograph on the next page.
I was pretty nearly wearied out when the last day arrived; and as I knew that we should be up all night I took an extra nap, and thus prepared myself for the crown­ing ceremony; During the day a number of old tree trunks of the pinyon, cedar, juniper, and buck brush were dragged to the chosen spot and there stood on end, thus making an immense pile no less than 250 ft. in diameter, and com­posed of the most inflammable materials. A portion of this huge stack is shown in the sketch on the next page. Now, as all the cere­monies take place in the open air, and after sunset, no photo­graph of them is pos­sible, and I have, therefore, reproduced sketches from. the pictures made by the distinguished experts sent to report on these performances for the United States Bureau of Ethnology. Their accuracy and truthfulness may therefore be accepted without hesitation.
Messengers - young Indians, such as are shown in our next photo, had been sent out by the head shaman during the week to the most noted magicians and medicine-men of the tribe, and a large number of them were assembled when the evening rites began. Some were detailed to perform one ceremony and some another; but each had his allotted task.