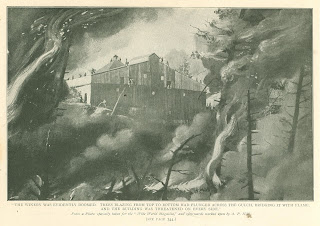 The fire which swept over the Santa Cruz Mountains on October 8th, 1899, was especially destructive, and to reduce it to sub­jection the entire mountain community came to the front. Many acts of heroism 'were per­formed, for information regarding which the writer is indebted to Mrs. Josephine Clifford McCrackin, a Californian author, who was entirely burnt out and upon whose vineyard grew some of the grapes whose juice later on did good service in saving the Meyer winery. I am also indebted to Mr. E. E. Meyer. The section of the Santa Cruz Mountains herein described over­looks the Santa Clara Valley, and is one of the richest in the entire State, as well as being the most beautiful. Only a few years ago it was virgin forest whose attractions were accidentally observed by a former German naval officer, Mr. E. E. Meyer, who decided to settle there. At that time the slopes were a mass of redwoods, firs, and madrones; and the location selected by Mr. Meyer was one of the most attractive in the whole range, abounding in deep and well wooded canyons, and provided with a fine water supply. Mr. Meyer is a leader in his community, and is highly esteemed and honored in Santa Clara County; and the heroic fight he made in the great fire, not only for his own home but also for those of others, shows that their belief in his pluck and valor was not misplaced. In fact, if the truth is told, this section of the State seems made up of men and women of remark­able qualities, in which bravery and true heroism appear to predominate. It was after great diffi­culty that Mr. Meyer established his winery, and then he spent years in waiting for the grapes to grow to maturity. Finally, however, success was assured.
Many others followed his example. Mrs. McCrackin, the lady already re­ferred to, in a letter to the writer says: "I remember well the enthusiasm with which we drank the first product of the little hand-press, and how proud we were of the first 5,000 gallons of wine which Mr. Meyer made. The hand-press was thrown aside after the first season, and ma­chinery, which I cannot describe except as 'new­fangled,' but of which Mr. Meyer is able, not only to name, but also to construct every bolt, wheel, and rivet, now fills the vast halls and engine-room of the winery. His own wine output has now reached nearly 100,000 gallons, and every season his acreage be­comes larger, and some new im­provement is introduced in the working ma­chinery." 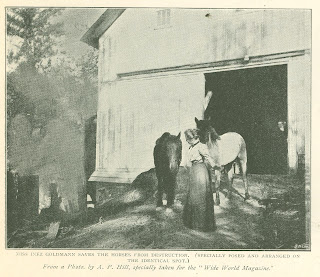 Mr. Meyer named his winery the Mare Vista, and today it is one of the best­ known in all America. His wine finds its way all over the civilized world. About 500 ft. from the winery Mr. Meyer built his home, and reach­ing away from it are beautiful grounds. Up to October 8th one of the grandest California hedged the place in. The drives to the house were through natural groves of trees centuries old; groups of laurel, ma­drones, and firs telling the story of the prodi­gality of nature in this country. The winery is a large, two storied building, with large trees growing to within 100 ft. of it. Here was all the valuable machinery, representing quite a large fortune, together with thousands of gallons of wine in all stages of age and development. This wine, however, was des­tined, not indeed to be bottled and sent East, but to be forced upon the flames of a terrific forest fire! The fire, it was believed, was deliberately caused on the other side of the mountain by some irresponsible and even criminal individual, who merely wished to burn some brush. A high wind, however, blew the flames forward, and in a short time a vast area was a raging sea of fire.
The moment it was seen that it was going to threaten life and property the men of the mountains turned out en masse. Some of them were on horseback, others in teams, with all the appliances at hand for fighting fire on a large scale. The men hurried to the threatened ranches. At two o'clock in the morning Mr. Meyer and his son were battling with the flames on the adjoining ranch of the McCrackins, and also on Dr. Goldmann's place; but the flames swept over the fifty acre timber tract, destroying the trees, burning the ranch house and forest cottage at the McCrackin estate, and driving the little band of fighters before them. 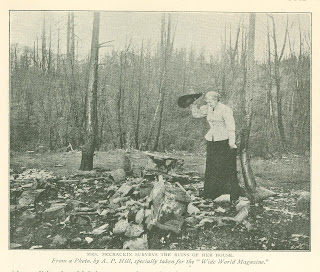 It was now seen that the Meyer house was threatened, and the weary men accord­ingly turned their attention to it. They had been fighting fire on the Goldmann place, and had been driven back on the McCrac­kin ranch. The fire at three o'clock in the morning was destroying the ranch house, and running down to lick up fifty acres of timber - land before six. So it may be imagined that the band of workers were well nigh ex­hausted before they turned their attention to the Meyer place. Mrs. McCrackin, who, almost surrounded by fire, was a witness to all the scenes described, says: "How utterly exhausted the men were after performing almost incredible feats of bravery it is impossible to say in words; only those who passed through such a furnace of blinding fire and stifling smoke can possibly understand and appreciate their condition."
The writer regrets that all the brave men who formed the little army beaten back by the advancing wall of flame cannot be mentioned. There were at least fifty, not to speak of women and children. They had seen tens of thousands of dollars in valuable vineyards go up in smoke during the night, and had witnessed priceless trees centuries old drop before the invader.
They had likewise watched orchards worth thousands, which had been years in maturing, melt away like thin air. Among these heroes were Frank and Louis Matty, sons of Mr. A. Matty, who was among the wealthiest land­owners in the vicinity. These gentlemen loaded all their wagons with tools and implements which might be of service in fighting the fire, and started to assist their friends and neighbors. With them were Messrs. Robert Borella, George Robishott, James Feely, Albert :Morrell, Fred Smith, and Pow King, together with Messrs. McKinney, Humferville, Montgomery, Wilson, Shane, Hoops, and other ranchers who are shown in the accompanying photograph. These brought with them the Frenchmen working on their vineyards - M. Patin and others.  "There were also men from Alma, ten miles to the west of us," said Mrs. McCrackin; "besides men from Soquel, ten miles to the south of us, who had left these water was their own places to help beat back the common enemy."
The roar of the flames was now so loud that men could not make themselves heard a yard or two away. The heavens were illuminated, and vast columns of smoke rose so high that they were seen fifty miles distant. There was not a fire engine for a great number of miles around, and no appliances for fighting flames except the ­small hose used at the ranch. The men began to. fear that the women would soon be surrounded, while the latter were in an agony of fear lest their husbands, brothers, and friends should fall victims to the waves of flames that seemed to come roaring on in every direction, licking up the trees. And the trees falling added to the horrors of the scene. The battle at Mare Vista was under the leadership of Mr. Meyer and his son, and no force was ever led with better strategy. A few men happened to be on the ground when the fire swept upon the ranch. Ying, the Chinese cook, proved himself possessed of no little forethought. Without orders he had collected all the vessels which would hold water, and at once an amateur fire brigade was formed, composed of the heroic wife of the owner and some guests. The grounds were literally mined with water pipes, and from passed in buckets by the little brigade, who devoted their energies to wetting the verdure. and ground, and trying to keep the flames from a ravine filled with trees, near at hand, which wound around the wine-cellars. 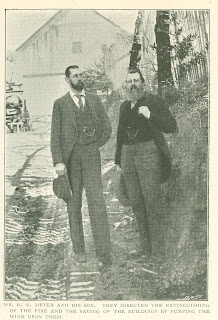 A fierce wind was now blowing, and the flames shot into the canyon like a fiery serpent and ate their way through it with incredible velocity. In a few minutes the building was surrounded with a crescent of fire. The sight at this time was altogether terrible. Great tongues of flame shot into the air, envelop­ing large trees and setting them ablaze at once. It was almost impossible to face the conflagration, and those who did had narrow escapes from death. The winery was evidently doomed. Trees blazing from top to bottom had plunged across the gulch, bridging it with flame, and the building was threatened on every side. Mr. Meyer had long before this placed men at the water hose, of which there were two, and for some time this seemed successful, and the men kept the fire away from. the main building, although facing a fiery furnace in the effort.
But a new danger soon became apparent. On the west was a small canyon, into which the flames were seen eating their way with resistless force. They came on with a roar, licking up the largest trees, encircling and devouring groups of beautiful madrones, giant oaks cen­turies old, and then sped on in the direction of the house itself, following the driveway. The house was surrounded, but saved by the fire fighters, partly by the heroism of Mr. Frank Matty and others, who crawled through the brush, up the Soquel Creek Canyon, and with a bucket brigade fought off the flames.
This done, the Chinese cook and his assistants ran to the winery, which was now threatened with destruction, the wind blowing a gale from the north. It was about noon, and many of the men had been battling with the fire from the early hours of the previous morning, and were therefore nearly exhausted. The sun was red in the sky, and seemed to add to the terrors of the situation by its burning heat. Men faltered and almost lost their reason, and the deeds accomplished by every fir~-fighter in the little moun­tain brigade if witnessed in a city would have made each man a famous and much­ chronicled hero.