Carlisle D Graham Over Niagara Falls in A Barrel 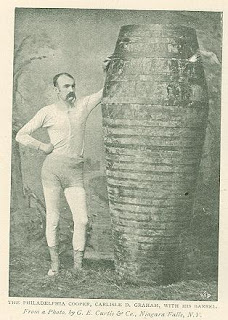 In 1886 a Philadelphia cooper named Carlisle D. Graham became imbued with the idea that he would risk his life in the rapids in a barrel of his own construction. He built the barrel and traveled to Niagara. On Sunday afternoon, July 11th, 1886, Graham entered his barrel and made the trip in safety, going right away through the gorge to Lewiston. His success was applauded all over the world. His confidence in his own handiwork had not been misplaced. He was about thrity-five minutes passing down the river. Graham won great popularity, and all who knew him said he deserved it.

Then Graham became more daring, and on Thursday, August 19th, 1886, he made the trip through the whirlpool rapids as far as the whirlpool with his head protruding from the top of the barrel. In this, as well as in the first trip, his body was suspended in a hammock swung on the inside of the barrel, so that he could not strike the sides with any great force. Graham's barrel was long and high. It's narrow bottom was well weighted so that it would stand upright in the water. Thus Graham virtually assumed a standing position on the inside of the barrel. His trip through the rapids with his head protruding required unlimited nerve, for then he could see when he was in the midst of the roughest waters, and had his barrel not been bouyant enough to keep him above the waters he must have drowned.

Graham made a third trip on June 15th, 1887, and a fourth trip on August 25, 1889. In the last trip he used a much smaller barrel than on any of his previous trips, and passed through the gorge to Lewiston. He won more fame for his trips than any other person. All of his trips were witnessed by immense crowds, and it may be said of Graham that he never disappointed a Niagara audience. He was always to time. Following his fourth rapids trip, Graham announced his intention of going over the falls. He sent several barrels over the cataract to study the currents, and all but one were lost. The morning papers on Monday, September 2nd, 1889, told how Graham had gone over the falls on Sunday, September 1st, but it was a journalistic "fake." Graham afterwards stated that he had had a barrel sent over the falls that morning, while he watched in an eddy below for its coming. The barrel was smashed into small pieces, and, as he said himself, he had not the audacity to claim he came over the falls in any one of them.