By MRS. HERBERT VIVIAN.
Amongst the mountains of the little Austrian Duchy of Salzburg dwell peasants who still mingle religion and mythology in a curious jumble and observe many remarkable customs. Perhaps the most extraordinary of their festivals is the Perchten dance, which is performed only at very infrequent intervals. Mrs. Vivian was fortunate enough to witness the latest celebration of this unique function and secure a set of striking photographs. 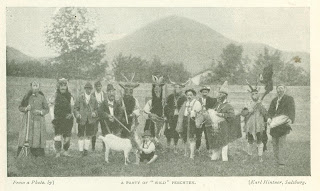 There is probably not another place in Europe where so many strange customs, survivals of heathen and medieval times, are gathered to­gether in a small tract of country as in the Austrian Duchy of Salzburg. Amongst those wonderful mountains and valleys live peasants who still mingle religion and mythology in a mystic jumble. Folklore attracts me like a magnet, and, therefore, I can scarcely bear to let a summer pass without a visit to such a rich treasure-house of legends and the like. Last year, on my way from Marienbad to the Danube, I stepped aside at Linz and ran down to Salzburg for a day or two. The weather was ideal, the old haunts as fascinating as ever; but, best of all, I discovered that in a few days time a country fair would be held in a village nearby, famed for its loveliness. At this fair both the "beautiful" and the "wild" Perchten would dance their strange dance. I had heard rumors concerning this extraordinary cere­mony for years, but as it is only performed at irregular intervals - sometimes of twenty years.­  I had never yet had the opportunity of seeing it. Every plan and engagement for the near future was ruthlessly thrown aside, and I deter­mined to stay on in Salzburg at any cost.
The Perchtentanz is named in honor of Perchta, another name for Holda or Freya, Woden's consort and the mother of the gods. Although banished from many of her ancient haunts by rude civilization and unbelief she still clings to Salzburg and parts of the Tyrol, where the peasants not only believe in her, but fear her. Perchta means the Splendid, the Magnificent One. She may be seen, they say, wandering through the great fortress of Salzburg at dead of night. Towards the beginning of the year, in the guise of a tiny, wizened witch, with gleaming eyes, long hooked nose, and wildly tangled hair, she lurks at crossroads, waiting for travelers. When one approaches she greets him, with her friendliest smile, and holds out to him a black cloth. If he takes it he is done for, and will certainly not survive the year; but if he brings out his cruci­fix and says, "Dame Percht, Dame Percht, throw the cloth on the earth," then every joy and blessing will come to his house. 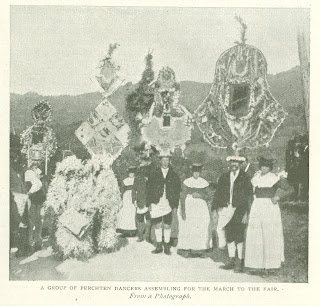 If Perchta shows herself in a stable, sickness and death are sure to follow, unless the careful peasant hangs up a bunch of consecrated St. John's wort, a potent herb in these lands. On other occasions the goddess gathers all the un-baptized children round her, and sweeps through the country at the head of the band. At Christmastime a spoonful of every dish used to be placed on a fence, or a gate, outside the house as an offering to this much dreaded lady. One of the strangest things about Perchta is that she has a double nature. Sometimes she is the soul of goodness and charity, at other times she is full of hate and malice to man­kind. Men are fascinated by her, but their feelings are mixed, and fear is mingled with longing fear on account of her un-canniness, and longing because of her wondrous powers.
Perchta has her troops of followers, strange beings half-way between mortals and immortals, These do not live among the children of men, but appear amongst them at such times as Advent and the Feast of the Three Kings. Like Perchta herself, they are divided in disposition, for some are good, kindly creatures, such as the "beautiful" Perchten (Schiin Perchten); while. others, like the Schiachen Perchten, are wild, irresponsible, malicious things. They are more felt and heard than seen. In swarms they come down on men's dwellings, and are recognized by their weird screams and laughter. They love to draw men into danger by alluring sounds and spells, and to punish undiscovered crimes. The Perchten dances originated among the peasants of the mountains, who desired to imitate these mythological beings, but of late years the per­formances have seldom been seen. In 1867 there was a display, and then nothing till 1892. The cost of the affair is so high that only the rich farmers can afford it, for the headdress of a "beautiful" Percht sometimes costs between thirty and forty pounds. 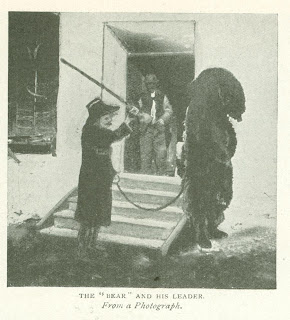 On the day of the fair I had to be off early in order not to lose any of the fun. The special train started soon after seven, and on Salzburg station I found a collection of the notabilities of the district - mayors in frockcoats and top hats, local squires and mag­nates in the becoming Tyrolese costume of green tweed coats and breeches, and jaunty green felt hats adorned with cords and a saucy little eagle's feather tucked into the band at the back.
Past marvelous moun­tains and through wonder­ful passes we went, till we found ourselves in the most romantic part of the Tyrolese Alps, just half­way between Dachstein and the Gross Glockner. A jingling little victoria took me up to the fair ground. Here, although so early in the day, people were running excitedly about, flags were flying, and prize cows were ]ow­ing. Women in quaint garb - black patent ­leather sailor hats and very big white aprons­ and men in green loden wandered round, exploring with immense interest the little wooden booths, Some bought from a red hot grill long strings of the little hot sausages (wiirste) so dear to the Austrian heart; others danced slow and solemn waltzes in the big summer houses with sides open to the air. 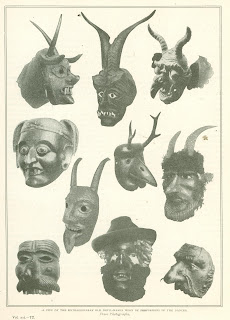 As I was quite alone and knew nobody, I had now to find out when the Perchten dances took place and to try to wheedle someone into allowing me to see the dress rehearsal and take some photographs, Just then I caught sight of several young men in top hats and frock coats adorned with huge rosettes. Nobody could possibly put on a silk hat from choice on a roasting summer day, I argued, so they must have something to do with the show. With some trepidation I pounced on one of them, who wore a benevolent expression, and begged for information. Nobody could have been kinder, but at first it seemed as if he could not enlighten me much. I became almost tearful at the idea of returning with no spoils of war, for I knew well that once the Perchten arrived at the fair there would be no getting anywhere near them, and crowds at least four deep would separate my camera from its, prey. Presently, however, he became more hopeful, a friend of his was arranging the dances, he said, and he would see what could be done. With as many apologies for bothering him as I could muster in German I retired to an open air cafe, where I tried to while away the period of waiting by drinking many coffees with whipped cream floating on the top.
Time was getting on, so I wandered round the show again, gazing at immense cart horses, prize oxen, and the giddy merry go round. To my relief I caught sight of my young friend (who I now discovered was the sub-prefect of the place), accompanied by another cheerful ­looking youth.
"Here is the gentleman who is arranging about the dances," he said; "he will tell you what can be done." 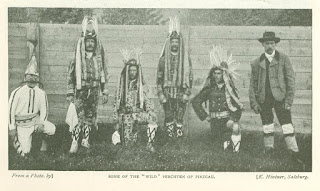 The cheerful young man had evidently had little experience of the trials that befall a photo­grapher, but after some persuasion he agreed to let me see the dress rehearsal, which was to take place at a farm some little way off.
"Meet me at the bridge at three," he said, " but I shall not be dressed like this. I shall be clad in green loden from top to toe. So prepare for the transformation! "
At three o'clock punctually I was on the bridge, and here I sat for some time watching the dear old town, with its wooden houses, and the great mountains all round. Presently a boy touched me on the shoulder. My cicerone had kindly sent a chariot for me, which drove me to an old farm-house on the outskirts of the town. Here I found him surrounded by a motley crew of people in masks, whom he was striving to keep in order.
"Now, what do you want to snapshoot?" he said. "There is plenty of choice. Will you have a chimney sweep, a bear, a bundle of wood shavings, or a village idiot?" 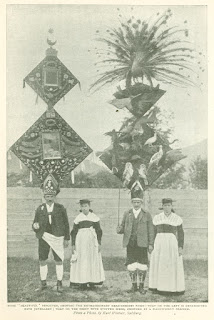 Everybody entered into the spirit of the game. A rag picker clasped his temporary wife - a man in female clothing, of course, about double his size wildly to his arms, with shrieks of "My darling Eliza," and the village idiot sank in a huddled mass against the wall. All wore the most repulsive masks and the strangest collection of tatters, and darted about, letting off squibs, brandishing sticks, and ringing large and peculiarly penetrating bells. For all their hurry and scurry, however, they were most polite and kind to me, and were ready to pose for any groups I wanted.
Presently there was a stir. The "beautiful" Perchten were arriving. Nothing could. be more fantastic than the appearance of these gentlemen. The pictures describe them far better than any words of mine can do. The lower part of their costume is unobtrusive, and all one's attention is centered on their heads, which are crowned with what surely must be the most immense and eccentric head dress in the whole world. Two diamond. shaped boards, in all some ten or twelve feet high, are covered with red velvet. On them are fixed dozens of silver watches and chains and every kind of orna­ment the Perchten have been able to collect or borrow - looking glasses, artificial flowers, pictures of the Virgin, bracelets, necklaces, and coins. At the top comes a crown, above that a moon, and then again a star. 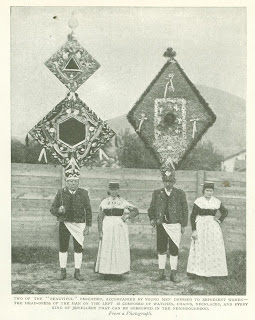